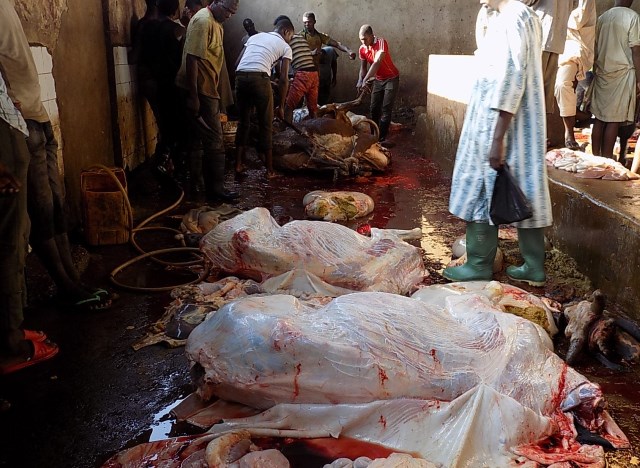 Fashion Influencer, Obisora Shares Three Ways You May Be Causing Harm To Your Skin

Abuja vet doctors under the auspices of Nigerian Veterinary Medical Association, NVMA, have raised alarm over looming disease outbreak from abattoirs due to unhealthy practices going on in those facilities.

This was contained in its recommendation as part of communiqué issued and made available to Vanguard, which was signed by the Chairman, Communiqué Drafting Committee, Dr. Sunday Makama, including the secretary, Dr. Oladotun Fadipe, member, Dr. Peter Adeyanju, and Dr. Gloria Daminabo, after a National Workshop on Food Safety in Nigeria, which organised by NVMA.

The vet doctors also pointed out that most health challenges faced by Nigerians are traceable to unsafe food and animal consumption, which developing countries bear most of the burden of food-borne diseases and illnesses with over 91 million morbidities and 137,000 human deaths annually.

The communiqué reads in part,

“Global food safety directly depends on animal health and the environment. Unsafe food including the food of animal origin is the cause of more than 200 diseases, 50 million morbidities and 230, 000 mortality yearly across the world.

While developing countries bear most of the burden of foodborne diseases and illnesses with over 91 million morbidities and 137,000 human deaths annually, but yet under-reported.

Deplorable state of infrastructure in the nation’s meat industry especially abattoirs /slaughter slabs and processing facilities and calls for urgent action by Government at all levels to remedy the ugly situation in public interest.

Food safety practices and standards in Nigeria are inadequate and this increases the risk of biological and non-biological contaminants in animal-sourced foods.

Abuse, misuse and overuse of veterinary antimicrobials in livestock farming operations could lead to adverse consequences such as the increase in AMR, drug residues in foods of animal origin and illnesses in human consumers.

The slaughtering of unhealthy animals for human consumption and urge stakeholders to improve on the transportation condition of animals and handling of meat and meat products.”

They also recommended that there is an urgent need for national harmonization of legislation on meat hygiene to safeguard the health of Nigerians including adequate sensitization should be carried out to create awareness about the dangers of unhealthy meat processing. The experts say:

”The harmonization of the national legislation on meat hygiene instead of the segmented regional (state) approach that is no longer effective in handling current challenges.

That banned and unauthorized chemicals and biologicals should not be used in the livestock industry and regulatory agencies should enforce compliance. The use of the one-health concept approach to mitigate the challenges of Food Safety and stakeholders are encouraged to begin the promotion of interdisciplinary engagements, beyond the multidisciplinary approach.

Education or awareness creation for all stakeholders on best practices in food safety especially in engaging in interactive and efficient risk-benefit communication to the public about food safety and quality; optimizing consumer protection as one of the major goals of food of animal origin trade; national food control systems should enforce and ensure compliance with current food safety standards.

Registration of all food production, processing and marketing premises by relevant MDAs according to existing regulations for effective monitoring and evaluation of practices, antimicrobial usage, and disease surveillance among others.

Stakeholders engaged in Food Safety efforts to link up and register with the AFoSaN; promotion of the use of good management practices, biosecurity and alternative intervention to mitigate future health threats or pandemonium that may be associated with increased reliance on antimicrobials by livestock farmers in the country.

National commitment and integrated multi-sectoral and multi-disciplinary approach and efforts to build strong and resilient national food safety systems for a comprehensive farm to fork approach to identification and management of food safety risks, especially from production (farm) to market.

Promotion of data-driven research to provide sufficient scientific evidence for the development of an intervention to the food safety concerns of the consumers.”