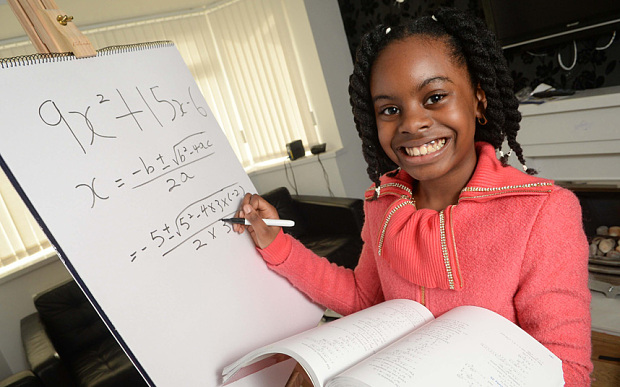 A dictionary definition that describes a genius as someone with exceptional intellectual or creative power or other natural ability rings exceedingly true for Nigerian born math prodigy, Esther Okade, 13. According to reports, Esther who lives in Walsall, an industrial town in the UK did not attend a formal school as she was home-schooled by her mother; Omonefe Okade simply called Efe, who happen to be a teacher and a mathematician.

Esther sat for GCSE at 6 and made an excellent result despite being homeschooled. The genius child is set to bag her PhD before 14  following her enrollment in Open University when she was 10 years old. She’s 13 and studying financial math.   Esther first made news across international media in In 2015 and was hailed a math genius, since then, she has not looked back.

The young girl was said to have grown up like every other girl-child of her age as she loved playing with Barbie dolls and dressing up as Elsa from Frozen but aside that she is above her age mate and peers academically. She started school like her age mates but the once vibrant girl changed drastically and luckily her parents noticed the change and decided to teach her from home.

At six, Esther took math GCSE, a task generally undertaken by 14 -16-year-old in the UK and passed. The genius loves math so much that she wrote a book series titled Yummy Yummy Algebra. She started her university course on an excellent note as one of the youngest undergraduate students and was already top of her class, getting a perfect score in her first exam.

Talking about her university course of study, financial math, Esther said she wants to finish the whole course in two years and wants to own a bank by the time she is 15 because of her love for numbers. She claimed she likes people and banking is a way to help them.

READ ALSO: Why 10-Year-Old Emmanuela Mayaki Was Offered A Teaching Appointment At A UK School

“I want to (finish the course) in two years. I want to have a bank by the time I’m 15 because I like numbers and I like people and banking is a great way to help people.”

Having perfect scores in her courses, she is to obtain her Ph.D. before she turned 14. Esther’s academic excellence has been profiled by various international news media.

This is a Nigerian maths prodigy. In 2015, Esther Okade was reported by #CNN to have enrolled in a British university at age 10, and was top of the class against 24-year olds. She is now working on her PhD on maths to be attained at 15,and a plan to own a bank soon before age 16. pic.twitter.com/XICQzGDBc5