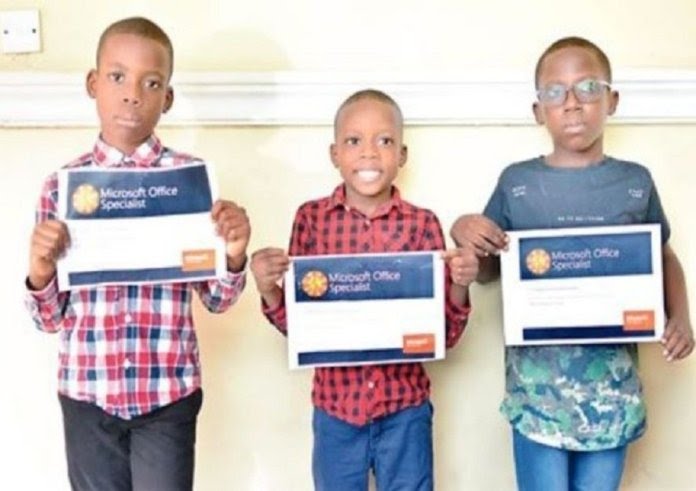 BBNaija: Nigerian Lawyer, Awele Ideal Shares Her Moving Life Story To Dismiss Claims That Ex Housemate, Tacha’s Unruly Behaviour Is Because She Has No Mom

A six -year- old Nigerian student, Master Damilare King-David Akano, has emerged the youngest Microsoft specialist in the international certification examinations organised by Certiport held on Saturday August 17, 2019. Damilare came tops in the Microsoft Office PowerPoint 2016 examinations with a score of 871 out of 1000 points followed by Toluwalese Ayoola Kwaku, a 10 years old boy, who scored 825, while Kolawole Praise Akano, an eight–year- old, scored 800.

With this performance, Damilare King- David Akano, a primary one student has become the youngest in Africa in 2019, to achieve this professional height, and indeed, one of the youngest in the world to achieve this feat. The two brothers, Damilare and Kolawole and their friend, Toluwalase, are students of Scholar Crest International, Omole, Lagos among others who participated in the on- going 2019 New Horizons summer camp across Nigeria.

In Nigeria, New Horizons empowers over 50,000 students to success yearly in over 100 schools and 15 universities. Among the schools powered by New Horizons are Dansol International Schools, Doregoes, Vivan Fowler and Princeton College Surulere, among several others.

According to MD/CEO of New Horizons, Mr. Tim Akano, the achievement of the six-year- old Damilare King-David Akano, is just a continuation of the tradition of excellence which New Horizons is known for both in Nigeria and globally.