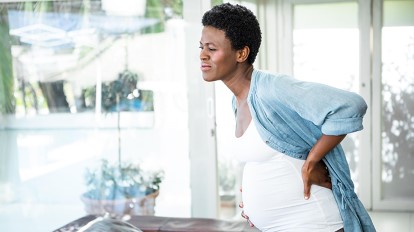 All You Need To Know About How To Have Safe Sex During Pregnancy As These First Time Parents, Olushola and Kike Kolawole, Share Their Experience

A consultant obstetrician/gynaecologist, Dr. Abosede Lewu while delivering a lecture on “Maternal Mortality: Placenta, The Position and Complications,” at the maiden edition of Safe Motherhood Initiative (SMI) and official launch of the Sanusi Cares Foundation (SCF) elaborated on some of the complications that may present during a pregnancy causing bleeding and may be death, if not properly managed.

Dr. Lewu said it was important for any woman who notices any unusual sign in pregnancy to report to her doctor or the nearest Primary Healthcare Centre (PHC), for proper check-up. The obstetrician/ gynaecologist revealed that placenta complications as a result of shift from its normal position (placenta previa) or partial/complete detachment from the womb (placenta abruption) could lead to the loss of the baby or mother or both. This the expert says contributes to maternal mortality rate as some pregnant women bleed to death if early interventions are not sought.

Lewu said although it is not clear how many women are affected with placenta complications, the situation is very dangerous and requires early presentation and intervention. One of the women who have gone through placenta abruption and came out safely, both mother and child was Mrs. Janet Sanusi.

Having pulled through successfully without a loss of life, her husband, Mr. Rasaq Sanusi decided to launch the SMI as an arm of the SCF, a non-governmental organisation with the aim of reaching and sensitising women on the dangers of placenta complication and solution.

Speaking further, Sanusi, who is also the founder said the foundation plans to reach and sensitise no fewer than one million women on health issues bordering on safe motherhood, with a particular interest on complications of the placenta.

He said the long term goal of SCF was to assist people in his immediate community, Lagos State and Nigeria by extension through health and environmental advocacy and awareness programs as well as empowerment initiatives.

“The foundation was born as a result of the challenges my wife underwent during pregnancy and the word “complications” was mentioned, that is placenta previa, but later diagnosed to be placenta abruption.

She was referred from Randle General Hospital, Gbaja, to Lagos University Teaching Hospital (LUTH) on December 31, 2017 after spending up to seven days on bed rest. Glory to God, she and the baby survived.”

Affirming that but for early intervention, the baby and mother or even both would have been lost, Sanusi regretted how a lot of pregnant women lose their lives to pregnancy complications, majority of which could have been averted if it were diagnosed early.

Placenta previa, Lewu explained occurs when the placenta is attached to the lower uterine segment due to low level of implantation of blastocyst.

One ugly thing about this complication is that it can cause severe bleeding during pregnancy and after birth.

A woman who is diagnosed with it might be advised to avoid any activity that might cause contraction which include; douching, sex or things that might increase bleeding such as jumping, squatting and running.”

Physician, Dr Olakunle Moteemi Warns That These Signs In Pregnancy Could Mean Danger

“Although its cause is unknown, placenta previa is common among women who are age 35 and older, are of race other than white, smoke, had placenta previa during previous pregnancy, are carrying more than one child or has scar on the womb.”

For placenta abruption, the gynaecologist and obstetrician explained that hence it is the placenta that supplies the baby with nutrients and oxygen, its partial or complete separation might lead to decrease or total loss of oxygen and nutrients supply to the baby.

“A woman who has placenta abruption might experience abdominal pains, vaginal bleeding, and shock, non perception of fetal movement or even death.”

Just like its counterpart, there is no known cause of placenta abruption but there are actions that might trigger it and they include; uterine fibromyomas, smoking habit, a hit on the stomach or a fall, hypertension in pregnancy, lack of rest even when it is advised, advanced maternal age and premature ruptured membranes.

“You can’t give a specific figure to placenta previa because quite a number of women do not go for antenatal and don’t do scan because it is something the scan can pick before they start bleeding.

In our own book, they say it is as high as two per cent of pregnancy, but it may be more than that because it is only when they come to the hospital that we can know and have documentation.”