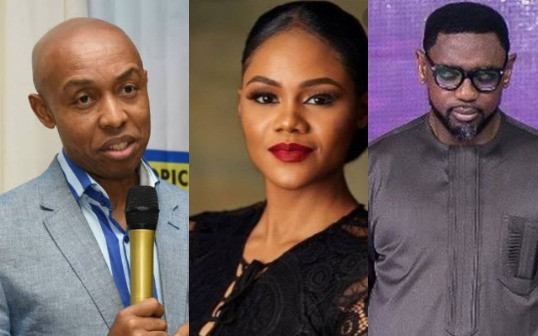 In a new article he wrote titled ”Busola Dakolo: In Praise of Soft Vengeance”, the former Chairman of the National Human Rights Commission (NHRC), Chidi Odinkalu shared his unhindered views on the rape allegation that caused a national uprising.

Chidi Odinkalu, the former Chairman of the National Human Rights Commission NHRC, has said that the Senior Pastor of the Commonwealth of Zion Assembly COZA, Biodun Fatoyinbo, may have won in the rape case filed against him by Busola Dakolo at the Abuja High Court but his name is in ruins and he might never be able to clear the rape allegation leveled against him by Mrs Dakolo in the conscience of the people.

Recall that in June this year, Nigerians woke up to news of an alleged rape by celebrity mum-of-there,  Busola Dakolo where she revealed quite emotionally that she was raped many years ago by the Senior pastor of COZA Church, Biodun Fatoyinbo.

Busola, with the help of her husband, Timi Dakolo and other well-meaning Nigerians then took the matter to court seeking a redress. The outcome of the case saw an Abuja-based court throw out the matter earlier on grounds of it been baseless.

Read the full article below:

Busola Dakolo, a mother of three who grew up a gifted child was the unlikely heroine in this script. She first laid bare her claims in an interview with Chude Jideonwo, lawyer and co-founder of the digital platform, YNaija. These claims later became the basis for her civil claim filed at the Abuja High Court on September 6, detailing harrowing allegations of rape perpetrated against her by Pastor Biodun Fatoyinbo, best known as the senior pastor of the Commonwealth of Zion Assembly (COZA). The acts took place on 23 and 26 September 2002.

To be clear, this was not the first time allegations of sexual predation had been made against this pastor. Mrs. Dakolo’s allegations, however, felt different. They were detailed; as a married mother, she had very little to gain from making these allegations public and an awful blowback was both predictable and to be expected from partisans and propagandists of the alleged perpetrator.

The first incident of sexual assault allegedly took place when she was 17 in her parents’ house in Ilorin, Kwara State. Neither parent was at home and the pastor knew this. She had never experienced sexual intimacy before then. She looked up to the pastor as her “Spiritual Father”. The facts would suggest that the alleged perpetrator probably groomed her for this moment. After the sexual act, he reportedly gave her a bottle of “Krest”, a lemonade-flavoured soda and forced her to drink it. There was a second incident which reportedly took place in or on a car. As a young Christian girl from a polygamous home, Busola Amupitan, as she was when these sexual assaults reportedly took place, initially was unable to confide in anyone about these crimes.

In the end, Mrs. Dakolo sued before the civil courts. A mere nine weeks after her case was filed, Justice A.O. Musa, sitting on the outskirts of Abuja in Bwari, delivered a ruling on the outskirts of the jurisprudential season, holding on November 14 that it was statute-barred. Under the applicable laws, he ruled, such cases must be filed not later than 75 months (six years and three months) after the act complained of. Having dismissed Mrs. Dakolo’s action, the judge then added: “…what we are now left with in this suit is sentiment. This suit is soaked in emotions and ferried into this court by the claimant riding on the thick clouds of bourgeoning sentiments”, claiming that it will “occasion grave miscarriage of justice” to ask the pastor to answer to these claims after 16 years.

This ruling raises many questions about the state of both law and procedure concerning sexual assaults in Nigeria, especially, one reported so many years after it happened. As the world marks the International day for the Elimination of Violence Against Women, it is important to return to these.

Criminal proceedings, if one were to take place, become a trial, not of the alleged perpetrator, but an ordeal for the victim, in which her intimate life is subjected to humiliating micro-examination for the purpose of granting the perpetrator a free pass.

In principle, there is no limitation on criminal prosecution for rape or sexual violence. The fact that the allegations in this case happened long ago does not preclude an investigation or, if evidence of rape is in fact unearthed, of prosecution. Achieving such an outcome, however, would be dependent on overcoming some constraints of law, evidence and practice.

Let’s begin with the broad regime of laws affecting rape and sexual violence in Nigeria. At present, Nigeria has a multiplicity of sources of laws on rape and sexual violence. There are at least five. In the Federal Capital Territory, the Violence Against Persons (Prohibition) Act (VAPPA) of 2015 has a robust definition of rape as a crime that can be committed by both men and women and involves penetration of any bodily orifice. Nine states – Anambra, Benue, Ebonyi, Edo, Ekiti, Enugu, Kaduna, Osun, and Oyo – seven in the south and only two in the north – have adopted the VAPPA. In nine other states of Southern Nigeria, the Criminal Code applies. Separately, Lagos State enacted a Criminal Law in 2011, which defined rape in terms that both anticipated and resemble the VAPPA. 12 States of Northern Nigeria that have adopted Sharia also recognise a Huddud crime of rape. Additionally, the Penal Code remains applicable in 17 States of the north in relation to the crime of rape.

Both the Criminal and Penal Codes are Victorian pieces of legislation, the gist of whose prescriptions on sexual violence were defined in the last quarter of the 19th century during the reign of Queen Victoria. By the way, she died in 1901. In the terms alleged, the crimes against Mrs. Dakolo took place in Kwara State, where the Penal Code is applicable.

Section 282 of the Penal Code defines the crime of rape as comprising four essential elements:

The two most important of these four elements are the physical act of penetration and the communicative act of lack of consent. Every investigation of rape invariably turns on these, making rape a trial of the body of the woman or victim.

Rape typically occurs outside public view. Overcome invariably by personal feelings of guilt and filth, victims are often too ashamed in the immediate aftermath of the crime to confide in anyone. As a result, rape kits are often not performed until after loss of biological evidence. By the time a rape kit is performed, essential biological evidence would have been lost, making the likelihood of effective investigation or successful prosecution rather low or non-existent. Criminal proceedings, if one were to take place, become a trial, not of the alleged perpetrator, but an ordeal for the victim, in which her intimate life is subjected to humiliating micro-examination for the purpose of granting the perpetrator a free pass. Unsurprisingly, many victims, unwilling to subject themselves to such ordeals, would rather nurse their violations and not report rape.

This is the context for assessing the ruling dismissing Mrs. Dakolo’s civil case. The victim was too young at the time of the alleged incident. The judge, having held the case was statute–barred, went on to venture gratuitous put downs that did not do him a lot of credit. He rendered judgment with neither compassion nor humaneness and was too enthusiastic to lay into the victim. The award of punitive costs against her counsel (in the sum of one million naira) appeared rather uncalled for at best.

…the definition of rape in both the Criminal and Penal Codes is clearly very outdated. It makes the crime near impossible to prove. To achieve this, VAPP Act needs to be taken to all the States and made the standard all over Nigeria. This will make it possible to harmonise the laws of sexual offences across the country…

Whatever the difficulties of proof, cases like Mrs. Dakolo’s remind us of the need to scale up rape law reform in Nigeria. Some basic steps can help.

First, the definition of rape in both the Criminal and Penal Codes is clearly very outdated. It makes the crime near impossible to prove. To achieve this, VAPP Act needs to be taken to all the States and made the standard all over Nigeria. This will make it possible to harmonise the laws of sexual offences across the country, eliminating the confusion that presently exists. The Conference of Attorneys-General in concert with the inspector-general of Police can commit to legislating to make this possible.

Second, at present, the law allows evidence of the sexual or intimate histories of victims from the proceedings but mostly precludes such evidence on the part of alleged perpetrators. This incidence of the laws of evidence in rape proceedings in most jurisdictions in Nigeria can be reversed by amending the relevant laws in all the states other than Lagos where this has already been achieved.

Third, in civil cases alleging the rape of minors – as in persons under the age of 18 – or culpability of persons in authority over the victim (as in a pastor), it should be possible to allow for a doctrine of continuing violation triggering the commencement of computation for limitation purposes from either the attainment of majority or the end of the power relationship between the victim and the perpetrator (whichever is later). If this requires updating legal doctrine or amending the statute of limitation, then it should be done.

Fourth, predictably, propagandists for the alleged perpetrator have gone to town with unfounded claims of his exoneration. That, sadly, is far from what has happened. It is impossible, however, for victims in cases such as this not to feel let down by the system. We must invest in weaning judges through training of a prevailing Victorian mind-set about remedying rape.

Pastor Fatoyinbo may have achieved a technical legal victory but it has left his name in ruins. He may never be able to clear himself of allegations that he is a rapist. That is a terrible burden for a “Man of God” to live with, a testament to the soft vengeance of Busola Dakolo’s incredible courage.”