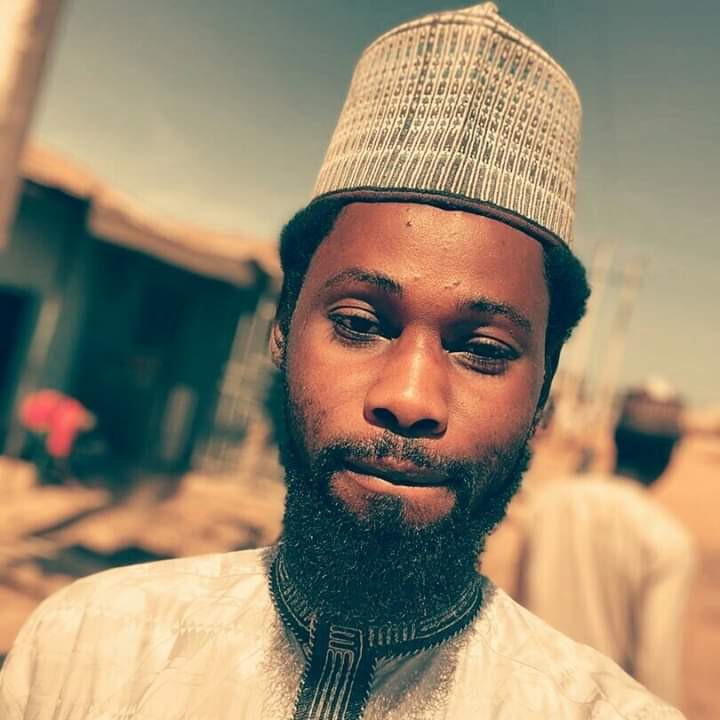 Perfumer, Wale Aladejana Shares Profound Thoughts On Why It Is Crucial To Identify Your ‘Poison’

There has been much outcry about the plight of the girl child in Nigeria but particularly in northern Nigeria, and while it seemed that it bothered everyone else except the northerners, a young man from the northern extraction has spoken up about teenage and out-of-wedlock pregnancies in that part of the country; he also proffered solutions. The man, Aliyu Jalal, a graduate of Ahmadu Bello University took to Facebook to write about the importance of sex education in Northern Nigeria following reports on the rapidly increasing cases of unwanted pregnancy.

Mr Jalal in his very insightful post said the shame and stigma of an unwanted pregnancy in the north is borne by the girl alone, even though the act leading to it involves a man. He was writing in response to the enactment of a bye-law banning members of the opposite sex from meeting at night due to rampant cases of out-of-wedlock pregnancy among girls in the Kirikasamma Local Government Area of Jigawa State.

“A local government in Jigawa State has banned men and women from meeting each other at night because there are too much cases of out-of-wedlock pregnancies in the area.

But they can meet during the day because pregnancy is not possible when the sun is out.

Pregnancy enters only when it’s very sure it’s the moon and the stars in the sky.”

READ ALSO: Child Brides: Emir of Shonga, Haliru Yahaya On Why Northerners Are Resisting The Legal Age Of Consent

In his lengthy piece, Jalal says banning opposite sexes from hanging out at night will not stop men from taking advantage of young girls. He reckoned that it may be difficult for the typically conservative Hausa parents to look their children in the face and discuss sex, so he advised, they engage aunts and uncles to intervene in providing sexual education to their kids, especially the girls.

”The Imperative of Sex Education In Northern Nigeria
By Aliyu Jalal

“No other person needs sex education than a northern Nigerian girl. It’s something done by two people, but when it goes wrong – such as an unwanted pregnancy – she alone carries the shame and the stigma. Sometimes to the rest of her life.

Perhaps this can explain one of the reasons parents seem to be more obsessed with the movements of their female children than boys, because boys have the biological advantage of using their penises without the possibility of bringing home a tangible proof of it.

Indeed it’s a worrying phenomenon for the people of that Jigawa community who in their effort to stop this outbreak of family shame, succumbed to imposing a night curfew between men and women. But the effectiveness of this obviously weak regulation is like the scripting of another tragicomedy.

It will not stop people who want to use their private parts from using them whether at night or in the day. In fact somebody was telling me yesterday that in those type of villages, it’s mostly between next-door houses where the pregnancy cases happen.

So how does a local government authority makes sure that two people from neighboring houses do not see each other at night?

I think one of the solutions is in disseminating sex education to children from the age recommended by child development psychologists.

It’s agreed that parents are the best agents of it, but if our Hausa Fulani parents cannot look at their children in the eye and speak to them about some organs of the body and the issues that come with them, they can extend it to uncles, aunts or any other confidant to do it. Schools can also try their parts. Both religious and secular.

But it’s worrying that adults in that community don’t know how to prevent unwanted pregnancy in this age and time, not to mention HIV and other STDs.

And yes it would be good if they’re also reminded that sex is an after-marriage thing. So they should learn to hold their bodies like “true” Arewa children. “ 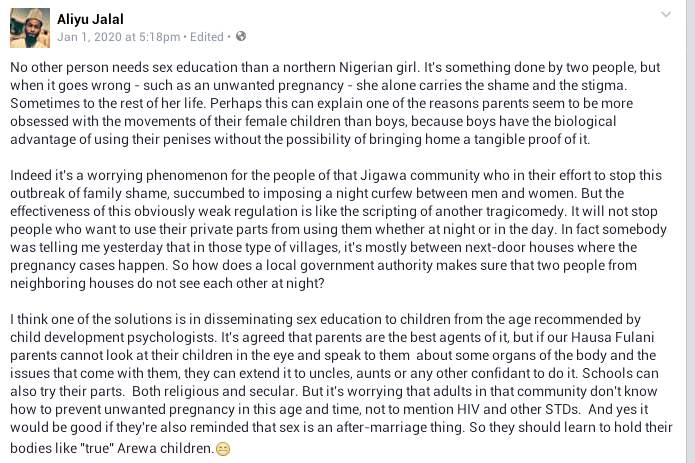