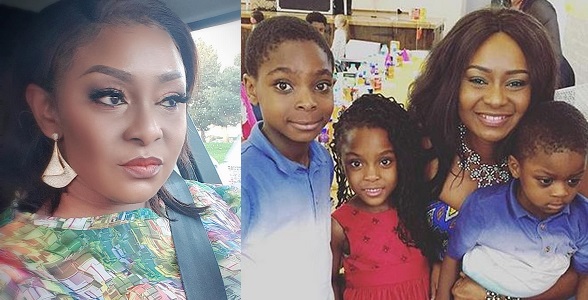 Nigeria-born actress, Victoria Inyama, presently residing in London, United Kingdom, has said she has stopped taking her kids to church and that she has good reason for doing so.

In an Instagram post, the mum-of-three said her decision causes her to deal with guilt but she truly believes it is in her children’s interest to not have their ability to think critically stunted by religious narratives that may cause them to be affected by fear and other emotional triggers.

The movie star who recently became a graduate of University of East London studying Psychology said she was a casualty of church teachings. The teachings, she says, compelled her to endure abuse and violence because she wanted to be upright as she had been taught by pastors.

In all, Victoria says she will teach her kids about God all by herself and will ensure also that they retain their intellectual capacities, something that the church was likely to rob them of.

Thinking Out Loud… .
Dealing with d guilt of not attending church for weeks with my children….
I feel childhood induction is one of d worst aspects of Religion…. I know that d bible is a source of good practices on positive training but I don’t want my children to ever tolerate abuse like I did because of ‘Pastor said’ …..

I basically lived/endured Abuse/violence because ‘pastor said MARRIAGE IS ENDURANCE… PATIENCE IS A VIRTUE …..I grew up attending church consistently like my life depended on it & revrencing d pastor/man of God..

I don’t want anything that will change their intellectual capacity into a series of Emotional triggers based on wanting to belong, approval, judgement & fear.

In Psychology, d illusionary truth effects makes d brain accept narratives it’s been hearing for a long time, e.g, Matt 5v39, I am still in bondage of this verse, makes me look weak when a person offends me & I just let it go……That must end with me, I grew up with that verse & it has been my greatest weakness,

I will teach them about God myself & I will tell them to be kind / respectful but never allow anyone take d meeky….
Have a blessed week ma lovlies