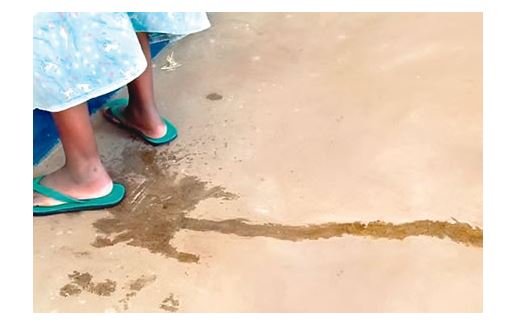 Three women have spoken out about their struggles with Vesico Vaginal Fistula (VVF) and it is very ugly.

Since an uncle forced Eunice Fidelis into early marriage at the age of 12, despondency and sorrow have been her closest companions.

Her life, according to SunNews was made miserable when her so-called husband destroyed her virginity and abandoned her to die on her hospital bed with VVF. The man thereafter got married to another woman.

Eunice, who hails from Kianna Local Government Area of Nasarawa State, has been battling with abnormal fistulous tract, extending between the bladder and the vagina, that allows the continuous involuntary discharge of urine into the vaginal vault.

The poor girl developed the challenge when she became pregnant at a tender age in 2009. She had prolonged labour and was not able to give birth by herself until the child died inside her womb.

Eunice was taken to a private hospital where a surgery was carried out and the dead child was removed. Luckily, she survived the unfortunate situation but she was left with the continuous involuntary urination.

She was discharged and went home, but her husband, who paid her uncle to marry her without her consent, refused to go close to her because of the smell of urine. Eunice was rejected in the community and most people kept away from her. The stigma added more sorrow to her life as only her mother stood by her.

She became a known face in most hospitals in Lafia, Nasarawa State, where she spent huge amounts of money trying to regain her human dignity, all to no avail. She was left in utter hopelessness and helplessness. Her mother moved from one hospital to the other in search of a solution to the problem.

At some point, Eunice wanted to commit suicide because she was totally rejected in the community. She had no friend because everyone ran away from her due to the strong smell.

Some hospitals told her that she had an infection. Eventually, she was directed to the Evangel VVF Centre, a unit of Bingham University Teaching Hospital, Jos, Plateau State, for treatment.

Luckily, her hopes were restored after a free surgery in 2019. She stayed in the hospital for some time until she was certified free from the scourge of VVF. Eunice was rescued and she is back to her normal life. But the stigma lingers.

She spoke to the reporter during the annual reunion of about 450 who had a successful VVF surgery at Evangel VVF Centre, Jos.

Eunice cried as she recalled her challenging moments. She expressed gratitude to the doctors at the Evangel VVF Centre Jos, especially, Dr. Sunday Lengmang, for taking care of her in spite of the stench emanating from her body.

“I have been battling with continuous discharge of urine for 11 years, it started in 2009 after a prolonged labour during childbirth.

My uncle collected money from one of his friends and insisted that I must marry the man. I rejected the proposal, but one day I was kidnapped in the market by some strange persons. I was taken to the house of a man who told me I was his wife.

It was hell. The man forced me into bed and I was a virgin. That was how I got married to the man. I got married to him in 2007 when I was 12 years old. I was subjected into severe pains and I became pregnant for him. When it was time for me to deliver, I couldn’t give birth by myself.

I started having continuous involuntary discharge of urine from my vagina. The man abandoned me on the hospital bed to die and went after another woman. My mother paid the hospital bill.

I started moving from hospital to hospital. We spent more than N100,000 seeking help before I was directed to Evangel VVF Centre, Jos, where specialists conducted a free surgery on me.”

A 45-year-old woman, Hajara Simon, had a similar experience. The woman, from Gombe State, was dying gradually as she suffered from an involuntary discharge of urine.

Hajara recalled that her husband also stopped giving her attention as a result of her condition. It was during one of the free medical programmes of the Evangel VVF Centre in Gombe that she discovered that surgery could treat the condition. She shared:

“I came to Gombe to meet with the doctors and I had no money to transport myself to Jos. The doctors gave me money and I came to meet them at the Evangel VVF Centre in Bingham University Teaching Hospital and they performed the surgery for me free of charge.

“My feeding was also free and they gave me free wrappers. As I speak, I am healed of the urine discharge. I had the problem during prolonged labour 10 years ago and since then I have been battling with it. My husband doesn’t o come close to me again.”

Adama Abdullahi, from Gombe State, is yet another victim that survived the condition. She had been battling with the issue for the past six years.

Her husband also abandoned her for another woman and she was left to die. But help came her way when someone directed her to Evangel VVF Centre, Jos, where surgery was successfully performed on her. She also narrated:

“When I came to Jos, I was told to wait, and after eight days, the surgery was performed. But the child died during the prolonged labour.

The centre took care of me. I appeal to the Federal Government to help women who are suffering from VVF. There are a lot of them in various villages. Some of them are not aware of the surgery here. Some have been abandoned by their relations to die because of the smell.”

Dr. Lengmang, the coordinator of the Evangel VVF Centre, a unit of Bingham University Teaching Hospital, said despite the smell and the hazards involved in the surgery, he has continued to perform the surgeries to save their lives.

He said the event was the 29th annual reunion, where over 450 women who had been saved from VVF are reunited with their families. He stated:

“About 30 years ago, Dr. Stephen, an American urologist, started the programme here and since then the need has increased from year to year. We have seen more patients coming with the VVF or different variants of the female genital fistula.

“This is the condition that affects women that are among the poorest of the poor in society as a result of difficulties or complications of childbirth. And unless surgery is done, these women will continue to be incontinent of urine or faeces for the rest of their lives.

“We treat these women the first time when they come to the VVF Centre, and we treat them with compassion. We do not care about the urine stench on them. We see them as humans, which is far different from what they have experienced from their homes and communities.

“We decide to be calling them once in the year because bringing them for follow-up is even a problem; they do not have the transport money to come. We decided that every second Saturday of March every year, we will invite all the women that we have treated from the past year so that they can come for checkup and have fellowship with friends.”

ALSO SEE: Medical Experts School Women On VVF, How To Avoid And Overcome The Embarrassing Condition

Dr. Lengmang noted that the VVF reunion was a gathering of women who have been treated of the disease in the previous year. He noted that 450 women were treated in 2019 at the VVF Centre, while over 200 were treated during the medical outreach.

“VVF is caused by prolonged obstructed labour in over 90 per cent of cases. That is when a woman gets into labour and the head of the baby cannot pass through the passage and it is restricted by the bones and the sub-tissues.

The baby gets to die and blocks the blood supply in the bladder and the rest of the places, that leads to a hole developing either between the bladder and vagina or the rectum or the vagina.

The people that are mostly predisposed to these are girls that got married before they attained their maturity stage. That is to say, the girls are already fertile and started having menses but their bodies have not yet grown to the level that the bones are well spaced for the child to pass through.

The major primary associated factor is poverty. In over 90 per cent of cases, it is as a result of prolonged labour, and in the rest of the 10 per cent there are several factors that lead to it.

One is the harmful traditional practice, female circumcision or female genital mutilation can easily lead to that, because it is done by barbers who are not trained in the health system. They may just cut the genitals and it goes into the bladder and the rectum.

There is another practice called ‘Yanka gishiri.’ That is cutting of the female genital system and it is predominant in the North West and North East parts of Nigeria.”

Dr. Lengmang said it was wrong for men to abandon their wives at the point of childbirth, noting that children are the pride of every African:

“Husbands should take it upon themselves to take care of their wives. And if they develop this problem, all that they need to do is to provide transport money for them to come to the VVF Centre, where the surgery is provided free of charge.

We have existed for about 30 years now and we have never collected money from any patient except those who can afford it and in a year it could be one or two persons.”