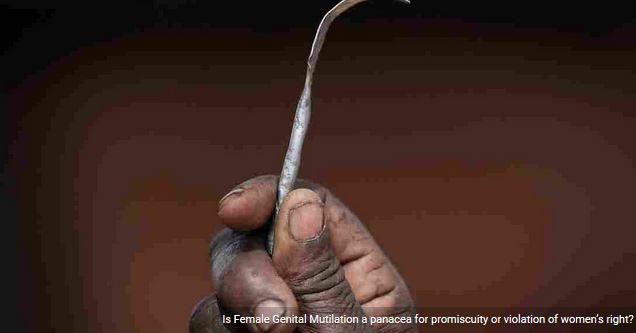 Nigeria ranks third among Female Genital Mutilation (FGM) practicing countries in the world. FGM involves the partial or total removal of the external female genitalia or other injury to the female genital organs for non-medical reasons. It is classified by experts into four major types, namely:

Type 3, also known as infibulation, is the narrowing of the vaginal opening through the creation of a covering seal, where the seal is formed by cutting and repositioning the labia minora, or labia majora, sometimes through stitching, with or without removal of the clitoral prepuce/clitoral hood and glans (Type I FGM).

Type 4 includes all other harmful procedures to the female genitalia for non-medical purposes, e.g. pricking, piercing, incising, scraping and cauterising the genital.

Societies and communities around the globe practice the different types of FGM, claiming it is a panacea for promiscuity and means of protecting women’s chastity.

It is prevalent in about 28 countries in Africa and a few scattered communities globally. But its burden is seen in Nigeria, Egypt, Mali, Eritrea, Sudan, Central African Republic and Northern part of Ghana, where it has been an old traditional and cultural practice.

In Nigeria, the 2018 Nigeria and Demographic Health Survey (NDHS) report shows that the practice is prevalent in the South-South with 77 per cent, followed by South East with 68 per cent, South West with 65 per cent, but practised on a smaller scale in the North.

However, it is recognised internationally as a violation of the right of girls and women, as experts conclude that it is a harmful practice and has no health benefits.

It is, therefore, celebrated annually around the globe on May 23 as World Fistula Day to bring to the fore, the many disadvantages and ills of the practice and how it affects women and girls, as well as proffer solution to remedy the situation.

The theme of the celebration in 2020 is “End Gender Inequality! End Health Inequities! End Fistula now!”.
Dr Juliet Ofor, a medical practitioner with Federal Medical Centre, Jabi, Abuja says ‘the act is a reflection of deep-rooted inequality between the sexes, and constitutes an extreme form of discrimination against women.’

Ofor says it is carried out on minors, making it a violation of the rights of children. Understandably, the practice can be described as a total violation of a person’s right to health, security and physical integrity, the right to be free from torture and inhuman or degrading treatment, and the right to life when the procedure results to death.

The medical practitioner, who emphasised the need for national and international legislation against FGM, says it has no health benefits but harm, noting that deinfibulation, a surgical procedure carried out to re-open the vaginal introitus of women living with type III FGM, is often necessary for improved health and well-being, as well as to allow intercourse or to facilitate childbirth.

”FGM has no health benefits, it harms girls and women in many ways. It involves removing and damaging healthy and normal female genital tissue and interferes with the natural functions of girls’ and women’s bodies.

The risks of FGM increase with increasing severity, which corresponds to the amount of tissue damaged, although all forms of FGM are associated with increased health risk.

It is clear that prevalence rates progressively decline in the young age groups and about 37 per cent of circumcised women do not want it to continue.”

Ofor urges government at all levels to begin massive sensitisation and education on the ills of FGM, noting, however, that “states like Ebonyi, Osun and Imo, where the practice is high, have, however, recorded reduction. She added:

”But there is need for continuous education of the masses on the harmful cultural practice. Many stakeholders have consistently called on health workers to organise programmes on the harmful effects of FGM in rural areas, where it is seen as a cultural right, using local languages and citing examples of the complications.”

Adaku Okadigbo, an Abuja resident who says she is a victim of FGM, describes the practice as a silent killer. She says that the destructive effects of FGM on her are so many to mention ‘and I will never practice it on my children or encourage any of my relatives or friends to do it on their girl children.’

She adds that the practice is just to dehumanise the victims and not a panacea against promiscuity ‘because a promiscuous woman will still do it no matter what you do to her.’

”Others include scar tissue and keloid; sexual problems (pain during intercourse, decreased satisfaction, etc.), increased risk of childbirth complications, the need for later surgeries to seal or narrow the vaginal opening.

The medical expert also identified some of the psychological problems caused by FGM to include depression, anxiety, post-traumatic stress disorder, and low self-esteem, saying such conditions can degrade or dehumanise the victims.

Shehu also calls for males’ support and promotion of the rights of the girl-child as necessary tools toward eradicating the harmful practice.

According to her, the direct Involvement of community and religious leaders in the target population is very important to disabuse the minds of the people.

Mrs Sylvia Oguamanam, a Lecturer at Angel Crown College of Education, Abuja, however, emphasise the need for a change of traditional and cultural ideology in target communities.

Oguamanam, who says there is considerable support for the practice in areas where it is deeply rooted in local tradition and ignorance, notes that traditional rulers must be involved as major stakeholders to achieve the desired change.

Consequently, FGM, as practised in societies and communities “to check promiscuity” among women and girls, cannot be said to achieve the goal, as it causes more harm to victims, while promiscuous women will still do it no matter what, indicating that there is no connection between FGM and promiscuity.