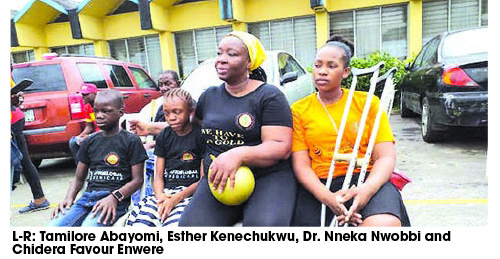 The kids pictured above, Oluwatetisimi Babatunde, Tamilore Abayomi, Esther Kenechukwu, and Chidera Favour Enwere all have something in common. They all suffered childhood cancers.

However, while Babatunde is yet battling for survival in the Paediatric Oncology Ward of Lagos University Teaching Hospital (LUTH), the trio of Abayomi, Kenechukwu and Enwere Babatunde have all survived theirs.

Last Christmas, they took some time off to unwind at a Christmas party organised by the Children Living With Cancer Foundation (CLWCF). The event was said to have received support from Akowonjo, Ajao Lions Clubs and Afriglobal Diagnostics.

Their siblings, parents and relatives and other sick children in the ward also joined them at the party.

Founder of CLWCF, Dr. Nneka Nwobbi, said the gesture was motivated by the fact that some of the sufferers do survive. She said:

“When they survive, there’s a lasting link between us and them. Some of our survivors are in tertiary institutions. One of our benefactors, Mrs. Temi Edu, has taken up payment of tuition fees for Oluchi and Timothy. We pray that she takes on Dera’s education. She had cancer of the bone, was amputated and is now on clutches.”

Comparing the survival rate at the foundation’s inception 16 years ago and now, she said there is an increase from the previous one or two cases out of 10 to three or four out of 10 now.

Nwobbi regretted that, despite the foundation’s consistent enlightenment efforts, many people were still in the dark regarding the prevalence of childhood cancers. She revealed the SULIAN signs in identifying the cancer. She stated:

“For the U, when a child develops unknown conditions, like bleeding in the urine, that child should be examined. Or in the case where a healthy child wakes up early in the morning, vomiting. Such child should be investigated. Sometimes the vomiting could be projectile, meaning, it shoots forward. Perhaps, there could be something in the brain responsible for that problem.

“Then anything strange around the eye could originate from the eye or brain. If there’s a mass in the brain, the mass can actually push out the eye. There’s what we call the cat eye reflex. When these things are noticed, that child should be tested as soon as possible.

“L is to look out for lump anywhere in the body. When observed, it should be investigated. The next one is A –aches and pains, bones and easy fracture. When these signs are noticed, the child should be examined.

“The N is for neurological signs. This has to do with the child’s gait –how a child walks; if depression is observed, a child not being dull and smart as before, has constant headache, that child should be investigated.”

Nwobbi stated that childhood cancer sufferers are catered for not only in LUTH but are also at the Lagos University Teaching Hospital (LASUTH) and in Orthopedic Hospital, Igbobi.

“One of our survivors, Chidera, was amputated at the Orthopaedic Hospital, where they treat cancer of the muscle and bones,” she recalled.

She put the cost of treating cancer in a child at N2 million, adding that this has led many to abandon the hospitals to seek herbal remedy or spiritual help. She noted, though, that such places hardly offer any help. She added:

“Some even take the child to the village to pass on. Recently, during an interview on a national radio, the anchor lady, Wemimo, upon hearing this, took it upon herself to raise N2 million to treat a child. She then created a special account to that effect. And we’ve been having responses. And daily, I send her details of income to that account.”

Nwobbi said that, soon, childhood cancer treatment would begin to record a better cure rate. This, she said, will be made possible though recent completion of the equipping of the new Intensive Care Unit at LUTH, with paediatric equipment by Avi-Cena School.

“In children, sizes of equipment differ according to their ages from babyhood to childhood to the ten years,” she said.

The health expert, who hinted that its priority for 2020 would centre on data collation, listed other partners in the fight against childhood cancers to include Pinefiled Schools. She stated:

“Monthly, they supply potable drinking water to children in the ward. Cellcharis offers appreciable discount on chemotherapy drugs. Afriglobal offers free diagnosis and has been supporting our annual awareness walk.

“Also, we have a wonderful anonymous donor known simply as Kofo. With her donations, we’ve been able to treat a child with brain tumour, though she still needs chemotherapy to clear all tumours.”

Oluwatetisimi’s mother, Mrs. Oluwatosin Babatunde, who was part of the children’s party, said he was diagnosed of a childhood cancer known as B Cell Leukaemia. She described the news of her son’s cancer status as very devastating. She said, however, that CLWCF’s stepping in and footing the bill for treatment brought reprieve.

She then solicited support from all. She said:

“People should come to LUTH, LASUTH and Igbobi Orthopaedic Hospital and see the number of children that are down with cancer. CLWCF needs more support.”