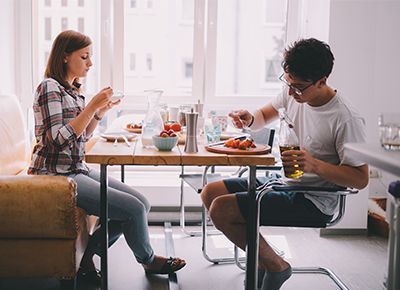 Popular Hairstylist-to-the stars, Jen Atkin on Instagram recently shared a gorgeous photo of her and her husband, photographer Mike Rosenthal, looking perfect at a pal’s wedding and she captioned it:

You may not have thrown your strappy sandals recently, but if you’re anything like Atkin or, oh, gazillions of other married people, you probably relate to the rage.

Below are three all-too-common toxic things to avoid in relationships or marriages, and some suggestions for healthier substitutes.

You know that phrase, “Seeing the world through rose colored glasses”? Yeah. This is the opposite. When your default response is to look for the negative in your partner’s words or actions, to argumentatively dismantle their ideas and suggestions or automatically question their decisions, you’re on the road to toxic territory.

We’ve all been there; criticism is one of the most common marital issues, according to relationship researchers at The Gottman Institute. To clarify, criticism is “different than offering a critique or voicing a complaint,” writes the Institute’s Ellie Lisitsa.

“Complaints center on specific issues, but criticism is an ad hominem attack on your partner’s character.”

You could say, “It bothers me when you check your phone in the middle of our intense discussion.”

But instead, you say, “You never listen to a word I say. You are selfish, oblivious and rude.” See the difference? The first comment registers your partner’s behavior and how it affects you; the second takes down your partner as a whole person, and points to a “consistent and negative personality flaw.”

Avoid using words like “never” or “always.” Complain but don’t blame. A complaint addresses a specific behavior or action and your feelings about it. It also communicates a need: “It would make me feel so much better if you could put your phone down until we’re done with this conversation. Do you mind?” Throwing in a sincere please and thank-you can’t hurt.

Also known as grudge holding, this is really about an unwillingness to forgive and let go. Perhaps you find yourself unable to move past a mistake or a cutting comment your S.O. once made. Or, maybe one of you is choosing to bury a past incident rather than take responsibility and apologize for it.

In any case, the ghost of this issue is likely to haunt your relationship. You may find it lurking beneath the surface during seemingly unrelated, mundane arguments about chores. It’s always ready to rear its hideous head at undesirable moments, like during in-law brunches or on expensive vacations or date nights at impossible-to-get-into restaurants. Side note: This ghost loves nothing more than to burst out after you’ve had a few cocktails.

Try not to let hurts build up or resentments fester. Be open to your partner’s attempts to repair the damage—which may look different for different people. Some of us readily own our mistakes, and are willing to discuss and apologize for them directly.

Others prefer action over words but will still find ways to show they care, that they heard you, and they are trying. If you were the one who made the mess, it’s never too late to get out your emotional Swiffer and clean it up.

Writes relationship coach Kyle Benson: “The difference between happy couples and unhappy couples is not that happy couples don’t make mistakes… They do all the same things unhealthy couples do, but at some point they have a conversation where they recover from it.”

Once we get closure on an unhappy event, we are generally able to heal and move on. This has to do with the way we cognitively process our memories.

Writes Benson: “As the underlying hurt is addressed, the event is [perceived as] completed by the mind and no longer lurks around…waiting to be replayed again and again.” To forgive really is to forget.

3. Saying the meanest thing ever in the heat of the moment

When our fight-or-flight instinct gets triggered during an argument, we tend to get vicious and go for the jugular. The kicker is, we don’t even mean much of the (shudderingly awful) stuff that comes out of our mouths. But once it escapes, we can’t take it back.

Gottman calls this being “emotionally flooded” because it feels like giant waves of feelings are knocking us down and washing away our ability to react like a rational human being. Of course, once the storm is over, our relationships feel like soggy, sloppy disasters.

Take a walk to cool off. Biologically speaking, it takes the average person at least 20 minutes to calm down once they are flooded. If you can, hit pause on the argument and leave the room. But while you’re out, don’t stew, text your friend a blow-by-blow of what just happened, or mentally build your case against your partner. Instead, try to picture them in a positive moment or recall a loving memory.

If you can’t physically walk away, then look inward and acknowledge to yourself that you are becoming flooded and you probably shouldn’t trust the wild, rage-fueled narrative your mind is currently spinning. Remember these feelings are temporary.

SEE ALSO: Can You Cope With A Partner Who Don’t Get Along With Your Parents? Some Married Nigerians Share Their Opinions | Read

Writes therapist Stephanie Manes: “Picture your racing thoughts as a cloud of sand that has been kicked up in the water. Wait for the sand to sink back down to the seabed, leaving clear water. As your frantic thoughts subside, your nervous system can calm down, too.”

The idea behind walking away is not to shut out or abandon your partner, but to self-soothe until you get to a point where you can productively and even lovingly talk to them.