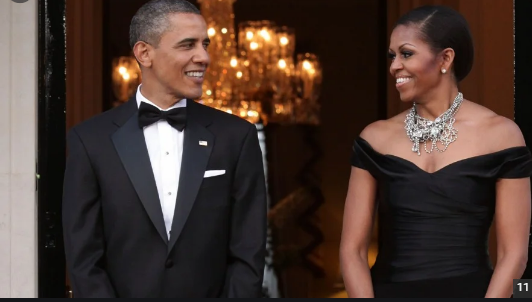 Barack Obama says that the stress involved in his job as the President of the United States caused issues with wife Michelle. In his new 768 page memoir A Promised Land, he reveals how being the leader of the US took a toll on his now 28-year marriage to wife Michelle, 56.

The dad-of-two said that behind the scenes, friends and even family treated her as “secondary” in importance to him. Obama writes that once they were in the White House as America’s first family along with daughters Malia, now 22, and Sasha, now 19,

“I continued to sense an undercurrent of tension in her, subtle but constant, like the faint thrum of a hidden machine.”

READ ALSO: Michelle Obama Reflects On The Lessons From Her Marriage Of 28 Years To Barack

Not only had Michelle’s duties amplified as the first lady, but she was also the subject of “scrutiny and attacks.”

“It was as if, confined as we were within the walls of the White House, all her previous sources of frustration became more concentrated, more vivid, whether it was my round the clock absorption with work, or the way politics exposed our family to scrutiny and attacks, or the tendency of even friends and family members to treat her role as secondary in importance,”

He said that caused him to lay awake at night next to Michelle, thinking of life before his presidency,

“when everything between us felt lighter, when her smile was more constant and our love less encumbered, and my heart would suddenly tighten at the thought that those days might not return.”