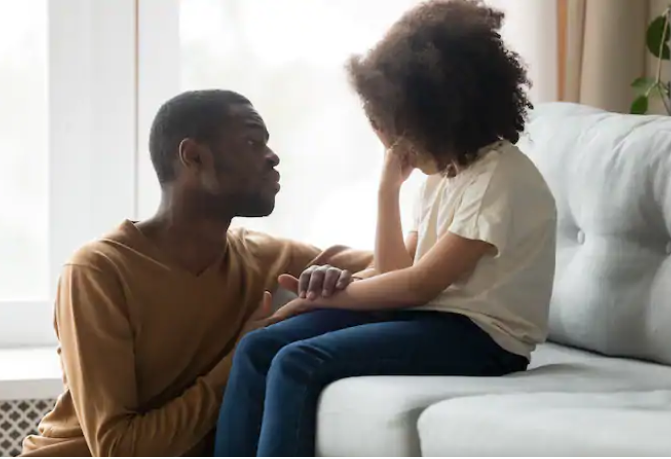 All children experience negative and positive emotions in reaction to life’s challenges and restrictions but in this part of the world especially, most parents don’t allow their kids express negative emotions.

According to Early childhood and positive parent educator, Glory Ubah Negative emotions are a natural and important part of child development.

They assist children in making necessary adjustments in their expectations to help them accept life’s limits.

Positive parenting skills, such as listening with empathy, provide opportunities for children to learn appropriate ways to express their negative emotions.

Giving children permission to feel with the positive message that, ‘it is okay to express negative emotions,’ empowers them. It awakens and strengthens willpower and gives a sense of direction.

“Encouraging the expression of feelings is healthy. It helps eliminate guilt and promotes honesty. All the skills of living that make a person shine in this world and achieve great success and fulfillment come from staying in touch with feelings and being able to let go of negative feelings.

Successful people fully feel their losses, but they bounce back because they have the ability to let go of negative feelings. They are able to manage their negative feelings without having to suppress them or get lost in them.”

Ubah who is also the founder, Early Learners Place, an online community sharing practical and actionable parenting tips, said children should be given permission to feel the way they do.

“Don’t manipulate your child’s feelings by saying, ‘Why are you so grumpy? Smile for Mommy, It can’t be as bad as all that, Why do you have to make such a fuss?’ ‘That’s enough already’ and all the other phrases we are used to saying.

“We should note that there are people who have undergone therapy because they were not allowed to express what they felt as children. When a child falls down and cries, you contradict his feelings by saying, ‘you are not hurt. You are okay,’ he learns to distrust his feelings because he hurts, but is told he’s all right by the person he trusts. He is also given the message that it’s not acceptable to be unhappy.

“Our children look to us as guideposts for their feelings, they are sensitive to our reactions. We should always respect their feelings. If the child’s action is undesirable, for example, your angry child wants to kick you, so what do you do? Acknowledge his feelings by saying, ‘You seem angry.’ Set limits with the expression, ‘I won’t let you kick me,’ Give him the opportunity to figure out what to do – What else can you do?”

Ubah added that allowing a child express his/her feelings, positive and negative, is a healthy way to prepare him for life.

“If you accept your child’s feelings, you will help him accept them. We grown-ups seem to be really comfortable telling children who are not okay that they are actually just fine. That might be because we are ill equipped to handle unhappy feelings and fears.

We also may not realise that telling a child (or anyone) to stop feeling their feelings is unhealthy.

In the words of Sigmund Freud a psychologist, ‘Unexpressed emotions will never die. They are buried alive and will come forth later in uglier ways.