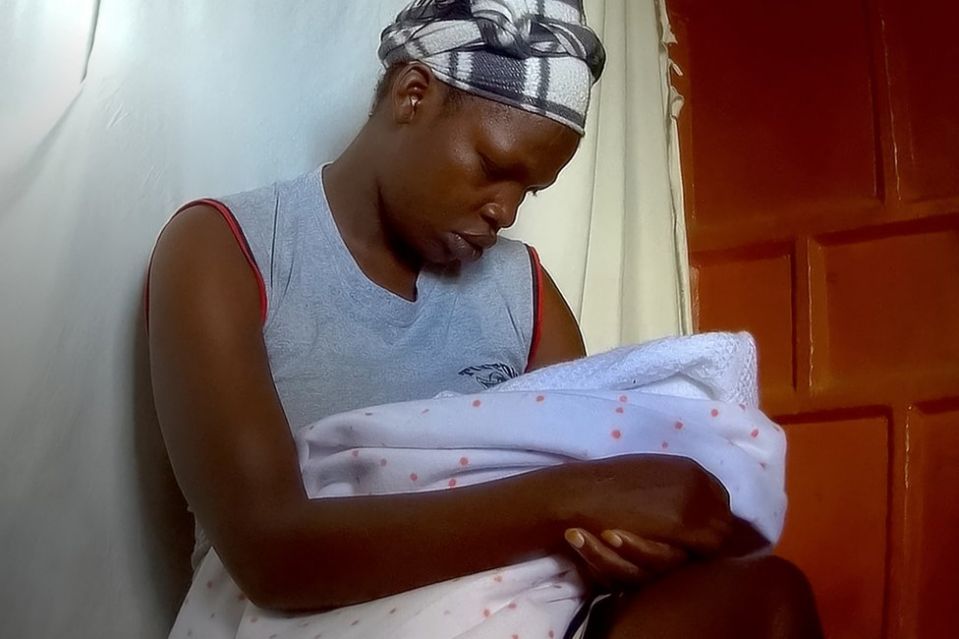 Experts Share Dangerous Side-Effects Of Chewing, Crushing Or Breaking Drugs Before Taking Them

Many women will know the anxiety of preparing to bring a child into the world without enough money to feed one person, let alone two. Most will never contemplate selling a child to a stranger. But for some expectant mothers in poverty in Kenya, selling a baby to traffickers has become the last in a limited number of options for survival.

Last month, BBC Africa Eye exposed a thriving black-market trade in babies in the Kenyan capital, Nairobi. Police arrested seven people on trafficking charges in response to the story, but what about the women on the other side of these illegal deals? What drives a mother to sell her child?

The story of the young woman pictured above is a very sad one. Adama’s life was easy when she had her parents, she said. Money was tight, and her options were already narrow, but there was an order to things that made sense.

She attended school and cherished it. She had few worries. Then her father died when she was 12, and her mother died a few years later. Adama said, in a conversation from her village in rural western Kenya:

“Life became so hard then. I had to drop out of school and fend for myself.”

At 22, Adama met a man and got pregnant, but he died three days after their baby daughter was born. Her loneliness deepened. She nursed her baby through an infant sickness until the girl improved, at about 18 months, then a steady income was needed to keep them both alive. So Adama left the baby with her elderly grandmother and headed to Nairobi to find work.

“Bear in mind you are going to get a living for your child,” her grandmother said.

Adama arrived in Nairobi and began by selling watermelon on the street, but it didn’t pay enough and her housemate stole any money she left at home. Life in the city was hard too: she has a scar at the top of her forehead, just under her cropped hair, from defending herself.

“Some men were playing with me and it reached a point I had to fight back,” she said.

She moved on to work on a construction site, where she wasn’t paid at all, and from there to a nightclub, where she instructed her boss to send her pay directly back to her grandma in the village. After a while, Adama took a little more of her pay in Nairobi so she could rent a place to live.

She found a new job with slightly better wages at another construction site, and met a man there. The two dated for a while and he told her he wanted to have a child.

Adama offered him a deal — if she could bring her baby girl to live with them, they could have a child together. He agreed, and for five months of Adama’s pregnancy he paid the rent and bills and bought food for their home, and Adama waited for the right time to bring her baby girl into the city. Then he left one day and never came back.

Sarah was 17 when she fell pregnant with her second child, with no means to support the baby, she said. She sold him to a woman who offered her 3,000 Kenyan shillings – about £20. She said:

“At that point I was young, I never thought what I was doing was wrong. After five years it hit me, and I wanted to refund her the money.”

She said she knew other women who had sold babies for similar sums.

“Many girls sell their babies due to challenges. Maybe she has been chased from home by her mum and she has nothing, or she was still in school when she got pregnant.

That is too many problems for a girl who is 15 or 16. You will find girls losing their baby and everything they own because there is no one to hold their hand.”

Kenya has one of the highest rates of teenage pregnancy in Africa, and health experts say the problem has worsened during the coronavirus pandemic, with some women pushed into sex work to survive and girls losing the structure of the school system.

“I’ve heard so many stories of women and girls in this situation. Young women are coming into cities looking for jobs, getting into relationships, conceiving, and being abandoned by the father of their child,”

“If the father will not pay, then these women and girls have to find other ways to substitute for that income. And that is what drives them to these baby sellers, so that they can get some form of income to support themselves and perhaps children they already have back home. People don’t speak about this in the open, but it is there.”

Adama hid her pregnancy for as long as she could at the construction site, until she could no longer carry heavy bags of cement or disguise her bump. Then she had no income to cover her rent. For three months, her landlord gave her grace, then he kicked her out and boarded the place up.

At eight months pregnant, Adama began breaking back into the house late at night just to sleep and leaving first thing in the morning.

“On a good day I would be lucky to get food,” she said. “Sometimes I would just drink water, pray, and sleep.”

When a woman finds herself in Adama’s position in Kenya, several factors can converge to push them into the hands of traffickers.

Abortion is illegal unless the life of the mother or the child is at risk, leaving only dangerous unlicensed alternatives on the table. There is also a significant lack of sex and reproductive health education for adolescents, particularly in rural areas, as well as a lack of awareness around legal adoption processes.

“Women and girls with unwanted pregnancies do not have support from the government,” said Ibrahim Ali, Kenya programme manager for the charity Health Poverty Action.

“These women have often been victimised and stigmatised, especially in rural areas, and they tend to run away, and that puts them in vulnerable situations in cities.”

Adama had no idea what legal options would be open to her to give up her child safely, and no understanding of the adoption process.

“I was so stressed, I started thinking how I would commit suicide by drowning myself, so people could just forget about me.”

But a few weeks before her due date, someone introduced Adama to a well-dressed woman named Mary Auma, who told her not to have an abortion or end her life.

SEE ALSO: ‘Why I gave birth and dumped my baby’ – Mum-of-5, Dupe Alabi Confesses To BBC

Mary Auma runs an illegal street clinic in the Nairobi slum Kayole. She gave Adama 100 shillings and told her to come to the clinic the following day.

Mary Auma’s makeshift clinic is not really a clinic, it’s two rooms hidden behind an inconspicuous shopfront on a Kayole street.

Inside there are a few mostly empty shelves scattered with old medicinal products, behind which are the rooms for women to give birth. Auma sits inside with her assistant, buying and selling babies for a profit, without the inconvenience of having to check who is buying them or what for.

She told Adama that her buyers were loving parents unable to conceive, who would provide for a much-wanted child. But in reality Auma will sell a baby to someone who walks in off the street with the right amount of cash.

Auma also tells expectant mothers that she is a former nurse, but she does not have the medical equipment, skills, or sanitation to deal with a serious problem during childbirth. Adama recalled:

“Her place was dirty, she would use a small container for blood, she had no basin, and the bed was not clean. But I was desperate, I didn’t have a choice.”

When Adama arrived at the clinic, Auma gave her two tablets without warning, to induce labour, Adama said. Auma had a buyer lined up and she was anxious to make a sale. But when Adama gave birth, the baby boy developed chest problems and needed urgent care, and Auma told Adama to take him to hospital.

After a week in hospital, Adama was discharged with a healthy boy. The landlord that had kicked her out when she was pregnant allowed her to return and she nursed the baby. Shortly after she ran into Auma again at the market, she said, and Auma gave her another 100 shillings and told her to come to the clinic the next day.

Auma wasn’t offering Adama the 45,000 shillings — £300 — she was quoting the buyer. She offered Adama 10,000 — about £70. But Auma didn’t know the buyer she had lined up was an undercover reporter working for the the BBC, as part of a year-long investigation into child trafficking.

When Adama went to the makeshift clinic the next day, she sat in the backroom, cradling her baby son in her arms. In a whispered discussion, the supposed buyer told her she had other options, and Adama had a change of heart.

She left the clinic that day holding her son, and took him to a government-run children’s home, where he will be cared for until a legitimate adoption can be arranged.

The BBC asked Auma to respond to the allegations in this story, but she declined. Adama is 29 now, and living again in the village where she was raised.

SEE ALSO: “I married my husband after he died” – BBC Documentary Gives Insight On A Long-Standing Tradition Among The Igbo People | WATCH

She still goes to bed hungry sometimes. Life is still hard. She gets occasional work at a small hotel nearby but not enough. She struggles not to drink. She dreams of opening her own shoe shop in the village and bringing in shoes from Nairobi, but it is a distant dream. She has no contact with her son, but she has no regrets. She said:

“I was not happy selling my child, I did not even want to touch that money. When there was no money involved in giving him up, then I was OK.”

She knows the neighbourhood around the children’s home where she left her son. It is near the house she was kicked out of when she was almost ready to give birth to him.

“I know the area is safe,” she said, “and the people looking after him are good.”