Fracture of the clavicle or collarbone is the most common fracture during labor and delivery. The clavicle may break when there is trouble delivering the baby’s shoulder or during a breech delivery. A baby with a fractured clavicle rarely moves the arm on the side of the break.

A mom, Mrs. BT brought her 12-day-old baby to the hospital on Christmas day. She had noticed a swelling on the infant’s right arm which she described as painful. She could not really say the day when the bump first appeared.

The grandma who accompanied the mother and the baby to the hospital said she noticed the swelling a few days ago and that she had massaged it with methylsalycillate balm and the swelling had reduced.

The mother was reassured that all would be well and explained that she needed to do an X-ray of the chest to show the extent of possible clavicle fracture.

Unfortunately, she could not get a place to do the X-ray on Christmas Day but was done the next day. The X-ray shows swelling on the clavicle which is consistent with features of a fractured clavicle. 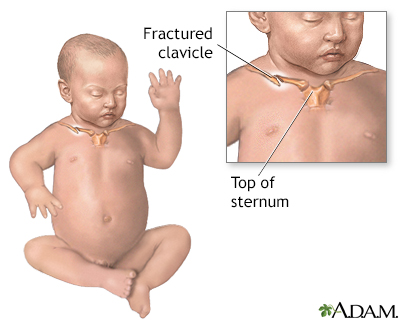 The clavicle is easily fractured in adults and children because of its subcutaneous, relatively anterior location and frequent exposure to transmitted forces. The midshaft is the thinnest, least medullous area of the clavicle, and thus the most easily fractured. The lack of muscular and ligamentous support also makes it vulnerable to injury.

A fractured clavicle in a baby that has just been delivered is a broken collar bone. Babies can easily fracture their clavicle as they pass through the birth canal during delivery. But the clavicle may be broken in newborns even after birth.

In some cases, it is so mild that it is not diagnosed until the fracture begins to heal and a bump in the bone (callus) is noticed at the collarbone. In a newborn, a broken clavicle almost always heals with no problems.

A fractured clavicle in a newborn can often be difficult to diagnose because it is often asymptomatic and can also be confused with other common diagnoses such as brachial plexus palsy, congenital pseudoarthrosis, and congenital muscular torticollis. The clavicle is the most frequently injured bone during labor and delivery and accounts for approximately 90% of all obstetrical fractures.

The diagnosis is often made when the newborn’s parents note a lack of active, spontaneous movement of the affected upper arm. In addition, newborns with acute clavicular fractures frequently have an asymmetric reflex of both hands and may also have localized swelling.

However, it is common for the diagnosis to be suspected only after swelling or mass called callus is noted over the affected clavicle.

Pain, particularly with upper extremity movement or on the front part of the upper chest. Often, after the swelling has subsided, the fracture can be felt through the skin. Newborns usually have visible and palpable callus formation only 7-10 days after the clavicle fracture. Neonatal clavicle fractures generally heal rapidly and have an overall excellent prognosis.

A chest X-ray will show whether or not there is a broken bone.

Generally, there is no treatment other than lifting the child gently to prevent discomfort. Occasionally, the arm on the affected side may be immobilised, most often by simply pinning the sleeve to the clothes.

The infant’s arm is put in a sling or the sleeve is pinned to his or her shirt for seven to 10 days.

After the bone has healed, a bump may remain on the clavicle over the area of the break. This bump will slowly go away over the next year or so.

READ ALSO: See Important Information On Why Kissing Newborns Can Be Fatal For Them – Dr. Agatha

Pain relievers are normally prescribed. Caregivers are encouraged to follow doctors’ instructions for administering this medication to newborns. Full recovery is possible even without manipulations.

There are usually no complications because infants’ bones heal well. However, some healthcare providers may ask questions about how the child was injured. Increasing pain (infants often indicate pain with crying that cannot be soothed), if a bump has still not formed over the fracture 14 days after, may suggest a non-union and the baby will need to be re-assessed by an Orthopaedic surgeon.

In conclusion, are you nursing a baby? Have you noticed anything unusual on any part of your baby’s body? Talk to a doctor today.