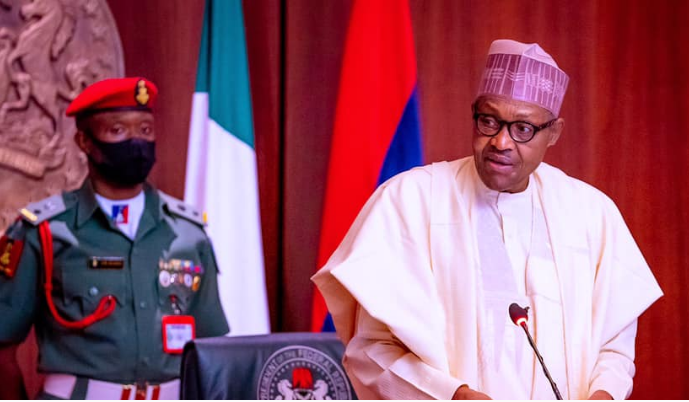 The NSA who disclosed that the President also approved a ban on mining activities in Zamfara over rising insecurity in the state, said all non-state actors had been placed under surveillance.

According to the report by Daily Trust, Monguno reiterated that the federal government would not hesitate to use kinetic means to restore normalcy in the country, while also disclosing that defense and intelligence organisations had been charged not to allow the country slide into anarchy. In his words:

“We can no longer avoid to lose lives while operating within the legalities. We are not going to blackmailed . The government has the responsibility to assert its will.

“Citizens can reside wherever they want to reside . Anybody who is a criminal should be brought to book. The president has also warned against ethnic profiling. We have have enough of chaos .

“Any individual that thinks he can cause disunity, should have a rethink.”

Briefing newsmen at the state Government House in Gusau, Governor Bello Matawalle of Zamfara State said boarding schools would remain closed till the security situation in the state improves. The governor said:

“We have no alternative but to close down all boarding schools so as to douse the fear being entertained by parents and guardians due to the recent abduction of the schoolgirls in Jangebe.

“We are, however, doing everything possible to rescue the children and reunite them with their families.”

Also, the Kano State Government said in order to avert the Zamfara experience, it was shutting down 10 boarding schools located on the outskirts of the city.

READ ALSO: Insecurity: Army Confirms Over 300 Schoolboys Were Abducted From Their Hostel By Terrorists In Katsina

The commissioner said the closure of the schools was with immediate effect and advised parents to rush to the school premises to evacuate their children.

The girls were later released two days later and united with their families.