Music star, Simisola Ogunleye Kosoko, professionally known as Simi has once again lamented the ill-treatment given to women in the music industry, saying female artistes hardly get away with things as their male counterparts do.

The 32-year-old mom-of-one recounted her ordeals as a female musician in a string of posts via her Twitter page on Friday.

The songstress said the challenges her likes grapple with have forced her to consistently align with succeeding female musicians. She wrote:

“Tbh some of the things I’ve experienced – specifically as a woman – in this industry. Lol. They will try to pit you against other women. Try to redefine ur value. Try to get in your head and remodel your self esteem. And I have even had it easier than many.

“Ati executive oh. Ati audience oh. It comes from all the sides. That’s why I fuck with any woman that is winning in this industry – because hurdle is much dear. Women can hardly get away with the kinds of things many men in the same industry get away with on a regular.”

She added that when a woman in the industry stands up for herself, she’s called “difficult”. She continues:

“For every woman that is making it, there are tons of women that have been broken. If u stand up for urself, “she’s difficult”. If you’re not a pushover, “she’s proud”.

The mother of one also charged female singers to be careful about whose opinion they allow to count.

”If you take time for yourself, “she’s lazy.” If you ask for what you deserve, “she’s greedy”. Well, fuck you then.

Have you ever settled down to think that a woman that might seem difficult because she’s the only one on her side, so she has to play all these roles? Fighting family, fighting industry, fighting stereotypes!

And if you’re here to say ‘men also go through it’. It’s true. Nobody is dragging suffering with you. I know some men have it hard, but I ain’t never seen a mediocre female artist make it! etc

Ladies trying to get ahead in this industry, be careful the f**ks you give, because many don’t care about you as much as they care about using you. Protect yourself. When it’s you vs the industry, put urself first.

Make sure your material is great and don’t ever stop standing up for yourself!” 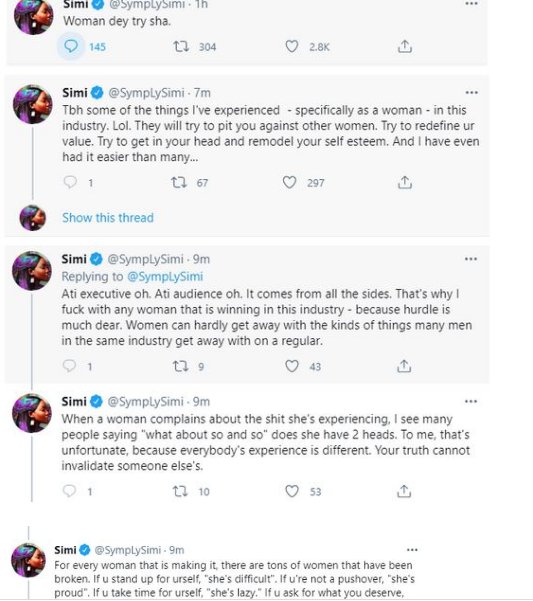