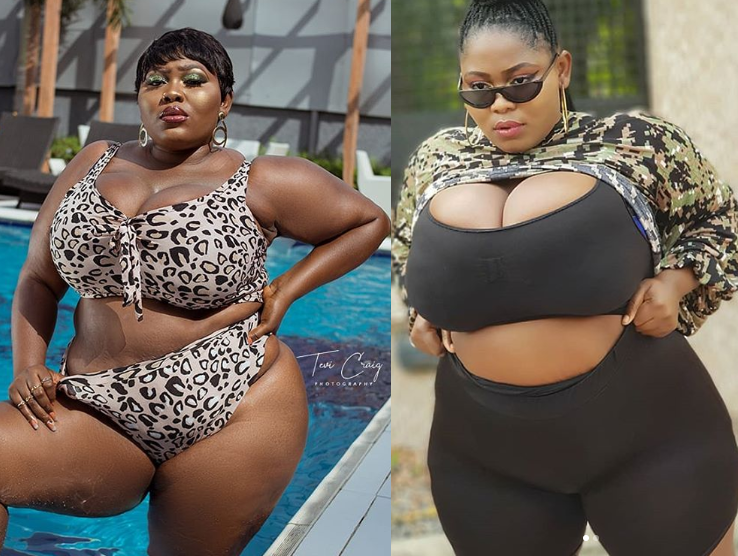 Plus-size model and style influencer, Monalisa Stephen, has declared that no child will ever suck her breasts.

The model emphasised this in an interview with Saturday Sun when asked her if she hasn’t changed her mind about jealously guarding her breasts to the extent of not having her own biological children that will feed on them.

Monalisa, during the chat reiterated that it was a personal decision she took while a teenager:

“Yes, I am still standing on my decision not to have my own kids. It was a decision I took when I was 16. I will rather go for adoption than have my own children.

In fact, I may dedicate my life work to catering to kids around the world. I hope my future husband will understand and respect my decision.”

The role interpreter, who is now into body positivity campaign, also confessed that at some point she was tempted to have surgery to enhance her look. She said:

“I used to feel quite insecure about my backside. I would ask my late mum why my sisters got the best butt shape except me. So, I concluded that having a flat butt was my punishment. It really used to get to me a lot.

Some days, I used to wear butt pads for support. In fact, sometime ago, I almost paid for a liposuction. I asked myself if I will be truly happy after the surgery and deep down the answer was ‘no’. So, at the end of the day, it didn’t really matter.

Now, I don’t care. I am not against liposuction; you’re free to change what you don’t like about your body. Just make sure you’re doing it for you and not anyone. Life’s short. Be happy and love yourself first.”

Asked how she reacts to negative comments from fans about her lifestyle, the plus sized model says,

“I’m my own inspiration, my journey to self love. I feel negative people are going through a lot. They need love. So now, whenever a troll comes for me, I will just ignore or send them a love message; that always shuts them off.”

In November last year, the 29-year-old had granted an interview to Punch where she said that she was not interested in getting married or having children.

“I am not against marriage but I don’t want to be married or have my own children. I would rather adopt children. I am not the ‘marriage’ type. I don’t think marriage is the main purpose why we are on earth.

I don’t also like the Nigerian mentality where people think that at a certain age, one has to be married. Marriage is not a do-or-die affair,”