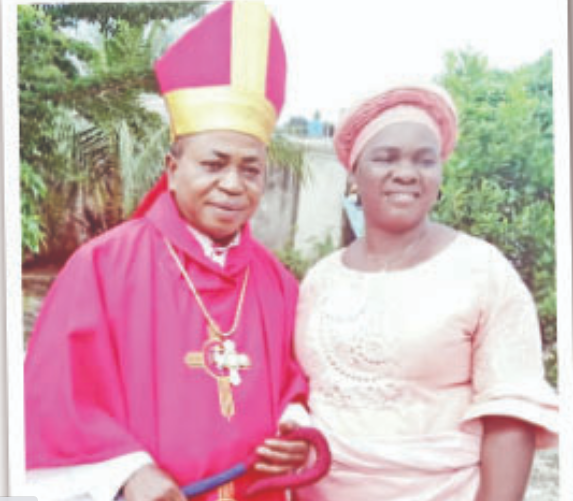 Inspiring Testimony! Fitness Expert, Bunmi George Narrates How Her Marriage Was Tested When Her Husband Lost His Job 9 Days After Their Second Child Was Born

Marriage is a beautiful experience but if care is not taken, a misunderstanding can put asunder what God has joined together. That is the summary of the story of Rev. Dr. Lawson Elom, the Methodist Bishop of Abakaliki Diocese and his dear wife, Mrs. Nneoma Josephine Elom from Ngbo in Ohaukwu Local Government Area of Ebonyi State.

But thankfully, the couple who has been married for over 25 years, usually takes great care to ensure that whatever misunderstanding there is, doesn’t last longer than necessary.

The duo both spoke to DailySun about the secret of their happy, enduring marriage in spite of the abject poverty that nearly ruined their union in the early part of the relationship.

Lawson: By the grace of God, it’s been over 25 years now since I married my dear wife, Josephine Ngozi Elom. I may not tell you everything about how we started. But as a young catechist, I was posted to their village. And when I got the inspiration to get married, I spoke to her about it and she accepted.

That was just the summary of the whole thing. As a catechist, I was poor. I farmed to augment my income. She was among the youths of the church, and each time they came to my house they would enjoy my little food. So the poverty of my house was known to all of them, including her. No table. No stool. No chair. There was nothing to show that this man has enough to marry but she accepted me all the same.

Josephine: I met him in church as a catechist. As one of the church workers, we met almost every week in the course of church activities. But at that time, the issue of marriage was not there.

Did you experience any opposition to your marriage, any objection?

Lawson: Yes, there was strong opposition because men of God were not known to be rich. If someone was poor at that time, people would say he was as poor as a church rat. They opposed her marrying me for the singular reason that I was poor. They said I might not be able to take care of her.

They made serious efforts to discourage my wife from marrying me. But she insisted that she would marry me and so we did marry. That time, I was so poor that I was unable to buy her ordinary panties before the marriage. It got to a point where she almost backed out of the marriage.

Thank God for one Rev. Peter Elom who eventually intervened and told her to accept this marriage as it had started. And, of course, like in every little beginning, we started with nothing. Things were very hard. But the joy of the whole matter is that no matter how bad our food was then, we still enjoyed it and lived in peace.

People used to ask us what we were eating that made us look so well. It is the joy of the heart that kept us till today. And, here we are, from a catechist to the position of a Reverend, an ordained priest, and by God’s providence, I am now a Bishop. We thank God for everything.

Josephine: My family did not support me to marry her. They were asking me: how would you cope with this person, an ordinary pastor? How would he be able to take care of you and your children? They said they would not come to my help if I began to suffer after the marriage.

But I told them that it was the will of God that I marry him, and that He would not allow us to suffer. And, by God’s grace, we got married. It was not easy initially but today I can boast that God is with us. We are like the stone the builders rejected but which has become the pillar of the house. Before, our people didn’t talk to us. But now they don’t do anything without calling on us. It is the work of God; it is by His grace and not by our power.

SEE ALSO: Settling Quarrels On Time: The Dadas Share Rare Insights From Their 26 Years In Marriage

What made you go for your spouse out of many potential men and women that were available for marriage then?

Lawson: I had an inspiration. And when you have an inspiration or when the Lord speaks to you consistently and clearly, you will know. There were many girls but I chose her because I knew her background. Her mother died too early and the woman that took care of her and brought her up was a woman of good virtue known for her love for Christ.

That was the woman I knew to be her mother until I started going for marriage. So, having stayed with them, I saw Christianity being practised by them. I had confidence in the woman that trained her. The Holy Spirit spoke to me that she was my wife and I accepted.

Josephine: I accepted him in place of other suitors because he was a good man. Very gentle and, above all, he is a lover of God.

Lawson: I invited her to my house and told her that I had watched her during church activities and that she would be a good partner for a minister of the gospel. She didn’t accept that day, as usual, you know women and their ways (laughs). She said she was going to pray about it. And when she was done with her prayers, she accepted. That was how the journey started.

How did you react to his proposal?

Josephine: When he proposed, I told him that I would like to seek the face of God. And, actually, God helped me. When I was praying, I told God that if he was truly my husband that I needed a sign. I told Him that within that week I would like to see him come to visit me. But if he is not, let me not set my eyes on him that week.

I fasted and prayed for three days on this issue. Immediately, I concluded the prayer, the following day he came visiting from his school. I asked him why he came. He said he was on his way to the market to buy things for the students because he was one of the prefects in their school then but decided to call in to know how I was faring.

That was how it started. I went back to prayer and told God that He had really shown me a sign. I said He has shown me that it was His will to marry him. That was how I accepted the proposal.

Lawson: It was held at Wesley Methodist Church Ezzangbo by Bishop Okenwa. That was how and where the journey started.

Josephine: It was at Ezzangbo. At that time, cars were a big luxury reserved only for the rich. So that day, there was no vehicle to convey us to the church. He trekked to the church and his people followed behind him. On my own, I waited along the road until one wagon car that was passing by came and carried me to the church.

What is your husband’s favourite food?

Josephine: He likes pounded yam with dried okra and roasted chicken .That is his favourite food. He does not like chewing food; he prefers ‘swallow’.

What is your advice for bachelors and spinsters intending to go into marriage?

ALSO SEE: Some Simple Rituals That Help In Building A Healthy, Lasting Marriage According To Family Coach, Elizabeth Badejo

Josephine: My advice to them is that they should study each other very well before going into marriage. They should also seek the face of God. They should be able to know and understand each other’s likes and dislikes. I must advise women to love and respect their husbands.

A woman is expected to get her husband’s food ready before he comes back.

They should also put their family far from their homes.

They should not allow their parents to come and be deciding for them in the family. That is what destroys homes.

I also want to advise women not to make demands before sleeping with their husbands after marriage. It is not proper. You are a wife and not a prostitute. As a woman, your body is for your husband.

How often do you misunderstand each other and, how do you usually resolve it?

Josephine: I submit totally to my husband. I also endure. Endurance is very important in marriage. And I don’t take offence quickly. I beg him for forgiveness any time I am wrong and that’s the end of the matter. We don’t allow misunderstanding to last into another day. We always settle it. So, that is how we have been able to live happily all these years.