A UK-based writer and author who focuses on children has spoken on her choice of not having a child, saying she is lucky to be childless.

Icona, in a lengthy Twitter thread, stated that being childless is her personal choice as she noted that writing children’s books is not the same as wanting a child. According to her, the women of the past had limited rights and options, and are forced to be homemakers against their will.

The children’s book writer further explained that being childless helps her to devote her entire life to books. To further backup her points, she gave a long list of childless authors who are her role models.

Hinting at what helped her take the decision of not wanting a child, Icona named the women in history who were forced to become homemakers, and died delivering children.

She further revealed that her knowledge of feminist revolution and contraceptives helped her to achieve her desire to remain childless.

READ ALSO: Why “It Is Extremely Ignorant To Expect All Women To Eventually Be Mothers.” – Nse Ikpe-Etim On Motherhood Being A Choice

“Thinking about how lucky I am to be childfree by choice, to do minimal housework for myself only, and to devote my entire life to books. The women of the past who had limited rights and options and were forced to become homemakers against their will had no such privilege.

I’m haunted by the thought of all the women in history who were forced to become homemakers, and died delivering children they never wanted. The Enlightenment, the feminist revolution, and contraceptives saved me from that terrible fate. I will never, ever take it for granted.

By the way, the fact that I’m a children’s writer and I don’t have children is not a new revolutionary concept.

See below, and also look up the lives of many more childless authors such as Maurice Sendak, T. H. White, Beatrix Potter, Lewis Carroll, and J. M. Barrie.

Now that I look at this list I notice that almost every single role model I had as a child was a childless author. I always wanted to be a writer like them, so it’s no wonder that I settled so easily into my bookish, childfree adult life and never doubted my choices.”

When a curious tweep said it sounds funny that she writes for children and about children but still considers them a terrible fate, Icona cleared herself by saying that writing for children is different from wanting to have children. She wrote:

“For those of you who think writing children’s books is the same as wanting children, please check out the lives of Louisa May Alcott, Edward Gorey, Tove Jansson, Hans Christian Andersen, and Dr Seuss, who famously said, “You’ll have kids, I’ll entertain them!” 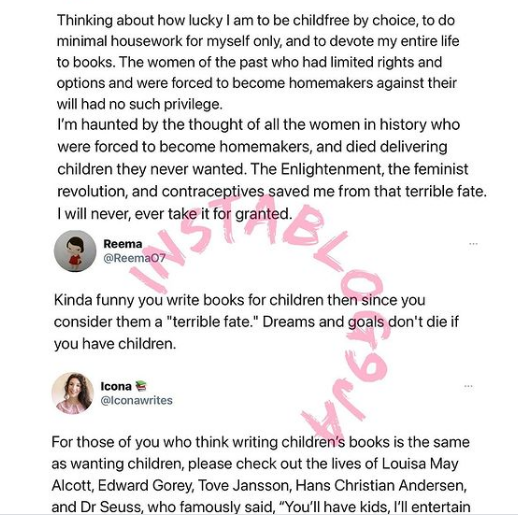