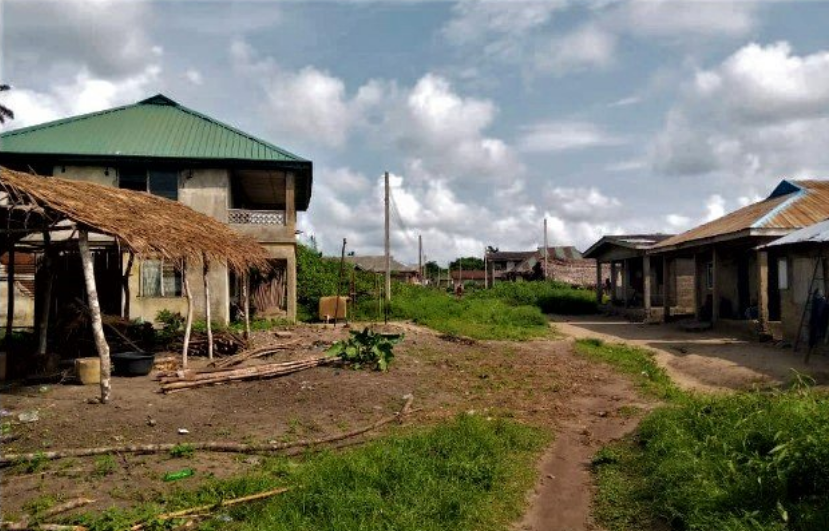 Oriba is a community located in Epe Local Government Area of Lagos State. Residents of this community are facing a tough time with the complete absence of basic health facilities.

PUNCH reports how residents of this off-grid community across the river are surviving with a century-old abandoned health centre.

Journeying through the waters from Itokin to Oriba can be a perilous trip, especially for first-time visitors. It usually takes a couple of men to push a canoe off the shoreline to the deep river to launch a 45-minute ride to the community.

Beside the river is the Flight 086 Memorial Arcade that the Lagos State Government built in 1996, in memory of the victims of the ill-fated ADC aircraft Boeing 727-231.

When reporters paid a visit to the community, the stark realities of a locality without a health facility was witnessed right from the beginning of the journey.

Inside the canoe boarded by PUNCH correspondent was a shrouded corpse, accompanied by family members on their way to Oriba. The corpse was a male identified as Shamsudeen Yinusa.

The corpse was their brother who had died early that morning, after being rushed in a canoe from Oriba to Agbowa General Hospital, Agbowa, Lagos.

According to the family members, Yinusa started vomiting in the night, and because Oriba has no doctor or nurse or a functional health centre, he was rushed to Agbowa but eventually died.

These communities, reeling under deprivation, poverty and hunger, only have their fishing and farming enterprise to cling on to.

Aside from a public primary and secondary school, they are disconnected from basic life amenities such as potable water, electricity and a functional primary health centre.

The late Yinusa, in his 50s, happens to be one of the victims of the non-existence healthcare infrastructure in Oriba.

On June 13, 2021, Yinusa had retired to his house around 11 pm, after spending some time with his friends. He had hoped he would hand over the canoe he was constructing to his customer the next day when he suddenly fell ill.

He had rolled from his bed to the floor while gasping for breath. His family members and neighbours rallied around to save him but they could do nothing in the absence of a public health facility.

They had all stayed awake until 5 am the next day before they sailed him with a canoe to Agbowa General Hospital.

It takes over an hour to travel from Oriba to Agbowa. Yinusa died that evening. His relative, Owode Akeem, said:

“He was not sick; he was working on a canoe that day before he came back and was chatting with us before he went to sleep.

“But when his room partner went home around 3 am, he found hm on the floor and he had vomited on the floor.

“That was when he screamed and alerted us. We did our best to revive him but nothing more could be done.

“If there had been a hospital here, he wouldn’t have died. We would have taken him to the hospital.

“It was not until yesterday morning around 5 am that we took him to Agbowa General Hospital but unfortunately, he died.”

Yinusa’s tragic death is an insight into how residents of Oriba die from treatable health conditions, as they are unable to get the medical attention they need.

According to findings, two weeks before Yinusa’s death, the community had lost another man, Mr. Lawal Ashamu.

Olatunji Olorunsanya, who is Ashamu’s grandson, said he had been at a meeting in Epe on that fateful day when he was called that Baba was feverish. Olorunsanya said:

“It was on a Sunday and I was about to come to see him when I was called. I learnt he passed on 30 minutes after the call.

“Had it been that the primary health centre we have here was functional, they might have saved his life.”

If the situation is bad for those who suddenly fell ill, it is most times worse for pregnant women who need ante-natal and post-natal care. They are left with no option than to seek help from traditional birth attendants or give birth to their babies while being sailed in a canoe to the nearest health centre.

Asisat Rasaq, 25, is one of such women, as she recently birthed her twins in a canoe. Asisat said she started having contractions about 10 am on February 12, 2021, but had to wait for an available canoe to take her out of the community for delivery.

A canoe finally arrived around 4 pm, and six women assisted her into the canoe. But halfway into the journey, she gave birth to her twin boys.

“It wasn’t a good experience. It was the women there that took care of my delivery and we didn’t bother going to the hospital again.

“Ever since I gave birth to them, I have not visited the hospital, I use local herbs (agbo) for them, as prescribed by the elders among us and my children are doing fine.

“None of my children has taken immunization; I give them agbo. I gave birth to the first two children in ile alagbo (herbal home).”

“You see, the shore where you alighted is where we bend to defecate. That is where we take our bath and we drink from the same water,”

the 72-year-old baale of the community, Nurudeen Olowolayemo Ilufemiloye, said while pointing at the river.

Reporters observed some cheery children bathing and swimming by the shore of the river, while others were defecating at the same time.

Speaking in the Yoruba language, the baale said the community has been in existence since the 19th century. He said,

“We have always supported the ruling party in the state but we are suffering; we are really suffering.

“We move anywhere the party is moving but despite that, we are suffering in this community. The government does not even think of the community.

“We call on the state government to save us, for God’s sake. The community has no water, no light.”

SEE ALSO: Story Of Kundulum Community Where Pregnant Women Dread To Be In Labour At Night Throws Another Spotlight On The Country’s Poor Health System

Ilufemiloye also believes a functional health centre might have saved Yinusa that died.

“Sometimes, when our women are due for delivery and we want to take them to a health facility, the hyacinths obstruct the canoes, and they end up giving birth along the way.”

He added that an electric pole was installed in the community in 2015 but it has not been connected to the grid.

“We are suffering, yet we claim we are in Lagos state,” he lamented.

While the World Health Organisation says the fundamental premise of primary health care is for people everywhere to access the right care in their community, the health centre in Oriba falls short of this.

The PHC in the community is now in a state of total disrepair, due to many years of neglect.

The facility has been overtaken by weeds, while a small signboard on the wall shows that the structure was renovated in 2012.

The baale forced the locked rusted gate open while urging for caution so as not to step on a harmful object.

On entering the facility, mouse and goat dung littered the corridor of the building. The baale said:

“Someone comes here to sweep it once a while, but I heard they pay her N10,000 monthly. The other person who is meant to cut the weeds has not been coming.”

He drew the attention of our correspondent to the two blue empty water tanks and a big sound-proof white Kipor generator abandoned in the facility.

The baale said the health centre was built over 100 years ago but has never been functional.