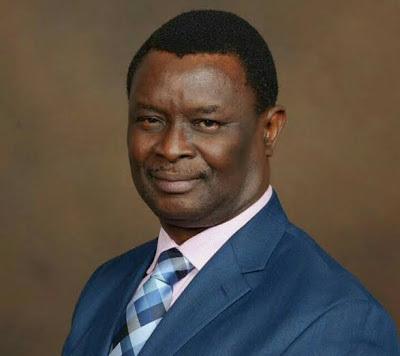 Nigerian Gospel film director, and the founder of Mount Zion Drama Ministry and Mount Zion Television, Mike Bamiloye, has shared wise counsel with single men on how to get it right in the place of marriage.

In a post shared on Facebook, the happily married dad-of-three and grandpa mentioned that for men to get it right, they must drop the habit of changing women they have affairs indiscriminately.

According to the clergy who has been married for over three decades, if any man thinks the definition of enjoyment, is to change ladies like HandkerChief, he will be the loser at the end.

Citing examples of men who lost it in the place of marriage and purpose in life, Bamiloye confirmed that ‘NO MAN HAS EVER WON THE GAME WITH WOMEN…..’

With the number of years he has been married, one can safely assume that he is qualified to render advice to young men and women.

”GET IT RIGHT FROM THE START…

Right from the Foundation of Samson, he had been falling in love with a wrong woman. The first woman he would ever fell in love with was the Philistine lady in the vineyard of Timnath, who was being guided, so to speak, by a young lion. (Judges 14) The marriage ended up in crisis and collapsed.

Then, we read that he had affairs with the Harlot of Gaza. The last major crisis was the affair he had with Delilah of the Valley of Sorek.

Young Men of this Generation,

Don’t gamble or Casino with Women,

It is not a joking matter.

If you think the definition of Enjoyment, is to change ladies like HandkerChief,

You will be the loser at the end,

NO MAN HAS EVER WON THE GAME WITH WOMEN…..

Women Issues: Fertility Expert, Dr Abayomi Ajayi On Coping When Everyone Is Getting Pregnant Except You

YOUNG MAN, if you truly have a Vision and Mission to fulfill for God in your Generation,

If truly you want to fulfill Purpose and confirm Destiny,

GET IT RIGHT IN THE PLACE OF MARRIAGE.”

SEE ALSO: Planning To Get Married Anytime Soon? Gospel Film Director, Mike Bamiloye Has An Advice For You 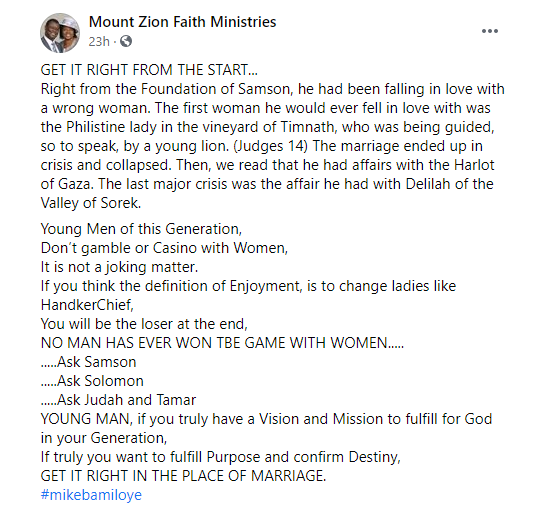