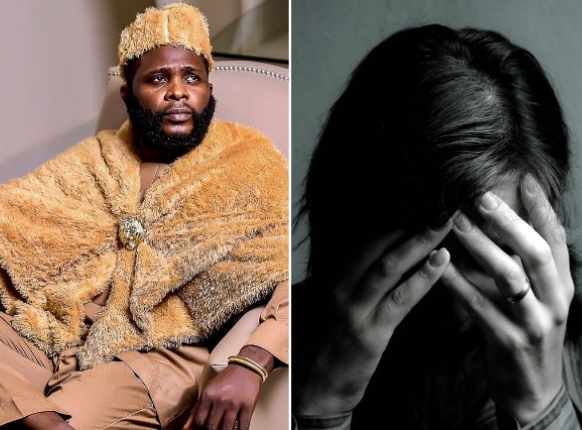 The reasons why there has been a rise in the number of women, especially the married ones, being infected with HIV has been adduced by relationship doctor, Joro Olumofin.

The self-acclaimed “Love Doctor” asserted on his Instagram page that a lot of women are getting infected with HIV because of the fear to tell their partners to use protection and ‘I must keep my home syndrome’.

According to Olumofin, he deals with a lot of HIV+ people searching for love every day and he expressed how bitter he is to find that over 70% of them were women who were infected by their husbands.

However, the relationship expert urged women to demand the use of protection by their partners especially when they are now in doubt of their activities.

“I deal with a lot of HIV+ people searching for love everyday. It’s so sad that 70% of them were infected by their partners (Mostly Husbands).

Wives/Ladies if you don’t trust your BF/HUSBANDS PLEASE DEMAND he uses protection. If demanding protection will lead to the end of your marriage then SO BE IT.”

READ ALSO: Why Nigerian Courts Should Enforce A Law That Majorly Favour Women After A Divorce – According to Joro Olumofin 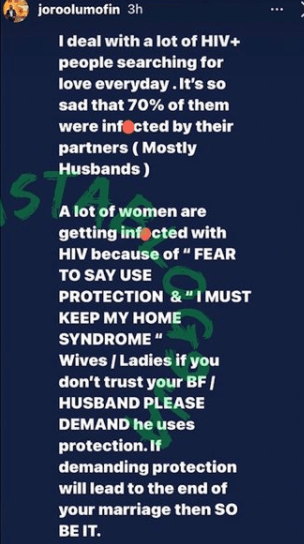 Reacting to his post, many social media users nodded in agreement.

olubeey said: “Where is the lie? This’s the gospel truth!”

chinonso.nzeh said: “Where’s the lie??? I remember going to the hospital and the doctor telling me a story of a Naval officer who gave his wife HIV, he takes ARVs and is well, his wife later died…”

bube_aji wrote: “He has a point. Don’t endanger your life to please anybody.”

muwae12 wrote: “This so true, I worked as a HTC in 2019 , innocent women would be minding their business and their husbands would give HIV, God help us.”

momwives_platform wrote: “The damn truth! I am glad it is coming from a man.”

i_am_citoma said: “louder!!! Too much carriers capable of infecting the loyal ones!!”

tamie_herbs wrote: “Yes, cheating is rampant amongst Nigerian men because the society favors men and their natural desires.”