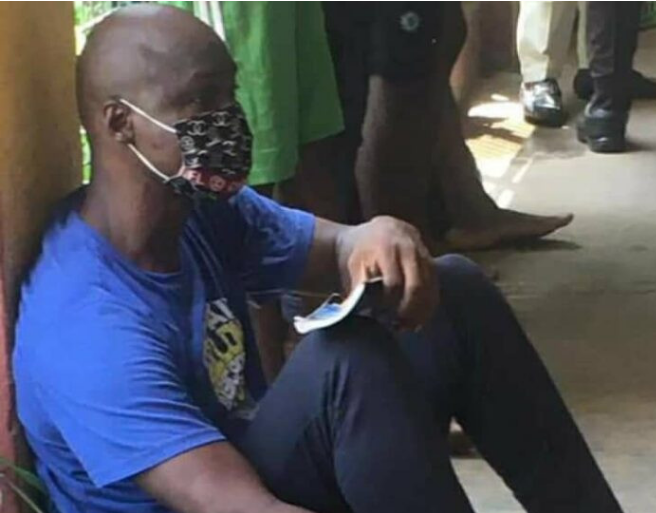 The sexual abuse case against Nollywood actor, Olanrewaju James, popularly known as Baba Ijesha, continued and a tape of the victim speaking about the incident was played in court.

During the trial, on October 20, in Lagos, the court played a tape recording of the alleged victim’s interview with child rights advocate, Bisi Ajayi Kayode.

In the video played in court, the alleged victim, who is underaged, narrated how Baba Ijesha allegedly assaulted her 7 years ago when she was just 7 years old, and how he tried again recently after she turned 14.

She said that Baba Ijesha visited the house where she was staying with her guardian, comedienne Oluwadamilola Adekoya, better known as Princess, and brought out his penis then asked her to sit on his lap.

She said she was engrossed in the cartoon she was watching on television so she sat on his lap until she felt something wet on her body. The victim said:

“I didn’t make a sound after seeing his private part. I sat on his laps myself and removed my pant because of my concentration on the cartoon I was watching.”

Using a doll to demonstrate how she sat on Baba Ijesha’s lap, the girl said:

“I sat in front of the television trying to watch cartoon. Baba Ijesha told me to come and sit on his lap and so I did. Then he removed his private part and told me to sit on him.”

The 14-year-old girl said she soon felt something wet and then went into the bathroom to clean herself up with a towel. She said Baba Ijesha didn’t say anything afterward.

She claimed that Baba Ijesha returned again the following day and penetrated her with a key. She alleged:

“He parked his car away from his house and that was where he inserted his car key into my private part while trying to kiss me. When he inserted the car key, I felt some type of way.”

The girl then demonstrated how he allegedly penetrated her with the car key. She said she eventually told her mother about the incident on April 17, 2021, and on April 19, 2021, CCTV was set up to get evidence in order to charge Baba Ijesha to court.

Also in another report, Ajayi-Kayode said that the minor was capable of recalling events that occurred when she was aged seven years.

Ajayi-Kayode, a legal practitioner and Executive Director of the Cece Yara Foundation, a Non-Governmental Organisation, is the third prosecution witness in the ongoing trial.

The News Agency of Nigeria reports that the prosecution witness made the assertion while being cross-examined in the trial of Baba Ijesha, who is facing trial for child defilement.

Ajayi-Kayode, who was being cross examined by defence counsel, Mr Babatunde Ogala, told the Ikeja Special Offences Court, that the child’s brain cells were developed enough to totally recall events accurately. She said:

“At seven-years the child has enough speech for a narrative recall of events that transpired.”

Ajayi-Kayode said that when she conducted a forensic interview on the minor, she gave a “free narrative recall” of events that transpired seven-years ago.

The witness said that during the interview, she asked the minor “neutral, open-ended” questions to determine whether or not she was being coached or lying.

The witness said that she would not claim that the minor was neglected because from her experience, 90 per cent of people who abuse minors are well known to the children.

Also, +(SAN), a member of the defence team, requested to know from which institution Ajayi-Kayode obtained her qualification in child forensic psychology.

The prosecution witness said that though her academic background was in law and social welfare, she was certified in child forensic interviews by undergoing a series of trainings.

Princess, the foster mother of the minor and Nollywood actress, Ms Iyabo Ojo, were present in court during the proceedings.

The prosecution led by Mrs Olayinka Adeyemi, the Lagos State Director of Public Prosecution (DPP) has so far presented three witnesses in the ongoing trial.

The witnesses are – Princess, the minor and Ajayi-Kayode, a child expert.

Justice Oluwatoyin Taiwo adjourned the case until Oct. 21 for continuation of trial.