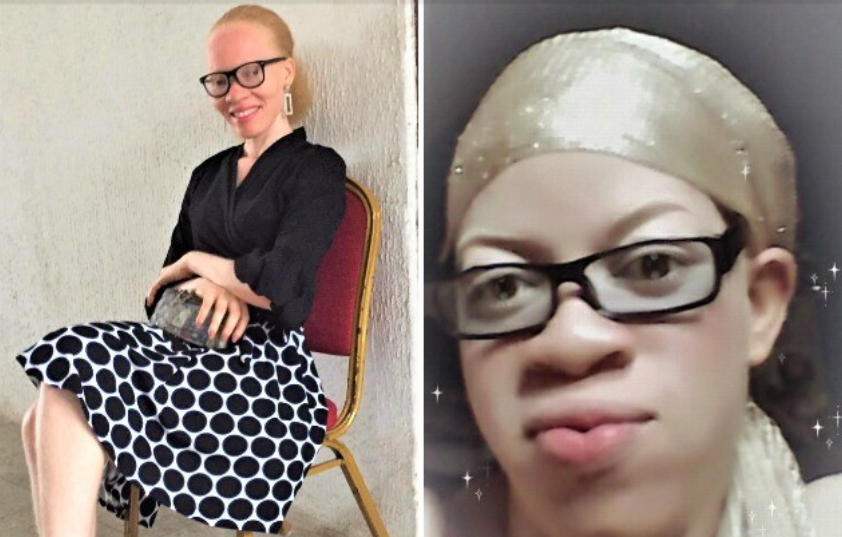 Surviving in Nigeria is a real struggle for most persons living with albinism, as they have to contend with not only peculiar health challenges because of their condition but also suffer discrimination from employers of labour.

Two women and activists living with albinism shared their emotional story of struggling against the misconception of employers about the health condition and how ignorance of employers about albinism has affected their quest to be gainfully employed.

For Vivianmary Ezeonwumelu, a graduate of Office Management and Technology from Federal Polytechnic, Oko, Anambra State, it has been a rocky road to gainful employment since she graduated.

According to Vivianmary, persons with albinism in Nigeria are going through tough times to get and keep jobs because of the misconceptions of employers about their health status.

She, however, noted that while these misconceptions are mostly out of ignorance about albinism, it has been a major barrier to good job opportunities for persons living with the condition.

The attendant effect of the misconceptions, Vivianmary said, is that albinos who are willing and ready to work so that they can earn a decent income to enable them to afford the special care their skin and health need are now resorting to unhealthy jobs that make them more prone to skin cancer.

Sharing her peculiar experience with PUNCH HealthWise, Vivianmary, who is the President of People Living with Albinism in Anambra, said it has been difficult and frustrating searching for a job, noting that she is always considered unfit, due to her skin colour.

We suffer double jeopardy due to our skin colour

“Life is very difficult for persons with albinism. In fact, we suffer double disability because we are trying to protect ourselves from the sun and at the same time some of us can’t say ‘I cannot work in the sun’ because how would you feed, how would you survive?’

“So, we are struggling to fit into the society, as well as get a good job at the same time. So it is a double disability.”

Sharing her job-hunting experience, the postgraduate diploma holder of Business Administration and Management said it has been a fruitless journey so far, lamenting that it is frustrating and annoying dealing with the discriminatory attitude of Nigerians to albinos, especially as it relates to job hunting.

“I have experienced a lot of discrimination. The major challenge we have is that quite a lot of people with albinism are jobless. We don’t have any meaningful jobs.

“I was invited for a job interview, where I did everything well. I was the second best applicant and I passed the oral interview.

“However, when it got to the stage where we met the MD, I was disqualified. The MD himself disqualified me. They will not tell you the reason but you will know.

“At the end of the process, the person employed was someone that I scored more than at the interview.

“That was the person that got the job and I don’t need someone to tell me it’s because I am a person living with albinism.

“As I speak with you, I am unemployed. The little work I’m doing is with an NGO, and I am paid below the approved minimum wage. And in this economy, how do I feed, take care of myself, pay my house rent from that money?”

The activist further shared that even when she got a job as a salesgirl and was promoted and made a sales manager due to her brilliance, she had to eventually resign because the job but was unfit for her as a person living with albinism, noting if she had not quit the job, she could have suffered serious skin damage.

Speaking on how her skin colour has impacted her relationship status, Vivian said the road to finding love has been unpleasant, noting that many of her promising relationships ended after meeting with the parents of the man. She said,

“I have been in some relationships and this time I have decided not to venture into any relationship again. This is because, at the end of the day, it doesn’t always end well. The story always changes.

Even if you meet someone that truly loves you, once they take you to their parents, that is the end of it. The person will be like, ‘Eh, no, I don’t want to have an albino,’ not knowing that none of my parents is an albino but they gave birth to albinos. People are just ignorant.”

Despite not being gainfully employed, Vivianmary says she is determined to help raise awareness about albinism.

On the contrary, for Mrs. Nnene Bassey, a 30-year-old mother of two, while finding love was not a difficult experience, being gainfully employed has been frustrating, due to discrimination.

Nnene who is the President of Persons With Albinism in Akwa Ibom State said she has had to contend with listening to insensitive comments by people telling her to her face that she is unfit, even for government jobs.

Sharing her experience, the medical graduate said she had, at several times, applied to various armed forces agencies of the government but wasn’t successful, noting that they all turned her down because of her skin colour.

She added that her most painful and unforgettable experience was at a naval recruitment exercise in Calabar, where a naval officer told her that she was wasting her time.

“I have applied to work for different armed forces in the country with no success but the worst of it was in 2015 when I applied for a job with the navy,”

Narrating her experience further, she said,

Asking further if she thought she was fit for the military job, Nnene a medical graduate said she had applied to work in the medical unit of the force which, according to her, was not in any way a risk to her health.

Yet, the Federal Government through the Ministry of Education had, in 2012, announced a National Policy on Albinism which was supposed to help curb cases of stigmatisation and discrimination against persons living with albinism.

The aim of the policy was to “mainstream albinism into every sector of development” and was also intended to “improve the status of PWA by harnessing their full potential and guaranteeing equal access to education, social, health, economic and political opportunities.”

Notwithstanding the policy, people living with albinism in Nigeria have continued to face all sorts of challenges and discrimination.

“The general health of a child and an adult with albinism is normal and the reduction in melanin pigment in the skin, hair and eyes does not affect their brain, their cardiovascular systems, their lungs, immune system, or other parts of their body,”

Also, recall that The Albino Network Association has flayed the discrimination against persons with albinism.

TANA had made the call in a statement it released in commemoration of the 2021 International Albinism Awareness Day, noting that government at all levels needs to address the inequalities and violations that persons with albinism suffer in their struggle to exercise their fundamental human rights in Nigeria.

According to the United Nations, the prevalence of albinism ranges from one in 5000 to one in 15,000 persons, with some populations in southern Africa even having one in 1000 persons. In Nigeria in particular, there is no accurate data on the population of PWAs due to a lack of disaggregated data.

Persons with albinism have normal intelligence to work

However, also speaking, a Consultant Dermatologist at the Lagos State University Teaching Hospital, Ikeja, Dr. Folakemi Cole-Adeife says skin colour should never be an issue when employing people, noting that persons with albinism have normal and above-average intelligence like every other person to work.

She noted that the only challenges faced by people living with albinism are increased sensitivity to the sun due to the lack of or low levels of melanin and poor vision.

Tackling the issue of poor vision in childhood, she said, is essential to aiding a person living with albinism to attain any level of excellence either in academics or professionally.

READ ALSO: Albinism: Facts, Social And Health Issues And What You Need To Know About The Condition

Cole-Adeife, who is also a consultant physician said, “people with albinism have normal to above-average intelligence. They have normal physical functioning of every part of the body except the skin and eyes.

“Their only challenges are increased skin sensitivity to the sun due to the lack of and low levels of melanin and poor vision.

“This poor vision which occurs from birth or early childhood sometimes affects their academic performance if it is not adequately addressed by parents and teachers at an early age.”

However, the dermatologist, discouraged persons with albinism from taking on jobs that would require them to spend a lot of time under the sun, noting that they would be exposed to increased risk of sun-induced skin damage and life-threatening skin cancers.

Cole-Adeife also stressed that it is unethical and even illegal for an employer to deny a person with albinism employment for the sole reason that they have albinism.