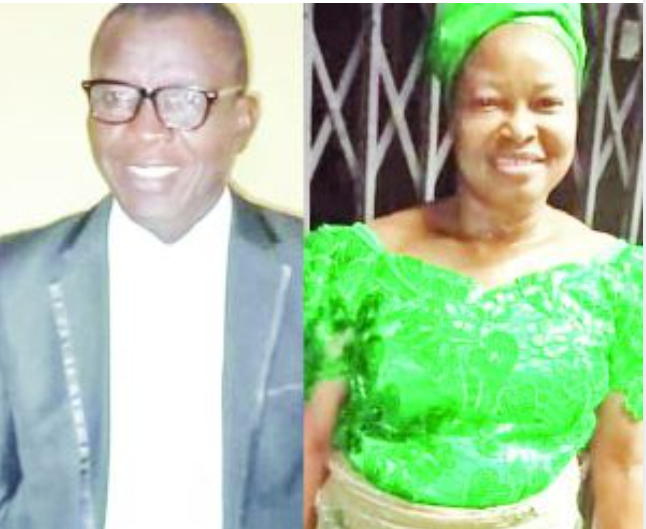 If there is a debate today as to whether one should marry early or late, Celestine Ikechukwu Odogwu, Founder and Pastor at God’s End-Time Winners Church, Aba, Abia State, would go for the latter.

This is because he himself married early in life to his own jewel of inestimable value, Sabina Chidinma Odogwu, nee Iheanacho, before 30. And, looking back today, he does not regret his decision as the two are already proud grandparents to their children’s children.

Talk of fortune smiling on some couples in a world where marriages are collapsing, and where couples are divorcing at the rate of two or three cases per week. But it’s not so for Pastor and Pastor Mrs. Odogwu.

By the grace of God and dint of marital principles they espoused in this interview with DailySun, how they have been able to live together as husband and wife for 30 years.

What are their secrets? Those are the things that Celestine, a full-time head of the church, and his wife, Sabina, a trained nurse and a community health worker, in Ukwa West Local Government Area of Abia State shared with us.

Celestine: My parents came from Ogor in Afa, Udi Local Government Council Area of Enugu State. We used to live in Mgbidi, Imo State, from where I attended a Deeper Life Bible Church, in neighbouring Awo-Omama town. That was where I met my wife. She was a member of the Watchman Catholic Charismatic Renewal Movement, in Awo Omama. I was young, about 27, 28 years old. I was a trainee pastor.

Although I had nothing on me at that time, I received a revelation to get married. After repeated signs, I told my Senior Pastor then, Pastor Paulinus Onyemaechi, who informed me of the process of meeting with and obtaining approval from the marriage committee.

At the meeting, the committee, however, told me that there was an official letter signed by the Deeper Life General Superintendent, Pastor W.F. Kumuyi, introducing a brother from Lagos, to woo and marry the same girl I was interested in. Chidinma, on her part, was also invited by the committee.

While interacting with the members, she told them that she had been instructed in a revelation to marry me. After repeated prayers, the church approved our marriage. Our courtship lasted for four years, but during those years, none of us visited the other without obtaining permission from the Deeper Life church leadership. We were later allowed to wed in January 1991, without touching or seeing each other’s nakedness.

Chidinma: While he was praying, and being repeatedly directed to get married. I was also getting the revelation that he was going to be my husband. Because of this, I did not mind his not having anything then.

I also did not entertain any double feelings for the first man that approached me for marriage. I did not consider the fact that he came with a letter from the General Superintendent of his church, Pastor Kumuyi, to marry me. I had several dreams in which I was told that he was my future husband.

How did you formally propose to her?

Celestine: As I told you, it took four years for our dream to come through. When we were allowed to see each other, I told her that I would like her to be my wife, and mother of my children. She accepted the proposal, and we began to court, though under strict church procedure.

But the realities on the ground then did not expose me as one that was ready to marry. I didn’t have a steady income, nor was I doing any work that could sustain a family and take good care of a wife and her children. I was an evangelist and preacher of God’s Word.

SEE ALSO: See If You Agree With Media Personality, Mallam Figo’s Stance On Why Men Should Marry Early

Why did you accept a marriage proposal from such a man who didn’t seem to have a future, as it were then?

Chidinma: As a young girl, I felt that wealth and financial enablement to sustain a family would come from God. I did not hesitate to accept his proposal since it had already been revealed to me, spiritually. I said: “Okay, let’s keep looking up to God for direction.”

After the wedding, what happened next?

Celestine: After our wedding on that January day, I brought her into an empty house. It was like a dream. I had nothing but had to put my whole trust in God.

The church, friends, and relations made our coming together a reality, but I was scared of going into immediate childbearing, for fear that I would not be able to take care of her and the child.

This was due to economic reasons. I was a freelance pastor if there was anything like it. This is because I had not gotten deployed or attached to any church, pastorally, to take care of my personal needs.

Chidinma: Before we married, I had trained as a nurse. So, I began practising, though on a small scale. So, his not earning money did not worry me nor cause any disaffection between us. This is because we had come together in obedience to God’s directive.

Now, with all that assurance, did you continue to live in fear of not being able to care for a child in case you were blessed with one?

Celestine: No. Our first child, a male, Prince Joshua, was born, barely a year after our marriage, in 1992. He was followed by our daughter, Adaeze Deborah, two years later. The third and last child, another boy, David Chibueze, was born in 2006.

Prince Joshua is a doctor of Veterinary Medicine from the University of Nigeria, Nsukka (UNN), while Adaeze (now married with three children), graduated from the Michael Okpara University of Agriculture, (MOUAU), Umudike, with a degree in Food Science Technology. David is currently in his second grade in a senior secondary school in Aba  The Lord has been faithful to us as He promised when we came together with nothing.

My wife, who began as an auxiliary nurse with low qualifications, had been able to attend a tertiary institution, obtained certificates, and read further courses that lifted her. She’s also a well-trained professional in Community Health Nursing.

Chidinma: God had been kind to us, and because of the way we began, we have always worked together to realise our dream projects. Though it has not been easy, we always have a way of coming to a meeting point on issues affecting the welfare of the family, and ours as individuals, including the children.

What was the first major misunderstanding that you had in marriage, and how did you settle it?

Celestine: One was caused by my mother. It was during the early days of our marriage, when we had our first son. She had come to stay with us for a while. One day I noticed that her countenance was bad. I called her and enquired what the problem was.

She complained that my wife had put only one piece of meat in the food she gave her to eat. I was not happy with her and cautioned her to leave my wife alone to live her life. I told her not to ruin my marriage and reminded her of the lessons she used to give us, her children, to be appreciative of whatever people offered us.

I made her know that the house we were then in belonged to my new wife and that she had the authority to manage its affairs. She realised her mistake and quickly apologised. At the time, we were managing to stay afloat. Another occasion that made me angry came from my wife.

She reported me to our church board on a matter I had settled at home. She had quarrelled with our maid and treated her harshly. I did not like what she did and cautioned her. However, instead of taking correction, she went and reported me to the church board of which I was the presiding head.

I told the board members what she did, and she was reprimanded for it. My wife is very conservative and likes being on her own. She saves me from many talks. You may not know when she is in the house. This is from her upbringing. She doesn’t like wastage in the home.

Chidinma: My husband is, sometimes, autocratic, and doesn’t listen to my reasoning.  He is an outspoken kind of person and fights for people’s rights. He tries to carry people’s problems and fights for them, even while endangering his own life. He, sometimes, cautions me openly before people, including our children, an act I look at as not good. Yes, we disagree sometimes, but we settle the matter between us. I always want him to follow things systematically.

Have you had any cause to regret choosing her or him as a wife or husband? If yes, what was the reason?

Celestine: No, I have had no regret in bringing her in as my wife. She came into my life when I had nothing, and in fact, was nothing. Now, she is a graduate, and still going on. My siblings and entire family, cooperate with her.

Chidinma: I don’t regret choosing him as was directed by God. From our days of little beginning, we have been able to establish a home, a family. We are now grandparents and the church God gave us to manage is moving from glory to glory. I am full of thanks for heeding God’s Word, and for being guided by Him.

ALSO SEE: Bishop And Mrs. Elom Share Secrets Of Their Happy, Enduring Marriage Of 25 Years In spite Of The Challenges That Arose In The Early Years Of Their Union

What advice do you have for new couples and youths going into marriage?

Celestine: Marriage is very good, and takes maturity to sustain. I am a beneficiary of early marriage. So, I will recommend it to a willing couple that wants to enjoy life to its fullest. People need to involve God in their marriages. He has helped me a lot, in my life. His goodness and mercy have helped us to endure life’s problems. Don’t create rooms for other persons to rule your home.

Chidinma: I sometimes reminisce on how my husband and I started, and what had kept us together until now. People wanting to marry should believe in each other, trust each other and make God their leader. The women should love their husbands, and always make them happy. They should do things that will honour God and their families.  They should not allow a third party into their affairs.