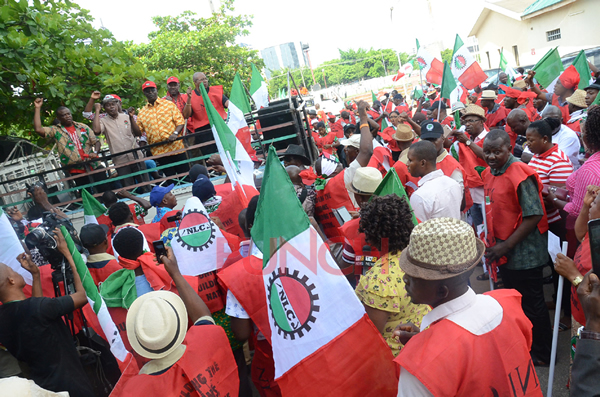 ‘I Wrote My Will, Sold My Properties, Booked Burial Space’ -Actress And Mum, Kemi Afolabi Recounts Battling Incurable Disease In 2021

The Nigeria Labour Congress, NLC has told the federal government to do away with any plan to increase the price of petrol.

In a report by Vanguard, NLC said that workers and masses will not accept any further increase in the pump price of fuel in the name of subsidy removal, urging workers and the citizens to prepare for total war against fuel price hike.

In the message titled YEAR 2022 FELICITATIONS: KEEPING OUR HOPES AND ASPIRATIONS ALIVE IN THE NEW YEAR, NLC directed the affected states to commence indefinite strike to force the respective state governments to implement the new wage.

In a 9-page statement, NLC among others, said still, the government is not relenting in its determination to push through further increases in the pump price of petrol and which as usual had been dubbed as “removal of petrol subsidy”.

“Well, Organized Labour has made its position clear on this matter. We have told government in very clear terms that Nigerians have suffered enough and will not endure more punishment by way of further petrol and electricity price increases.

Our position in this regard is predicated on four major grounds. First is our concern on the deceit and duplicity associated with the politics of “petrol price increase” by successive Nigerian governments. The truth is that the perennial increase by government of the pump price of petrol is actually a transfer of government failure and inability to effectively govern to the poor masses of our country.

We are talking of the failure of government to manage Nigeria’s four oil refineries and inability to build new ones more than thirty years after the last petrochemical refinery in Port Harcourt was commissioned; the failure to rein in smuggling; and the failure to determine empirically the quantity of petrol consumed in Nigeria.

The shame takes a gory dimension with the fact that Nigeria is the only OPEC country that cannot refine her own crude oil.

During the negotiations that trailed the last increase in petroleum prices, Organized Labour made a cardinal demand on government which is that it must take immediate steps to revamp and rehabilitate Nigeria’s refineries.

A Technical Committee was set up to monitor progress in this regard. As we all know, the work of the Technical Committee like our abandoned public refineries has ground to a halt and further negotiations with government adjourned sine die for nearly one year now. As a responsible social partner, we have at different times called on government to show us what they are doing in response to our demands but silence is the response we get.

All we hear from government are half-hearted media pronouncements on efforts to allocate funds for the rehabilitation of our public refineries. On ground, there is no commensurate action. Between 2012 and now, about $9.5 billion has been spent on Turn Around Maintenance (TAM), Greenfield Refinery Projects and even public investments in private refineries.

This neo-colonial narrative in Nigeria petroleum sub-sector is what the Nigerian working-class family has rejected as unfathomable and unacceptable as it is antithetical to the notions of sovereignty and self-actualization and a mockery of the sacrifice of our heroes past.

Even in the classic example of capitalism, there is something called the theory of comparative advantage where a country deploys its strategic assets to secure the highest possible positive outcomes for its citizens.

Unfortunately, successive governments in Nigeria have failed to take strategic advantage of our natural endowment in oil and gas especially our prime position as the highest producer of crude oil in Africa to expand our economy, induce economic growth and engender sustainable national development. Today, instead of referring to crude oil as the blessing that it is, we now commonly describe this gift of God to Nigeria as “Resource Curse”.

The quagmire of the Dutch Disease or Resource Curse in our country is most exemplified in our downstream petroleum sub-sector. The despair of our unfortunate Catch 22 situation is that government increases the pump price of petroleum products when the price of crude oil increases and falls in the international commodities market.

The explanation is that such increases automatically translate to increases in the price of refined petroleum products. When the price of crude oil falls, the excuse is that the enormous pressure on the value of the Nigerian Naira occasioned by drop in forex revenue exacerbates the crisis of Naira devaluation and causes hike in petrol price.

Even to the blind, the solution is clear – Nigeria must regain her capacity to locally refine petroleum products. There is no escaping the fact that our public refineries must be made to work. There is no short cut to the reality that we must replace the exploitative and subservient policy of Import-Based Price Regime with Local Production Based Price Regime for refined petroleum products.

There is no explaining away through disingenuous Power Point presentations, procured rallies and over-rehashed publicity in the media the simple fact that as a major Oil Producing country in the world and after nearly seventy years of oil exploration in Nigeria, our country cannot deliver on efficient and effective public petroleum refineries.

Nothing dents the image of Nigeria and presents us as a country incapable of providing governance as the failed narratives in our downstream petroleum sub-sector.

Second, we are concerned about the missed opportunities and hemorrhage of potential revenue to public coffers that government’s continued apathy to reconstructing the current negative narrative in our downstream petroleum sub-sector. The advantages and multiplier effect of local refining of petroleum products in Nigeria are enormous.

There is the angle of mass job creation, increase in revenue accruable to government, promotion of environmental integrity in oil bearing communities as the scourge of artisanal refining with its deleterious impact on the environment and the consequent unrests and agitation such oil pollution precipitates would take a nose dive.

The truth is that with self sufficiency in oil refining, Nigeria will be able to meet not only demand for local consumption but also will be in a grand position to cater for the refined petroleum needs of the sub region and the African continent as a whole.

Unfortunately, the comparative advantage that government fails to see as strategic business opportunity, private investors such as Dangote Group are taking this advantage and are moving mountains and valleys to syndicate finance from institutional lenders to establish one of the largest petrochemical refineries in the world in Lekki – Lagos State.

For us in the labour movement, we do not believe that government is shortsighted to the huge benefits accruable to the commonwealth by the robust development of the downstream petroleum sector especially through investment in the rehabilitation of our four public refineries and building of new refineries.

Given the direct relationship between the outrageous amount said to be invested in the payment of the so-called petroleum subsidy and the pressure to get foreign loans from Bretton Wood Institutions to meet perennial shortfall in revenue, we believe that the crisis of the under-development of Nigeria’s downstream petroleum sector, the comatose of our four public refineries and the inability of successive government to right this economic sabotage smacks of an international conspiracy at the behest of local collaborators to keep the Nigerian economy and people perpetually on their knees.

The suggestion by government that the remedy to this malady is to stop further payment of the so-called petrol subsidy is akin to cutting one’s nose in order to spite one’s face. What the government is proposing is to abandon the Nigerian workers and people to very cruel market forces whose sole drive is profit maximization.

This is why we believe that private investment in building petroleum refineries is not enough. Government must ensure that public refineries also work. This way, there would be true competition and Nigerians would be able to derive the most benefit from a resource that God freely and amply made available to the Nigerian nation.

We have also already described the idea of paying transport allowances as robbing ourselves to pay ourselves as the amount being bandied for such transport subsidy clearly outstrips the amount that is currently expended on the so-called petrol subsidy.

“Third, as a pan Nigerian organization, Organized Labour is concerned that the crisis in Nigeria’s downstream petroleum sector is further aggravated by the persisting tumult in the upstream subsector. It was recently reported that almost 200 million barrels of crude oil were lost in 2021.

This was as a result of crude oil theft, ageing infrastructure, poor long term investment outlay, poor security of our inland waterway, and challenges arising from conflicts with oil bearing communities and host communities of oil facilities. This is very unfortunate. Even more disturbing is the fact that just like the failed TAMs, no major culprit has been arrested and successfully prosecuted.

It is in these lights that we consider the current proposals by government at the clear promoting of Bretton Woods Institutions to increase the pump price of petrol as anti-people, insensitive and a disservice to the welfare of Nigerian people which government is constitutionally mandated to protect.

At our organ meetings which took place between December 15 and 17, 2021, the Nigeria Labour Congress took a decision to protest the planned hike in the pump price of petrol by government. The protest has been scheduled to take place in all the 36 states of the federation on the 27th of January 2022.

The protest in the state would culminate in the submission of protest letters to the 36 State Governors. Subsequently, on the 1st of February 2022, there would be a national protest to be held in the Federal Capital Territory. We urge Nigerian workers and people to dust their sneakers and fully participate in the peaceful protests and rallies aimed at salvaging our economic future.

Furthermore, the Nigeria Labour Congress has already barred its mind on the recent signing into law of the Petroleum Industry Act (PIA) by President Muhammadu Buhari. The agitation by different segments of society clearly shows that this very important piece of legislation which Nigerians have kept vigil over for so many years still does not sufficiently address the deficits of governance, oversight, investment, environmental integrity, local beneficiation and the use of petroleum resources to advance the cause of the ordinary Nigerian worker and citizen.

We call on the two chambers of the National Assembly to immediately commence the process of reviewing the Petroleum Industry Act to reflect the aspirations of Nigerian workers and people.”

“In the South West, most of the states are already in compliance. In the South South, the weak link is Cross River State which has spurned all negotiation agreements and entreaties to pay workers in the state the new national minimum wage and consequential salary adjustment. In the South East, the Imo and Abia State Governments remain thorns in the flesh of workers. Apart from refusing to fully implement the national minimum wage and consequential salary increase, the State governments have also been promoting clandestine and rogue labour leaders unknown to the labour movement.

“In line with the directives of the National Executive Council of the Nigeria Labour Congress, we have asked our state councils to commence industrial actions against state government that are yet to implement the new national minimum wage and pension. It is disheartening that amidst the current economic crunch prevalent in the country, some State Governors still need persuasion to pay workers the national minimum wage.”