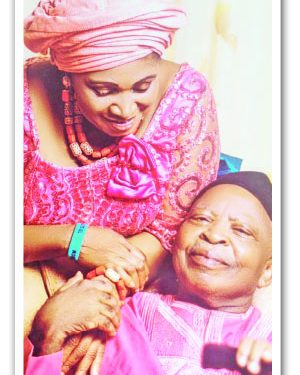 Here’s Why Actor And Dad, Okon Lagos Is Calling For Urgent ‘Fixing’ Of The Boy-child | A Must Read!

In fact, since their wedding, they’ve never looked back as far as peace, harmony, and progress are concerned. Blessed with 7 children, one of whom is Rev. Fr. Sylvester Ejike Ozioko, of the Catholic Diocese of Nsukka, the couple is happy to be alive to celebrate the golden jubilee of their wedding this month.

In a chat with DailySun, they shared experiences on the virtues and values that have kept their marriage going for such a long time. They are experiences that both intending and young married couples will do well to learn from.

Tell us how you met each other before you eventually got married?

Pa Sylvester: I was teaching at Saint Charles Primary School, Ehandiagu, then in Isi-Uzo Local Government Area of Enugu State when I met her. That was immediately after the Nigeria/Biafra Civil War in 1970.

There was a popular drinking joint where we used to go to drink palm wine after school hours. One afternoon, my senior colleague, who happened to be the school’s sanitary officer, and I went there to take some gulps of palm wine. But no sooner had we arrived than he asked me to follow him to another joint.

I did. It was there that I met her. I immediately got attracted. I asked the sanitary officer who she was but he never told me anything. I went back there the following day and asked about her from a woman who was selling things close to her bar.

She told me she had finished selling her palm wine and had gone home. By and large, I made enquiries about her from one Elder Michael Agboeze, and told him about my intention. He was the one who now took me to her father’s house at Ehandiagu.

On meeting her father, he told us that his daughter was old enough to decide whom to marry and asked me to talk to her directly. The moment we came out of their house, I told her my intention, and she agreed. That was how we met.

Ma Paulina: I had not met him before until that afternoon he came with his school’s sanitary officer to my palm wine joint. Actually, we were three girls that used to sell palm wine in that area. He later asked people about me. One of those he asked was a man we used to call Congo in those days.

He later contacted a fellow teacher and together they came to our house. Honestly, when I saw him, I was surprised. I was asking myself: Is this not the man that I saw in our bar the other day? In the presence of my father, he made his intention known.

My father then told him that he would receive a response from Congo. But he did not wait for that. While I was seeing them off, he called me aside and requested that I give him a reply immediately. I did though I felt shy being seen standing with him.

Was there any opposition from anybody – relatives, friends, concerning your marriage?

Pa Sylvester: No. There was no opposition at all from my family or from my in-laws. In fact, when I came here in Umuabor to tell my father that I had found a wife, he asked me who the person was. When I told him, he was extremely happy.

Ma Paulina: There was no opposition at all.

What made you decide to go for your wife out of the many ladies around then?

Pa Sylvester: First, her beauty. Second her dutifulness. Though I didn’t know her before we met, everybody knew her as a lady who didn’t indulge in frivolities. The moment she finished selling her product, she would leave for home. That showed dutifulness and hard work. Let me say that mine was what you can call love at first sight.

SEE ALSO: Here’s What The Abaimus Want Intending And Newly Married Couples To Learn From How They Overcame Challenges In The Early Years Of Their Marriage

What qualities made you choose him above other eligible bachelors or suitors?

He insisted he must be given the reply there and then. Though I had not known him before, that singular act made me feel that this is a man I could live with as husband and wife. Besides, he made it clear to me that he came for marriage, not for friendship.

Pa Sylvester: I told her that I wanted her to be my life partner. That was how I proposed to her. She agreed and I shook her hands in appreciation.

Ma Paulina: When he insisted that I give him the answer there and then, I told him that he could come with his people.

Pa Sylvester: We wedded in January 1971. One remarkable thing happened that day. We were already in the church at Saint Anthony’s Catholic Church, Isienu, when we discovered that the officiating priest was nowhere to be found. We waited in vain for him for several hours.

Fortunately, there was one Father Ugwu whom I had earlier given my wedding invitation card. He saw what was happening and decided to wed us, even though he was not initially the priest who was supposed to do that. I will never forget that incident.

Ma Paulina: There was a little tension but as God would have it, another priest who noticed the situation decided to wed us

Could you remember your first misunderstanding in marriage, and how did you handle it?

Pa Sylvester: I can’t really remember what caused our first misunderstanding. But in any case, since we got married, whatever misunderstanding we had, we had always settled it inside our bedroom. We don’t allow a third party to know what issue we have. I have never beaten her. I have not called her people to come and settle a quarrel or misunderstanding between us.

Ma Paulina: Since we got married, he has not beaten me. He doesn’t allow our misunderstanding to last more than two hours. He has not called my people to settle any case that I have with him.

Pa Sylvester: She is very sincere and organised. That’s why I dedicated my Diploma thesis to her.

Ma Paulina: He is hardworking and open-minded. If he tells you he does not have one naira, that’s exactly the situation.

There are a lot of crises in marriages these days? In your opinion, what are the causes?

Pa Sylvester: Number one cause is indiscipline. Another one is a misunderstanding.  Couples don’t agree on anything.

Pa Sylvester: Since the domestic training, which was obtainable during our own time, has been stopped, I suggest that churches be serious with their series of teaching on marriage. Young boys should look very well before they leap.

They should not jump into marriage without proper preparation like knowing who they are getting married to. They should be economically active by getting something doing, either as a trader, craftsman or salary earner.

Ma Paulina: They should know who they are getting married to before going into the marriage. Marriage is not something that you jump into today and jump out of tomorrow. Secondly, they should always be patient with their spouse. If things are not good today, they might be better tomorrow.

You have been in the marriage for half a century now, tell us the secret of your union.

In the light of rampant divorce cases these days, from your own personal experiences, what pieces of advice would you like to give newly married couples on how to make their marriage last as long as your own has lasted?

Pa Sylvester: They should build understanding between them. Know what your spouse wants. Know who she or he is. That is the key for a long-lasting marriage.

Ma Paulina: Couples should love and understand each other as well as avoid third-party meddling in their marriage.