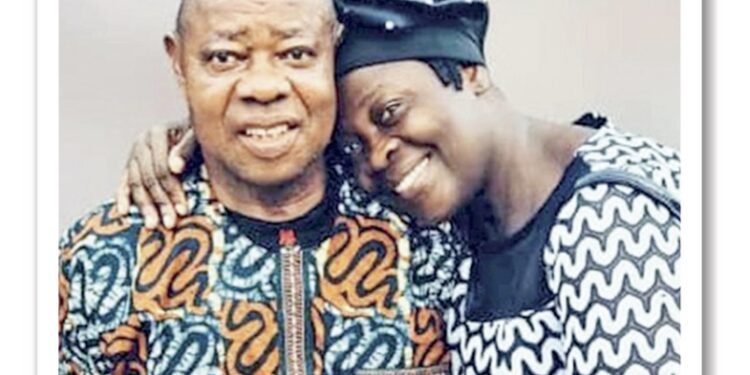 Mr Benjamin Umeononiru Izundu, a Lagos-based businessman from Umuchu, Aguata Local Government Area, Anambra State, and his wife, Favour Izundu, nee Oforjimba, also from the same village, have been married for about 30 years.

In a recent chat with Daily Sun, the couple talked about their marriage and what has kept it going over the years.

Benjamin: The first time I saw her was when she came to where I was working with her elder brother. She caught my fancy. My attention was drawn to her because I noticed her elegant look and her magnificent walking step. I developed a deep feeling of love for her but didn’t express it initially.

In fact, it took me about three years before I could reveal it to her. We had an annual Christian meeting back at my hometown. She was part of the ladies helping to serve meals. Fortunately for me, she served my elder sister and I. That was when I informed her about my interest and she gave her consent. The rest is history.

Favour: Actually, it was a divine arrangement. Though we were from the same village, I didn’t really know him; there was no close relationship with him. It was end of the year December 31st, 1981. I had a dream where I saw him at a junction; he was asking me some questions.

When I woke up, amazingly it was a dream. I thought it was an ordinary dream. To my greatest shock all that I had dreamt became a reality. I can’t remember where I went, but I saw him at that same junction, wearing same clothes and asking me same questions in my dream.

Benjamin: She caught my attention the first time I saw her. The way she walked was filled with elegance, her comportment and her great sense of aura.

Favour: Sincerely, I don’t have a particular feature to point to, but I was at peace knowing it was divinely arranged. Gradually, a deep feeling of love grew in my heart for him.

When you proposed, what was her reaction?

Benjamin: There wasn’t any excitement physically but I could sense it in my heart, because I was convinced about my love for her.

What was your reaction?

Favour: I didn’t reveal my excitement physically but within me I was a bit excited when he made his intentions known. I told him I would pray about it. But within me, there was an overflow of joy because it was a fulfilment of God’s word in my life. I felt it was already sealed; it was a confirmation.

In the early stage of your marriage, what were some of the issues encountered, considering your different backgrounds?

Benjamin: Well, just some petty things. For instance; I liked the house arranged in a particular way and when I leave the house, to my business place, I expect that when I returned home after the close of the day, the house should be exactly how I left it before going out.

But I would meet a different arrangement and order. I also preferred ‘swallow’ with egusi soup on a daily basis. My wife was the opposite. These were some of the individual peculiarities that affected us then.

Favour: I married my husband as a virgin. I had ideas of how to pleasure myself with my husband. But unfortunately for me, my husband was not what l had expected and pictured about our pleasure time. So the first issue we had was regarding sex.

As a virgin born again Christian, I had learnt a lot about sex through seminars and personal empowerment teachings. I was waiting to practise and explore it when we got married. I was a little bit disappointed. But we were able to work things out. Although it took us time before we could adjust.

Another difficulty we encountered was that my expectations of romantic relationship were cut short, as my husband is a typical Igbo businessman who is engrossed with business and have no romantic side. It took much time for us to meet our emotional needs.

The closeness and practical love I needed at that time weren’t there. My cravings for romantic and emotional expressions were not met. It became a need. As a result of this, I always cried my eyes out and even starved myself of food, despite having the money.

Romance in a relationship for me is vital. Also, I experienced educational barrier. I was an undergraduate before we got married. My husband did not have even an O’ level. Then it was very difficult for us to blend in the early stage of our relationship because our levels of understanding were totally different.

SEE ALSO: Here’s What The Abaimus Want Intending And Newly Married Couples To Learn From How They Overcame Challenges In The Early Years Of Their Marriage

What year did you tie the knots and what lessons have you learnt from your marriage?

Benjamin: It’s been 30 years of God’s grace and we are still counting. We tied the knots in 1991. I have learned, from the marriage institution. the truth that he that finds a wife finds a good thing and obtained favour from God.  There are several lessons in marriage. I have also learnt to strive to live in peace with my spouse.

Favour: I came to realise that the marriage institution is a citadel of learning that you cannot graduate from. I have also learnt that a good understanding is the key to a successful marriage.  Each couple needs to understand the weaknesses and strengths of their spouse. You can then make room for their weaknesses, and be able to patiently bear with them without overloading their individual strengths.

What cultural difference did you experience considering how you were able to blend in the process?

Benjamin: Majorly, it was our choices of food, and manner of tidying up things.

Favour: We had varied choices as individuals but later we had to compromise.

What are your tips for a successful marriage and the recipes that helped your union to thrive?

Benjamin: I owe this to God, as we have to always call on God. And we have several things in common. More so, both spouses have to do their part. They need to work each day to make their marital relationship a success.

Favour: Happiness is not the most important thing. Everyone wants to be happy, but happiness will come and go. Successful couples learn to intentionally do things that will bring happiness back when life pulls it away. They must be united and work in agreement.

Apologise when you are at fault. They must be transparent. Be honest, and have no secrets. Even when offences arise, we have to forgive and let the past go.

A couple in a successful marriage discovers the value in just showing up. When things get tough and couples don’t know what to do, they need to hang in there and be there for their spouses. Time has a way of helping couples work things out by providing opportunities to reduce stress and overcome challenges.

If you do what you always did, you will get same result. Wise couples have learned that you have to approach problems differently to get different results. Often, minor changes in approach, attitude and actions make the biggest difference in marital relationships.

Several violence acts are recorded in most marriages these days. What lessons might the younger generation learn from yours?

Benjamin: I am happy with my union, because I learned from my parents’ marriage. My parents were good examples; they never engaged in violence. They fought but we hardly noticed, as they never fought dirty.

Watching my parents as a young boy, I pledged to emulate the exemplary marriage they displayed. Though it was not the civilized romance of affirmation, the traditional love relationship left a legacy that we their children emulate.

Favour: Marriage is sacrificial. Everyone should be responsible to his or her responsibilities.  They should endeavour to be transparent at all times and appreciate their strengths while tolerating their weaknesses. Most importantly, get the marital foundation right in God’s presence.

What is your view on divorce and its high rate, at present, in the world?

Benjamin: Sad indeed! The rate of divorce has to do with anger, constant quarrels and unresolved marital conflicts. I don’t support divorce. If trust is placed in God, I believe He can change the situation of the marriage.

Favour:  Personally, I hate divorce. Scripturally, God hates divorce. There’s nothing impossible with God. Persistent high rates of divorce are behind the high percentage of children who grow up in a single-parent family.

ALSO SEE: Knowing Your Spouse Before Getting Married And More: The Oziokos’ Share Nuggets From Their 50-Year Marriage

How can couples prevent violence that occurs in marital relationship?

Benjamin: When one is angry because of provocation, the other spouse should not spark it, rather they should employ ways to calm the situation. You don’t need to join in, just be calm and apply wisdom.

Favour: Conflict is part of every intimate relationship; that’s why conflict resolution skills are very important. Patience is a virtue because things might not exactly go the way they had appeared. Couples should have good understanding and forbearing with one another.

What advice do you have for younger couples that can ignite the fire of their love  for each other as to make their marriage enjoyable?

Benjamin: Be together and trust each other.

Favour: They should be friends with each other, with time they would become best of friends. Be open to each other, always communicating. Most importantly, always pray and trust in God.

Younger women should emulate the biblical definition of a virtuous woman and should not compare their homes or spouses with others. Everyone has different grace. Our individual levels of grace vary.

Offences abound in every relationship but some couples don’t know how to forgive their spouses. How can they manage a toxic environment?

Benjamin: Treat each other with love and respect. Be each other’s biggest cheerleader. Put God in the centre of your relationship by praying for each other. Don’t badmouth each other in front of others.

Favour: Keep the cross at the centre of your marriage. Be willing to lose disagreements. You don’t always have to be right. And laugh together as much as possible.

Pray with each other every day. Learn to hold hands. Keep dating long after the wedding and especially after the kids had come along. Remember a good marriage doesn’t just happen. You have to work at it.