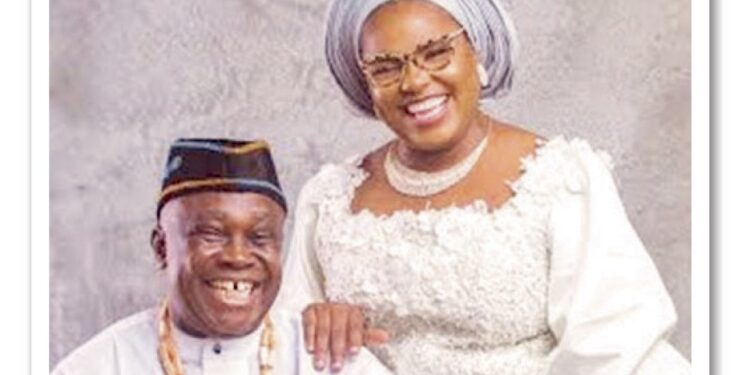 Dr. Aniefon and his wife, Grace Akpabio have been married for 31 years. While Aniefon is retired from the Ministry of Environment, Grace is currently serving as Deputy Director, Monitoring and Evaluation, Department of Planning, Research and Statistics at the NYSC Headquarters, Abuja.

The couple who met at a church event and got talking when they shared space under an umbrella because of the rain, spoke about the secrets of their happy marriage with Daily Sun in this interview.

Could you tell us how you met before the two of you got married?

Aniefon: We met at Qua Iboe Church (QIC), Surulere, Lagos. I went to the church after having worshipped at Christ Chapel which I had grown fond of as a new Christian convert. Being born-again was a fad for young men and women in those days. I was at QIC to attend a meeting of “The Young Stars.” It was raining.

The two of us arrived late and we took shelter from the rain at the aisles of the church. She extended her umbrella and asked me to join. We struck up a conversation and found that our lives were full of coincidences, from background to where we had grown up. And we had never met except there and then in far away from Lagos as indigenes of Akwa Ibom State.

She had grown up in my village, Etinan, and her father had taught in Etinan. And during holidays I always enjoyed picking lawn tennis balls for him and his colleagues who were from Etinan. There was one simple question I asked: “where have you been all these years that I had been searching for you to introduce to my mother”? She laughed and we moved on.

In the evening, about two times we met again and I remembered that first, it’s happenstance, second, it is a coincidence and the third time it’s enemy action! I invited her to my office in Obalende to show her that I was real. That’s our story.

Grace: I didn’t grow up in Etinan as he said. It just happened that my parents were teachers in villages close to Etinan and had many friends in Etinan, so I was quite familiar with Etinan as we used to visit many families there. When we met at Qua Iboe Church, Barracks Bus stop, Surulere,  Lagos, he asked why I was late to church and I asked him why it was his business as he was also late to church.

Was there any opposition from anywhere?

Aniefon: None that I know of, at least not from my people. Having no father, it was not easy for her uncles and relatives to agree on a date for us to proceed on the consummation of our love. It took time and negotiations amid challenges. Eventually, we got married at the same Qua Iboe Church Surulere, Lagos on Saturday, June 2, 1990.

Grace:  There was none but the challenge we had was that my uncles didn’t give my husband the traditional wedding list; they kept tossing him up and down for two years so we had to go ahead with the church wedding in 1990 without my paternal relatives in attendance. Though eventually, they agreed to give the list after negotiation and we had our traditional wedding in December 1996.

What made you decide to go for your wife?

Aniefon: She was of particular appeal in terms of her simplicity, honesty, humility, and sincerity. I didn’t find any guile in her and she’s lived up to that!  What else would you look for in a woman, if she’s natural and lives naturally! When you find her you find peace, satisfaction, contentment. You’re naturally moved to stay on!

What qualities made you choose him above others?

Grace: His transparency, godliness, and sense of humour.

Aniefon: I told her I had been waiting to introduce a girl to my mum. I asked her: “where have you been all these years that you’ve allowed these young girls to toss me about”?

Grace: Can’t recollect exactly what he said but I didn’t find it easy making up my mind so a friend persuaded me to overlook a few faults and I heeded the advice.

Aniefon: I told my friend who was with me that same day: “remember this day of the Lord, you’ll propose the toast” And the guy, my friend, Isang Bassey, arrived in Lagos from NYSC in Kano in the wee hours of the wedding day.

When we had been joined and we were asked to face the church for introduction as husband and wife, my friend raised his hand from the audience and we shouted to ourselves! Remember, there were no phone services available then to enable us to communicate any confirmation or register challenges.

Grace: The fact that my husband kept me waiting for over an hour and his sense of humour as he was taking the vows. We also received a lot of support from his friends and my maternal uncle’s family.

Could you remember your first misunderstanding in marriage? And how did you handle it?

Aniefon: Can I remember? Am I sure we really had any? No, we just talk and agree; we discuss our proposals and decide.

Grace: I can’t remember; we hardly had misunderstandings but the main issue we had was his drinking habit and keeping late nights. But after a while, instead of quarrelling, I resorted to prayers.

What were the major roles each of you played in raising your children? What sacrifices did you make in their interest?

Aniefon: We collectively took turns to cater for the children, knowing that training them is a collective responsibility. I recall that for two years of our marriage my wife had a postgraduate scholarship to study for M.Sc in South Korea. She was wondering how I would cope with the children in their early years. I encouraged her that they’ll be okay.

I took up the task of playing the double role of mother and father. God really helped me. The advantage I had was that this activity increased my bonding with the children as we were always together. As an active community and social person, I had to take them to my meetings and outings. All through that period, I kept them restrained. I would go with their meals and drinks. They saw from me and learnt the essence of community spirit.

Grace: We both contributed immensely to raising our children. Because my husband had taken a loan that he was repaying to pay for our house, I had to bear the bulk of the school fees burden at a stage, but when they got to the university, he took over.

We both took care of school runs at the primary school stage. But when I had a joint Japan World Bank scholarship to go for my Master’s programme abroad, he had to do the school runs alone. Visiting our children in boarding school was mainly my responsibility except when I was engaged in official duties. At such times, he took over. Discipline was done by both of us.

He supported me most times when scolding the children when they misbehaved. I did all the cooking but early in our marriage, my husband helped out with cleaning, washing clothes, washing baby napkins and rocking the baby back to sleep at night. Later, we had many people living with us. I always initiated the morning devotion and had to wake everyone up to attend.

ALSO SEE: Knowing Your Spouse Before Getting Married And More: The Oziokos’ Share Nuggets From Their 50-Year Marriage

Aniefon: Everything about her. What I don’t like I tell her and she corrects herself. Yes!

Grace: His compassion and kindness. His ability to make fun out of very serious situations. His generosity; his respect for me and his belief in my career progression. He is very supportive. He is also a very confident man. I like a lot of things about him.  It’s not easy to mention just one aspect. He also believes in me and defends me.

Aniefon: We live with ourselves daily and we talk daily. If there’s anything I don’t like today, I tell her, and she makes amends. I may be the only problem, not changing immediately. I’ll take the time or may not remember to change. She learns to live with it and prays about it

Grace: Managing his finances.  He has improved significantly in other aspects through prayers and patience.

Aniefon: Marry your friend. Check and see whether you can live with her for life. Marriage is for life. Don’t manage it.

Grace: Marry your friend. Look out for godly character and integrity. Also, look out for potentialities and prospects. A person with entrepreneurship skills will be an added advantage.

In light of rampant divorce cases these days, from your own personal experiences, what advice would you want to give newly married couples on how to make their marriage last as long as your own has lasted?

Aniefon: Tolerate each other, so fulfil the law of Christ. You’re two different individuals, try and understand each other. Talk it over. Sort it out. Don’t fight it out. In fact, no gentleman fights or beats his wife! Do you want to box? Not that woman! Go to the boxing ring!