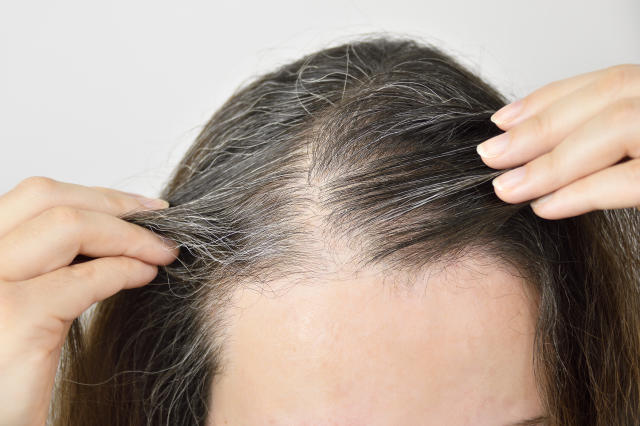 See Nigerian Men’s Reaction After Pharmacist Tweeted ‘As A Man, Keeping Your Pen!z In One Place Will Solve 50% Of All Your Problems’

A medical practitioner, Dr. Martin Adejo, has said gray hair in people could be due to genetics, disease, stress or deficiency in vitamins.

The physician said gray hair is not just for the aged as it has become a normal phenomenon in people across all age brackets, and that they now feel at home with the growth.

Dr. Adejo, who spoke with the News Agency of Nigeria in Jos, Plateau State, during a survey carried out on gray hair, noted that some people could have gray hair very early in life, from their primary or post-primary schools, but it does not imply that they are diseased.

“Gray hair on young people could be as a result of genetics, stress due to type of life or work engaged in or lack of certain vitamins. It could also be due to disease, but to be cock sure, medical checks are needed.”

Adejo said that the growth of gray hair should not be a worrisome development to anyone who had been certified medically sound.

“People should take the growth as a new trend. Getting worried over growing gray hair is not the solution, but that there should be attitudinal change to accept the growth as a fashion trend and enjoy the look.”

According to Health Harvard, a publication of Harvard Medical School, the vast majority of people with gray hair have age-related graying. It, however, stated that sometimes, graying hair indicates an illness, especially if it occurs at a particularly young age.

READ ALSO: These Are What Tight Braids, Relaxers Do To Your Hair According To A Consultant Dermatologist

“When and how thoroughly your hair turns gray is influenced mostly by the genes you inherit from your parents. Though stress may play a role in the process, it would be more helpful to look to past generations rather than your current stress levels to help you predict when or if you’ll go gray,”

It listed health problems that may be heralded by gray hair to include Vitamin B Deficiency, thyroid disease, neurofibromatosis (also called Von Recklinghausen’s disease), which is a group of inherited diseases that makes tumors to grow along nerves and also causes abnormal development of bones and the skin.

Vitiligo, a condition that causes melanocytes (the cells at the base of hair follicles that produce color) to be lost or destroyed — perhaps because the immune system “misfires” and attacks the scalp rather than an infection.”