Reality Star, Leo DaSilva Warns Of The Looming Dangers If Kids Begging On The Streets Are Not Given Educational Opportunities

Former big brother Naija housemate, Alex Asogwa better known as Alex Unusual has shocked many when she revealed that she was once proposed to.

In a lengthy post on her Instagram page, Alex revealed that she turned down the proposal and chose herself because the man physically assaulted her.

According to her, her former lover would always beat her at every slightest provocation and would blame his behavior on his upbringings.

She recounted how she once posted a photo of herself wearing his expensive shade after he gave her a black eye and everyone was drooling and praying for her kind of life, not knowing that she was suffering in silence.

She added that the guy’s mother was in some way supporting his behavior as she would always caution Alex not to upset him so as not to hit her.

Up until the later part of the epistle she wrote, it would be hard for people not to be convinced that Alex was telling her own story as she narrated a lady, Udochi‘s ordeal in her relationship.

Udochi should have been married to her partner last year but walked away from the relationship following how confrontational her partner, Andre is.

She decided to choose life instead of the abusive marriage despite the fact that Andre is wealthy and could have covered up the abuses with money.

“I almost got married last year. I mean I was proposed to but I chose me. I chose life. How can I be with someone that hits me? He always tried to show the world that we had a perfect relationship but I had a black eye and wore his expensive shades to cover it up. I can remember my caption when I posted that picture “Rich and getting it”.

I had comments like “show us the way, cut soap for me, you are the fashionista”. My dear your fashionista was covering her shame.

READ ALSO: BBNaija Star, Alex Unusual Shares Opinion On One Of The Factors That Leads To A Failed Marriage

I could have chosen to stay with him, won’t my children have to constantly watch their mum being hit? What kind of effect will it have on them? Will they be traumatized? Will they become bullies? Will they learn to hurt others?.

There are relationships where people are free to be happy. I wanted that. I wanted a happy family so, I sacrificed my unhealthy relationship before I sealed it.

I saw the signs and did what I need to do on time. Andre’s mother is also a bully. She will constantly tell me to treat her son like a king so he won’t be upset and hit me.

He will beat me for disagreeing with him, for complaining about his late nights, for smiling for too long, for not making fresh meals three times a day, for wanting to go out with friends.”

“In as much as he blames his character on his upbringing, ‘I was bullied in school, that’s why I hate being talked back at, my dad made me angry child, I am a Leo and you are aquarium Abi asparagus (whatever he calls it)’. Zodiac sign excuses to be animal.

He is an adult now and should know what’s wrong and right. He is so rich but wealth doesn’t guarantee health.

All these were word from Udochi during our conversation lasted week. I understand where she is coming from. Society is blaming her for still being unmarried, social media trills are bullying as usual but I respect her decision.”

ALSO SEE: BBNaija Star, Alex Unusual Chronicles Her Life As A Single Woman And It Sounds Like Fun

Alex finally advised people to quit abusive relationships and not be a bully:

“Choose you and your future today. Do not let your children become monsters because you chose to be with a monster. That’s if you’ll be alive to see your children after such decision. Don’t be with a bully.” 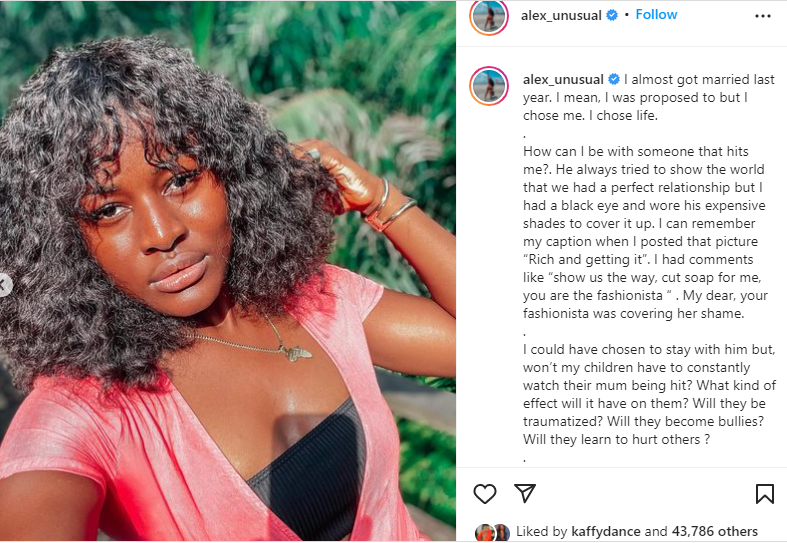