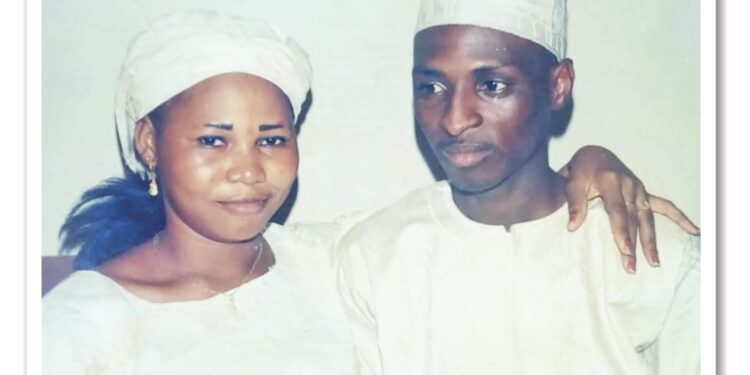 Malam Tunde Garba Ladan and Malama Sherifat Jimoh have been married for 30 years now. According to the duo, they began their relationship as boy and girlfriends.

Today, they are blessed with four children, some of whom are graduates, and happily married too.

In a recent chat with DailySun in Kaduna, the the couple shared the story of their marital journey, challenges and triumphs.

How old were you before you got married?

Sherifat: I was 24 years when I married him.

Garba: It is through the will of God. I was a photographer apprentice when I came across her through my friend who is now late. Then she lived with her elder sister in Ilorin, Kwara State. My friend urged me to go for her, advising me that she is a nice lady, character-wise.

I took courage and approached her but she turned down my request, saying that she was not ready for such relationship. However, I did not give up. I kept mounting pressure on her. She lived in the same compound with my friend. That gave me the opportunity to visit regularly.

After much pressure, she accepted to be my girlfriend. She was a goldsmith apprentice while I was a photographer apprentice, combining it with my secondary school education.

Sherifat:  He usually came with five of his friends to a place near our house in Ilorin. One day, he approached me wanting to befriend me. But I refused and told him that I am too young for such relationship.

I told him I was going through apprenticeship and needed to concentrate on it. But he kept on disturbing me, stopping me on the way each time my sister sent me on an errand.

He mounted pressure on me until God said he is my husband, go ahead and marry him. When my elder sister discovered that I had fallen in love with him, she no longer cared for me as she used to. But I thank God that today he is my husband.

When did you settle in Kaduna?

Garba: In April 1989. And, while in Kaduna, I decided to concentrate on what brought me to the city: looking for job. So I forgot about her. I eventually got a job with a commercial photo studio. I was employed as a photographic printer. I fell in love with the job.

Though there was no mobile telephone at that time, I did not even care to write her. However, as God would have it, she got my postal address from one of my friends in Ilorin and used it to write me a four-page letter. After reading from her, I became convinced that she is the kind of lady I would like to marry.

She fell more in love with me even when I was out of sight. And thanks to God, I did not look for another girlfriend in Kaduna. Her letter to me opened the floodgate of letter writing between us. She wrote and I replied. I wrote and she replied.

What were the contents of the letter?

Garba: (laughter). I have forgotten. But it was about the fact that she still loved me. She asked about my well-being in Kaduna. She was a bit worried about my interest in her since I was no longer in Ilorin. She actually wanted to know if I was still in love with her now that I had moved to Kaduna.

Luckily for me I had five age-group friends who kept eyes on her on my behalf. They were always warning any other man going for her to keep off because she is already for me. Even my elder brother too ensured that no man took the lady away from me.

SEE ALSO: Useful Advice From The Amaechis’ 60 Years Of Marriage On Keeping The Homefront

What was the letter about?

Sherifat: It is said that one does not value what he or she has until he or she missed or lost that thing. Few weeks after he left Ilorin for Kaduna, I began to miss him even though we were not too close then. But seeing him coming around me and our house almost on daily basis, made me feel a sense of being valued and loved as a young lady.

I went in search of his Kaduna address from one of his friends near our house in Ilorin. Luckily for me, I got the address. The following day I posted a letter to him, telling him to let me know whether he was still interested in our friendship or not.

I also asked him in that letter if he had gotten another girlfriend that he intended to marry so that I could find my way. His reply reassured me to wait for him. Thank God for effective post office in those days. Letters were delivered within few days of posting.

How come I wrote a four-page letter was still a puzzle to me; it must be have been lengthy. I must have repeated myself due to worry and youthful exuberance (laughter).

So when you finally decided to marry, was there any opposition?

Garba: There was. Her elder sister was not happy that I was befriending her younger sister. It was like she sister had another man in mind to give her. She insisted that I would not marry her younger sister. They are of the same father but of different mothers. She was only playing a guardian role to my wife-to-be.

When she finished her apprenticeship and fixed the date for freedom (graduation), I attended the ceremony in Ilorin. She told me about a family meeting in which her elder sister said she should pack out of her house if she must marry me, without giving any reason.

However, her uncle who was in that meeting summoned me through my elder brother, Tajudeen. He asked how serious I was about marriage to their daughter. I said I was very serious, adding that, that was the reason I attended her graduation, all the way from Kaduna.

Her uncle took my words to the family meeting and informed them that I was fully ready to marry their daughter. He even offered her accommodation in his house when the elder sister insisted that she must pack out. She did and stayed with her uncle until the marriage processes were concluded.

Sherifat: Not only did my elder sister oppose it without concrete reasons, she reported me to my mother in the village, and she summoned me. When I got there, I told her that I had made up my mind to marry him because he is the first man that approached me and he was not out to deceive me.

At this point, she gave me her nod and prayers. But my sister insisted that I should not marry him. She beat me several times because of him. Today, we are husband and wife and are blessed with children.

What were the qualities that you saw in each other?

Garba: In Islam, you don’t marry somebody because of beauty. But there is no doubt that my wife is very beautiful. You marry someone because of good character and dedication to the religion.

Sherifat: I didn’t see any quality in him immediately, but later on I realised that he is a man full of patience and endurance. And, he jokes a lot.

He is consistent and persistent. He was just being persistent in having me as his wife. He became the luckiest one among other boys that approached me. And I believe that it was Allah that led him to me. We are happily married.

As a Muslim, do you have plans to marry a second wife?

Garba: No, if I had plans I would have done it since. I have friends that have two wives, and each time they are discussing and I want to contribute, they would say, ‘this discussion is for men with two wives, keep off.’

Do you feel embarrassed when they say so?

Garba: Yes, I feel embarrassed but I don’t have the financial strength to take a second wife. Whatever my friends say, they are at liberty to say so. They have what it takes to marry two wives. I wish them good luck.

ALSO SEE: Resolving Misunderstandings And Many More: The Akpabios Share Advice From Their 31-Year Marriage

As a Muslim, if your husband wants to marry a second wife, what will you say?

Sherifat: There is nothing I can do. But I know that he doesn›t have the liver to pick a second wife. He would have done that before now. I used to tell him that all I needed from him if he wants to take a second wife is to give me first-hand information, to enable me prepare my mind for a partner.

It is better to hear from him that he wants to marry a second wife than to hear it from outside.  It is his right to marry two wives if he has the economic power and love for them.

What advice do you have for bachelors who are probably scared of marriage?

Garba: It is good to marry early, say, from the age of 24, 25 so that when children start coming they would grow up with you. As a bachelor, don’t wait until you gather all the money in the world before you get married. No.

The money you are spending on girls outside is enough to start marriage processes. Don’t be afraid to go into the marriage institution because God will not let you down.

What is your advice to spinsters who are probably afraid of going into marriage?

Sherifat: It is unfortunate that girls of nowadays want an already made man, man that has plenty money. But they fail to understand that marriage is not all about money. The little money can do wonders in your life if you use it wisely.

For me, it is a waste of resources to see a lady who is not working, carrying a handset worth N80 to N100,000. That money is enough to start a small business. This group of ladies can never appreciate little money when they get married.

What advice do you have on the rampant cases of divorce in the society?

Garba: Divorce in marriage is not the best option to peaceful relationship. It even worsens peaceful coexistence among family members of both parties.

No matter how bad the situation, marriage should be endured for God knows everything under the sun. Understanding each other is very important. Both Islam and Christianity frown at divorce. Therefore, it should not be encouraged.

Sherifat: The economy is bad nowadays. Many people hardly eat three square meals these days. We must endure with our husbands. Divorce is never the solution to hardship.