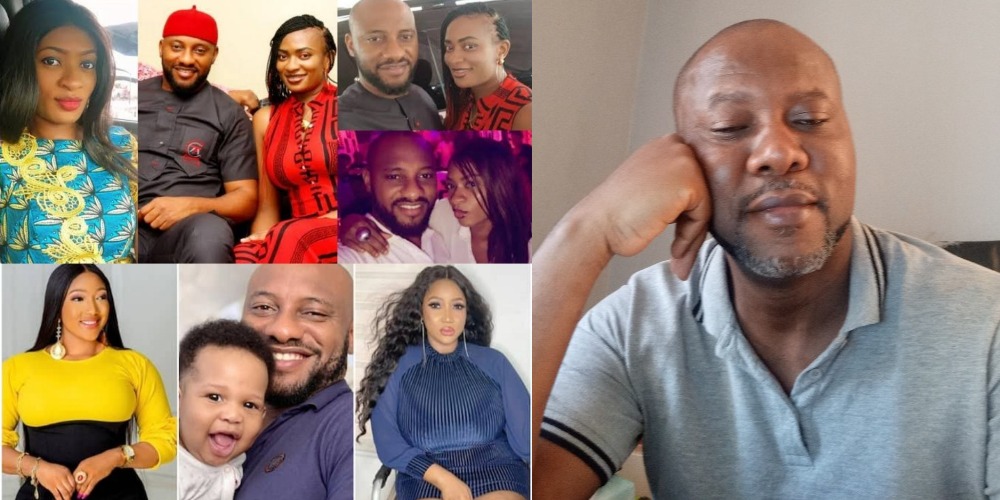 Uche Edochie, an artist and brother to Nollywood star, Yul Edochie, has spoken out about their family’s stance on the actor’s decision to marry a second wife.

On Wednesday, Yul went public about his second marriage to a colleague, Judy Austin Moghalu, adding that she already had a son for him.

On his Instagram page on Friday, Uche revealed that the Edochie family was not in support of the second marriage.

The artist stated that the marriage was unfair to Yul’s first wife of 17 years, Mary, who did not agree to be part of a polygamous marriage.

Uche revealed that Yul was advised against taking a second wife, but his younger brother stuck to his guns because he felt “marrying a second woman is the best way to own up to his mistakes and make things right.”

Uche also asked people not to be quick to judge his brother as women throw themselves at famous people “so bad that it is suffocating.”

Posting the picture of his nephew, Uche further wished the new couple the best of luck and advised his brother to consider taking up Islam as a religion in order to accommodate his new way of life.

SEE ALSO: Yul Edochie: ‘Many Actresses Knew Of His Affair With Judy And Were Hailing Her As First Lady’ -Actress Sonia Ogiri Blows Hot

”Hello guys. So my younger brother Yul Edochie just married a second wife out of the blue and Nigerians are freaking out. I get it. We are all shocked. I am a low key type of guy and I have tried to mind my own business but this circus is chasing me around too. So here is my take.

I see two main problems here. His first wife Mary, a wonderful woman and my sister in law did not go into a relationship with my brother agreeing to be part of a polygamous marriage. That’s the first problem.

So I feel for Mary. It is not fair on her. My family are not in support. This is not what we do and we are trying our best to console Mary. What else can we do?

The second issue is that Yul is not a Muslim. If he was a Muslim, no one will be talking about this. Muslims marry as many wives as they want and nobody says shit.

Traditional rulers and traditionalists of sorts do the same thing too and the Nigerian constitution recognizes polygamy as a legal marital union. Maybe we should burn that bloody constitution.

We told Yul not to do it. He did it anyway. Have you ever tried controlling an adult when it comes to relationships? Good luck with that. Yul is an adult who feels marrying a second woman is the best way to own up to his mistakes and make things right. It took a lot of courage for him to do this too.

A Muslim marries two or more wives and his people throw a party. Totally normal. A Christian does the same thing and he is the worst human being alive. It is tough.

Women throw themselves at famous people so bad that it is suffocating. If the average person walks in Yul’s shoes for one year, they will get five or more women pregnant. So don’t be quick to judge if you have not lived that life. Most people will do worse.

So this is Yul’s new baby with his new wife. Beautiful boy. Children are a gift from God. It is the circumstances of their birth that gets us all riled up about what’s right and wrong. I wish them all luck.

Maybe Yul should become a Muslim and shut this circus down. It is said that life is what happens when we are making other plans. I was minding my own business. And now this. Fantastic.”

ALSO SEE: Actress, Princess Shyngle Defends Yul Edochie, Gives Reasons Why His First Wife Must Not Leave Him For Having A Child With Another Woman

Uche’s remarks come hours after his brother, Linc Edochie, stated that he was not present when Yul paid the bride price for a second wife. 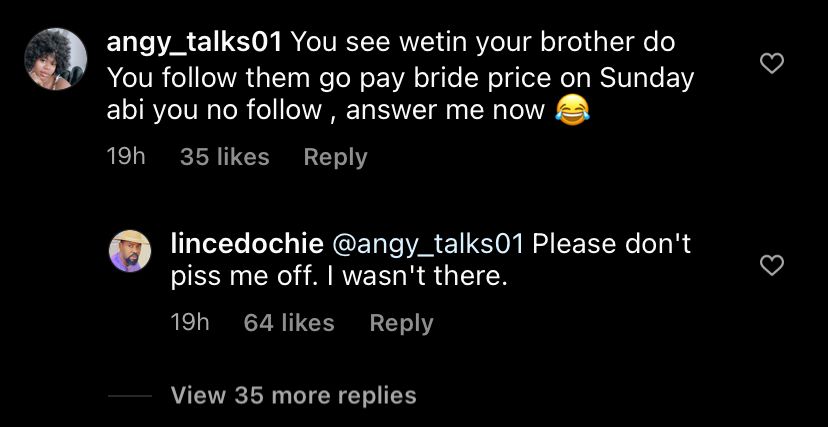 Yul, the last child of veteran actor Pete Edochie, married his first wife when he was 22 years old. The couple has four children together. 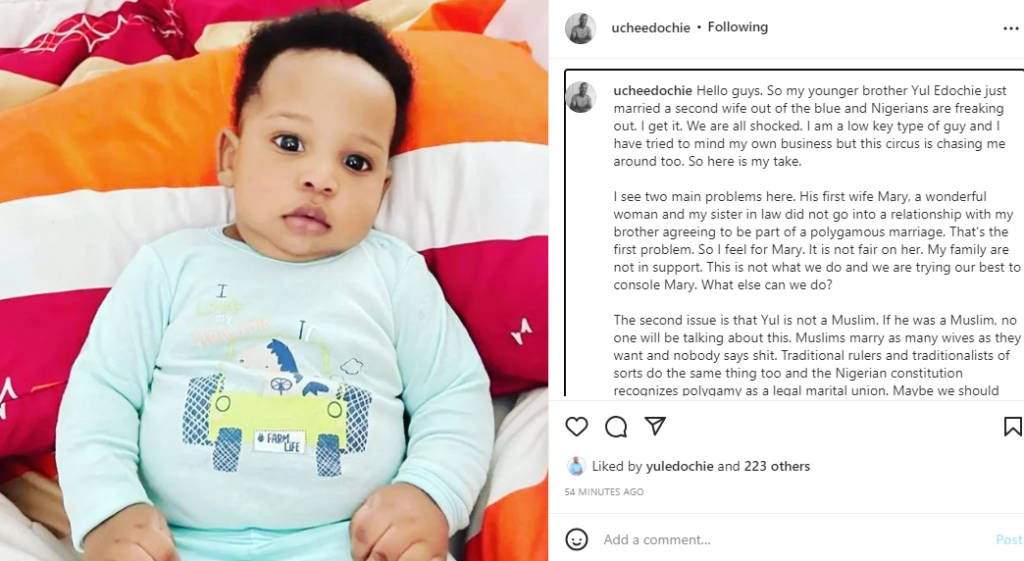