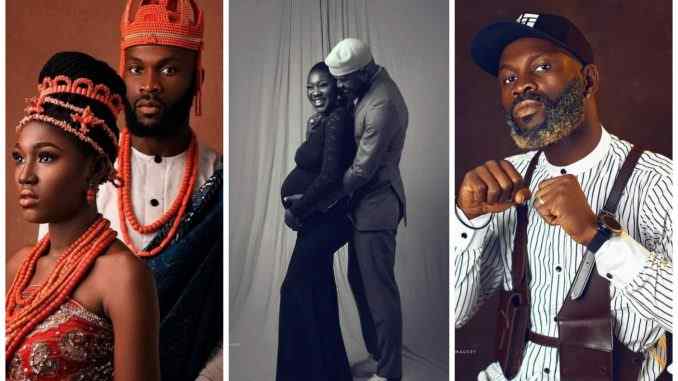 Nigerian On-air personality, Gabriel Akhuetie, was over the moon with joy when he recently welcomed a baby boy with his wife.

The couple who got married in January 2020, had suffered four miscarriages and after ‘so many challenges’ in two years before God blessed them with a son.

According to the broadcaster with Correct FM, the miscarriages affected him and also his career. In an interview with PUNCH, the new dad said,

“It (the miscarriages) affected me so badly that the last time I made music was about three years ago. As a matter of fact, I have offended a lot of people who wanted to feature me on one project or the other.

Somehow, I would find a reason not to come through for them. I cut off a lot of people and things, so that I could focus on my family.”

The Nigerian singer also disclosed that they visited gynecologists and did a lot of scans and tests but none of them could tell them the cause of the miscarriages. He said,

“All the scans and tests we did kept indicating that nothing was wrong with us. None of the gynecologists we saw could tell us the cause of the miscarriages.”

Speaking on how the experience affected his wife, the entertainer said,

“The series of miscarriages we had were usually in the first trimester. My wife would cry for days. The first pregnancy was conceived immediately after our wedding. We did not even know she was pregnant until we lost it, so we thought another one would come.

‘…Now I Don’t Even Have An Erection Again’ -CharlyBoy Reflects On His Past Mistakes And How Much He Has Evolved Over The Years And It Is Deep!

Then, we became more observant and immediately she got pregnant for the second time, we started seeing a doctor. But, a few months later, it happened again.”

He also stated that he had the biggest fight with his wife during the trying period. He said,

“The third miscarriage was when we had our biggest fight. It was so bad that we were practically not talking to each other. I remember coming back from work one day and she said she needed some money. But, she did not tell me what she wanted to do with it.

Usually, I would have just given her but I was curious to know what she wanted it for. We went back and forth for a while until she told me she wanted to buy candles for some prayers a pastor she met on Facebook told her to do. I was very angry. That was when I realised how deep she was affected by all of it.”