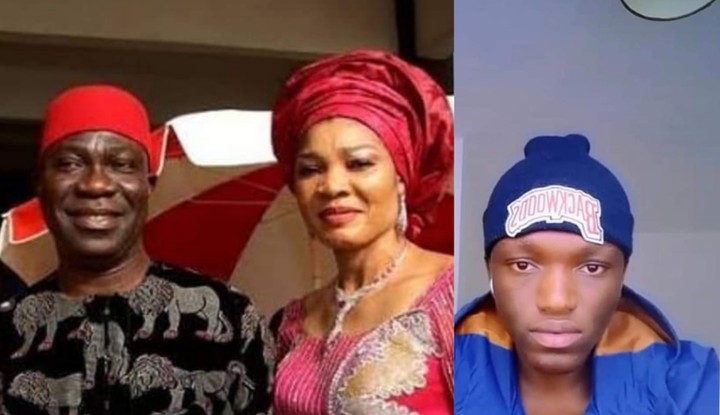 Embattled former Deputy Senate President, Ike Ekweremadu, and his wife, Beatrice, have sued the National Identity Management Commission (NIMC) and others following the controversy involving the real age of the kidney donor of their ailing daughter, David Nwamini Ukpo.

The couple were arrested on June 21 and arraigned before the Uxbridge Magistrate court in the United Kingdom for alleged conspiracy to facilitate the travel of Ukpo, alleged to be a 15-year-old, for organ harvesting.

The Ekweremadus however, denied the allegations and the court adjourned till July 7 for a hearing.

Trouble started for the couple when the donor went to the police to claim he was a 15 year old homeless boy brought from Lagos by the couple and that he was being treated like a slave in the UK.

In the lawsuit marked: FHC/ABJ/CS/984/2022, dated and filed June 27 by their counsel, Adegboyega Awomolo, SAN, before Justice Inyang Ekwo of a Federal High Court, Abuja, the Ekweremadus prayed the court for an order directing the NIMC to supply them with the Certified True Copy (CTC) of the biodata information of David Nwamini Ukpo. Others mentioned in the suit are the Comptroller General (C-G), Nigeria Immigration Service (NIS); Stanbic-IBTC Bank; United Bank of Africa (UBA) and Nigeria Inter-Bank Settlement System Plc as 2nd to 5th respondents respectively.

In the court papers, the couple said Ukpo’s National Identification Number (NIN):19438077110, which is in the possession of the agency, should be produced for the purpose of facilitating the criminal investigation and tendering same to establish their innocence with respect to Ukpo’s age in the criminal charges against them before the Uxbridge Magistrate Court.

They also sought an order directing the NIS C-G  to supply the applicants with the documents and application form of David Nwamini Ukpo in the possession of the 2nd respondent presented for the issuance of International passport No. BO0569974 for the purpose of assisting criminal investigation and tendering same before the Uxbridge Magistrate Court, UK  until July 7 in the alleged criminal charge brought against the applicants.

They also sought an order of the court directing the bank to supply the applicants with the Certified True Copy of mandate card and account opening package of account No. 0032551834 maintained by its customer, Ukpo, with Bank Verification Number 22509616391 in the custody of the bank, for the purpose of tendering same to establish the innocence of the applicants with respect to his age in the criminal charges filed against the applicants.

In the court papers, the couple also sought an order of the court directing UBA to supply the applicants with the Certified True Copy of mandate card and account opening package of account No. 2195739574 maintained by Ukpo with Bank Verification Number 22509616391 in the custody of the bank, for the purpose of tendering same to establish the innocence of the applicants.

Awomolo said that the application was brought in pursuant to Order 3, Rule 1 of the Federal High Court Civil Procedure Rules 2019, Sections 6 and 36 of the Constitution of the Federal Republic of Nigeria, 1999 (as amended) and under the inherent jurisdiction of the court.

The senior lawyer, who gave 20 grounds why the prayers should be granted, said the 1st applicant (Ike Ekweremadu) is a serving senator of the Federal Republic of Nigeria, representing Enugu West Senatorial District.

According to him, the 2nd applicant (Beatrice) is a chartered accountant, civil servant and the wife of the 1st applicant. He said:

David Nwamini Ukpo, offered to donate one of his kidneys for the daughter of the applicants if his kidney is compatible with that of Miss Sonia Ekweremadu.

David Nwamini Ukpo informed the applicants that he is Twenty One (21) years of age having being born In the year 2000.

The 1st applicant supported the visa application of David Nwamini Ukpo to the United Kingdom with a letter to the British High Commission in Nigeria, explaining the purpose of the visit i.e. to enable him undergo medical examination in the United Kingdom so that the donor and Sonia Ekweremadu get the best of medical attention.

After conducting various medical tests, the Royal Free Hospital in London decided that the said David Nwamini Ukpo was not a suitable donor because his kidney is not compatible with that of Sonia Ekweremadu.”

According to the couple’s counsel, Ukpo was then asked to return to Nigeria but rather than do so, he approached the authorities in the United Kingdom for protection from being returned to Nigeria. He said:

ALSO SEE: Senator Shehu Sani Sounds Note Of Caution To Those Who Are In The Habit Of Travelling Outside The Country With Their Housemaids

“David Nwamini Ukpo told the United Kingdom police that he is fifteen years of age contrary to the information supplied to the applicants by the same David Nwamini Ukpo. The applicants verily believe that  Ukpo was actually 21 or more having regards to the public records in the custody of the respondents.

The applicants were arrested by the Metropolitan Police in the United Kingdom on June 21 for the allegation that they brought a 15-year-old child (a minor) to the UK to harvest his organs.

The applicants were charged before the Uxbridge Magistrate Court, United Kingdom on the 23rd of June 2022 for offences of conspiracy to arrange/facilitate travel of another person with a view to exploitation, namely organ harvesting.

The court denied them bail and they are presently in the custody of UK authorities. The applicants require documents from the respondents to assist in the fair criminal investigation and as facts in their defence to establish their innocence of the allegation In the charge and to prove that David Nwamini Ukpo is not a minor and Indeed consented to the medical examination in the United Kingdom.

The said David Nwamini Ukpo is presently in care in the custody of British Authorities and he cannot be accessed by the applicants.

The documents being sought to be handed over to the applicants will support the applicants in their defence and establish their innocence of the charges brought against them.”

The lawyer said the application was made in the interest of justice. Also, Bright Ekweremadu, the elder brother of the lawmaker, in the affidavit deposed to, said Ukpo informed the couple that he was 21 years old, having been born in the year 2000, and was ready to help Sonia.

Justice Ekwo fixed July 1 for a hearing of the matter.