Laila Charani, the estranged Moroccan wife of Nigerian billionaire businessman, Ned Nwoko, has tendered a public apology to him on her Instagram page.

This is coming months after they went their separate ways.

You will recall that in November 2021, Laila who is actress Regina Daniels co-wife, took to social media to announce her divorce with the father of her three kids.

At the time, she wrote,

“Hello Guys, I just want to say that no one has the right to talk about my marriage. Please stop talking about people’s lives and I have divorced him already and nothing between me and him. Anybody following me because of him can unfollow please. Thanks. I’ll block any negative comment.”

Few weeks after the shocking announcement, Ned Nwoko released a statement where he revealed the real reason why their marriage crashed.

The Delta-born politician said Laila allegedly abandoned their kids in a hotel when they were on vacation in London and went clubbing.

Ned further claimed that she got into a fight with a male clubgoer at the club, and the police got involved in the case. He also disclosed that she contracted the dreaded coronavirus on her frivolous expedition.

He went further to reveal that Laila underwent a cosmetic procedure in London without his knowledge and approval, and accused her of playing the victim on social media.

Over eight months after their messy separation, Laila who has been on a long social media hiatus and deleted all her posts, has now apologized to him and his family.

In a post shared on her Instagram page some hours ago, Laila hinted that the cause of their fallout was because she “listened too much to outsiders.” She also said her actions were not intentional.

“This is to my entire Ned Nwoko family. I have realised that I made mistakes that are not intentional. I listened too much to outsiders and I have decided to apologise to my husband and other members of the family. I want peace and progress in the family.”

SEE ALSO: Billionaire, Ned Nwoko Finally Spills About His Separation From Ex-Wife, Laila: ‘No Reasonable Man Will Tolerate As A Husband’ 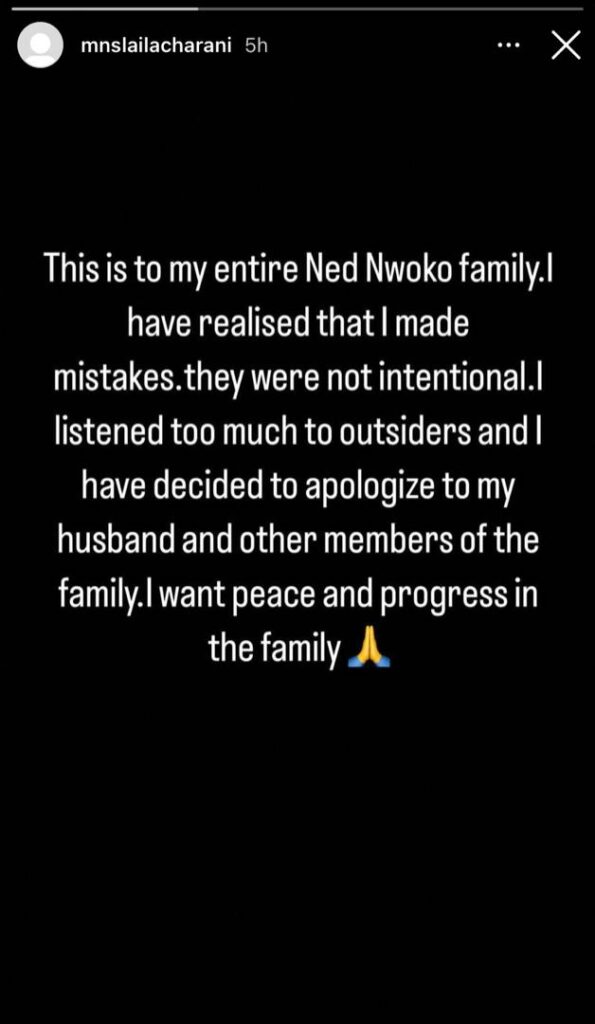