The BBC has reported that according to some officials, eight members of a team trying to raise awareness about Ebola have been killed by villagers using machetes and clubs in Guinea.

Some of the bodies – of health workers, local officials and journalists – were found in a septic tank in a village school near the city of Nzerekore.

Correspondents say many villagers are suspicious of official attempts to combat the disease.

More than 2,600 people have now died from the Ebola outbreak in West Africa.

It is the world’s worst outbreak of Ebola, with officials warning that more than 20,000 people could ultimately be infected.

Neighbouring Sierra Leone has begun a controversial three-day curfew to try to stop the spread of the disease. 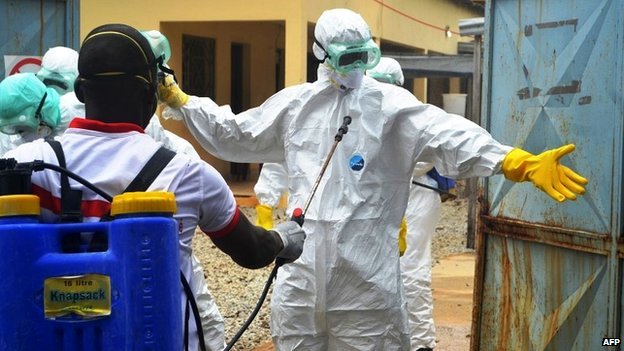 The team disappeared after being pelted with stones by residents when they arrived in the village of Wome – in southern Guinea, where the Ebola outbreak was first recorded.

A journalist who managed to escape told reporters that she could hear villagers looking for them while she was hiding.

A government delegation, led by the health minister, had been dispatched to the region but they were unable to reach the village by road because a main bridge had been blocked.

On Thursday night, government spokesman Albert Damantang Camara said the victims had been “killed in cold blood by the villagers”.

The bodies showed signs of being attacked with machetes and clubs, officials say.

Six people have been arrested and the village is now reportedly deserted.

The motive for the killings has not been confirmed, but the BBC’s Makeme Bamba in Guinea’s capital, Conakry, says many villagers accuse the health workers of spreading the disease.

Others still do not believe that the disease exists.

Last month, riots erupted in Nzerekore, 50 km (30 miles) from Wome, after rumours that medics who were disinfecting a market were contaminating people.