Actress, Meagan Good and her filmmaker hubby, DeVon Franklin, who met on set filming for the movie, ‘Jumping the Broom’ and committed to celibacy until they tied the knot in 2012, are out with a new book titled, ‘The Wait: A Powerful Practice for Finding Love of Your Life and the Life You Love.’ The book explains why saving sex for marriage is the key to a successful relationship. 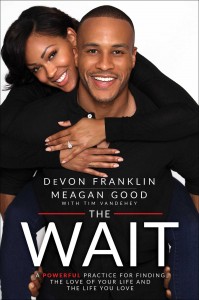 Franklin, who is also a preacher, said his decision to remain celibate starting ten years before marriage was inspired by his spiritual belief in an interview with CBS news. He said,

“I didn’t want to live two lives. At the time I wasn’t practicing celibacy, but I was still talking about it, and I said, ‘You know, I have to be the man that God called me to be,’ and part of that was taking this vow and waiting until marriage and when I stared doing that it gave me discipline that helped me in every other area of my life.”

The couple said ‘the wait’ was important because sex can cloud people’s judgment when dating.

“When you take that out of the equation, you actually get to know the person across the board in every other way except the physical which, which comes later,” Good said.

The book has received mixed responses from the public and press.

“She had a string of romantic liaisons throughout her teens and early 20s, including Lil Wayne, 50 Cent, Nick Cannon, Jamie Foxx and former Kansas City Chiefs running back Thomas Jones — but it wasn’t until one of her beaus cheated on her that Good began to consider celibacy.”

Meagan however denied the accusations in a call to ‘The Breakfast Club’ radio show today. She said,