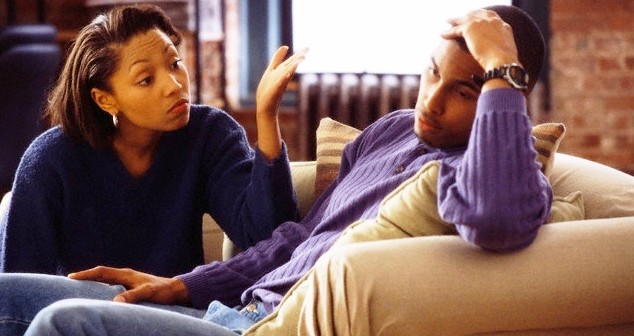 1. Badmouthing. Some gossip about their husbands and paint them like the devil to every Tom, Dick and Harry. They sugarcoat their husband’s excesses, deliberately leaving out their own faults, just so they can play the victim and be pitied, as they all describe the poor man’s alleged action(s) and personality with unprintable names.

These wives gradually make their sometimes not so guilty husbands lose the regard most people once accorded them while playing the submissive wife to their unassuming husband at home.

2. Poisoning the children’s minds. Thanks to their mother’s constant rantings about their dad’s shortcomings, some children start disliking and openly disrespecting their dad. Unfortunately, their mothers throw all their weight behind it, saying ‘he deserves it’.

3. Silent treatment. Whenever there’s a misunderstanding, in place of making their grievances known or accepting pleas to iron things out, some women resort to giving the silent treatment for days or even weeks to their husband’s utter frustration. They never get tired!

They communicate via only few syllable words, gestures, text messages or written notes when it’s absolutely mandatory to talk, keeping that scary ‘don’t even try to push it further’ look on their faces as a warning ‘this ain’t over just yet’.

4. Belittling. This is more common with women who are more placed than their husbands or whose husbands have no lucrative means of livelihood, making them the breadwinners. They’ll do just about anything to tell the man ‘whoever pays all the bills is really in charge’ and tell them to ‘man up!’ And it doesn’t matter if the kids, guests, friends or family are within earshot.

They constantly compare their husband to successful exes, brothers, male neighbours, friends’ husbands, and so on, oppress and tell their husband to do something with their life and stop being such a failure. In some cases, it’s not because the man is not making tangible efforts to empower himself, and their wife’s hurtful words sting and hunt them, often making them start thinking less of themselves. ‘Maybe I am a failure after all, look at my mates,’ some soon begin to think.

In order cases, the man is an hardworking average guy and really trying to make the family comfortable but the wife won’t let him rest as she’s always putting unnecessary pressure and making him feel unappreciated.

5. Starving. Whenever there’s a row or misunderstanding, some just cook for themselves and the kids alone, leaving their husbands to starve or ‘find their way.’ For others, intimacy is also denied.

6. Physical abuse. Men are victims of domestic violence too. Unfortunately, it’s hardly reported because, like some women, a vast majority of male victims prefer to keep sealed lips, perhaps because they do not want to be perceived as a weakling beat up and humiliated by ‘a mere woman’.

READ ALSO: Top Mistakes That May Utterly Destroy Your Marriage

7. Verbal abuse. Some women can’t just seem to stop their mouth from running. From outright cursing to name-calling, and so on, they have no limits and are not sorry about it. It’s become a vicious cycle.

8. Keeping secret investments. For instance, some women build houses without telling their husbands, and don’t care to advise him to put his money to good use. They encourage their husbands to squander money on extravagant trips, shopping and other conveniences, while they complain about their supposed meagre income which they are frequently putting to such good use.

9. Extortion. Some women, despite getting a good weekly or monthly allowance and having all their needs sorted by their husband, resort to always extorting their unassuming husbands by inflating number and cost of expenses. They always cover their tracks so well, their husbands never suspects any foul play.

While some housewives use these extra funds for daily, weekly or monthly contributions, working wives extort often exorbitant amounts to fund personal interests, including investments.

10. Cheating. Like some men, some women are chronic cheats and have no bounds. While some know just how to cover their tracks and pretend like the faithful wife, others are caught incessantly but always manage to warm their way back into the hearts of their husbands.

A few husbands however think they will never find a better woman or can’t deal with the pain and ‘shame’ of losing their wife, so they keep pretending they don’t see the obvious.

11. Giving everything but their husband enough attention. From their obsession with their phone to inability to create time for their husbands, and so on, some busy women are always making excuses, even though he can see how swiftly they seem to always create time for other things or people – their family, kids, friends, holiday, shopping, and so on.

12. Acting based on suspicions/hearsays. Some women let themselves be brainwashed by gossip from supposed concerned friends, who are perhaps only envious and out to destroy their marriage, without first confronting their husbands or trying to investigate the usually false claims. Their blood is already boiling ‘to make him pay dearly’ and they become irrational, constantly doing things that make their husband feel rejected and miserable.

This list is not exhaustive. Guilty parties should therefore reflect on the highlighted and several others, and start effecting necessary changes.