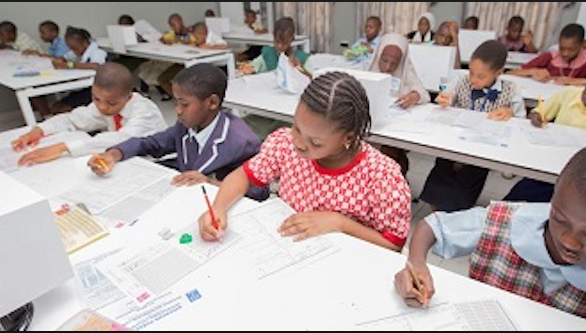 A young boy who emerged triumphant in the National Mathematics Competition, has opened up about how he achieved the incredible success.

The News Agency of Nigeria (NAN), reports that Samuel Oluwadare, a 14-year-old student who won the 2016 On-line National Mathematics Competition, says his success was due to hard work, parental support and prayer.

No fewer than 2,000 secondary school students across the country participated in the competition.

Oluwadare, an SSS 2 student of the Xplanter Secondary Schools, Ikorodu, told NAN that consistent practice of solving mathematical problems, tutorial from his teachers and commitment also contributed to his victory.

“I will not relent in my academic pursuit as my wish is to always be the best and be at the top in the future,” he said.

The genius appealed to government at all levels to improve the facilities that could enhance the standard of education technology in the country.

“Let us get more internet access in our schools so that Nigerian children can compete with their counterparts around the world,” he said.

According to him, the economy will be better improved through technology. Oluwadare urged Nigerians to maximise and positively use the online industry and get savvy with e-commerce.

Gbolahan Laniyan, the Chief Executive Officer of GLAN Consulting, also said in Lagos that over 2000 secondary school students all over the federation participated in ‎the competition.

According to the CEO, the competition took place online on December 5, 2016 ‎while the award ceremony took place recently at the Mathematics Academy, Remo in Ogun state.

He said the winner was given a plaque and an award for his feat. Oluwadare was appointed the Ambassador to represent Nigeria and Africa in the 2015 World Education Games due to his outstanding performance.

He was adjudged to be excellent in solving mathematics problems and was selected from about six million students that participated globally.

Truly, hard work is the key to success!