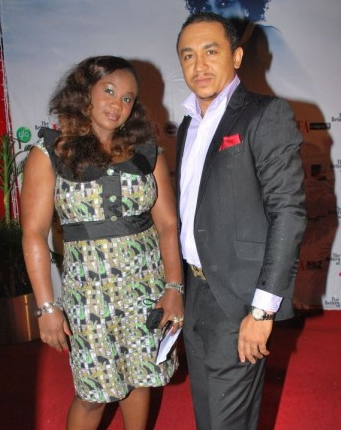 Media personality, Daddy Freeze has debunked the allegations of domestic violence and infidelity hurled at him by his ex-wife, Opeyemi Olarinde.

This comes in reaction to an interview granted by Opeyemi Olarinde, regarding allegations from two social media accounts with the same name – @andelasmith.

”Greetings to you all… You see, it’s a good thing I called out the fake account ‘Andela’, because it is now obvious who was behind it all along.

Why are you doing this? And why at this time? I am tempted to start releasing real evidence, but you know what? I won’t… Because I won’t comment on a matter subjudiced by the court.

You told the judge that I was destroying your name and the judge ordered me to stop giving interviews. I even have a text I sent Mo Abudu, so the interview I did with ebony life could be taken off the screens, and what do you do? You now go and give an interview of yours, after you have tied my own mouth?????

Why are you so angry that I am in a better place right now? You told my parents at the last family meeting that we had, that I was going to die without you in the presence of at least 7 witnesses, 3 years ago, are you so sad that I am alive and well? Why is it peppering you?

You gave me the worst union a man could ever have, the worst marital nightmare ever, yet I thank you for it, because if I hadn’t tasted a bad union, I won’t ever be able to appreciate a wonderful one.

You claim I come from a violent family, na wa o! Can you own up to the world about the circumstances in which your father, Samuel Oni died? I want you to use your own mouth to say it.

Ope, whether you like to admit or not, I’m wonderful with children. Many times when I’m preaching, my son would sneak into my live videos, he even takes his mum’s phone to call me at work. People viewing my live stream videos can attest to our closeness so why try paint me black and accuse me of violence against my other son?

The other day I wrote an article about @teebillz323 and the reality of depression. Do you think I wrote it because I like to write? No, I wrote it, because of the SEVERE DEPRESSION I experienced as a result of living with you and the point of suicide it brought me to! I’m over that now, thank God!

I started dating Benedicta, 4 months after you used your own hand to pack out. Does it seem short? Remember we stopped sleeping together for almost 2 years before you left.”