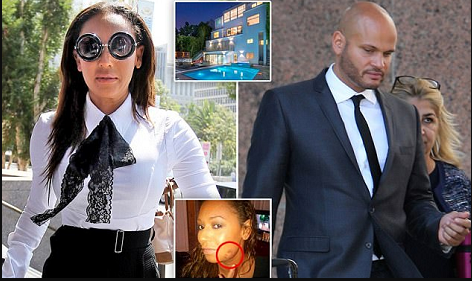 Horrible! Watch This Thug Viciously Batter Pregnant Girlfriend on Crutches in a Store

Mel B and Stephen Belafonte‘s divorce saga seems to be neverending.

New reports reveal that Mel B has just £961 in one of her company’s bank accounts due to her extravagant lifestyle. Her financial situation was made public in the courts this week as it was revealed her multi-million fortune has been wiped out.

The former couple who were married for ten years, are battling over money and custody of their children. Mel’s appearance in court was a confident one as she strode into the downtown LA court building in black pants, white shirt, lace tie and a pair of trendy black shades.

“She wiped out all her Spice Girls’ money, approximately £50 million if not more.”

Belafonte’s lawyer asked Judge Lawrence Riff to order the sale of the couple’s Los Angeles home if necessary. Their home is currently on the market for just £6 million.