A 13-year-old SS1 student of Brighter Academy Secondary School, Gashua, Yobe State who was abducted and allegedly kept at the palace of the Emir of Gashua finally regained her freedom on Sunday.

The good news comes just four days after Hauwa Dadi, daughter of a former Secretary of the Christian Association of Nigeria, was allegedly kidnapped for the purpose of forcing her into a marriage, Punch reports.

We have just left the Emir’s palace. I will call you later to give you the details.”

READ ALSO: Help! Father Of Girl, 14, Allegedly Married Off By Emir Of Katsina To Her Kidnapper Cries Out

Hauwa’s freedom from the palace of the Emir, Alhaji Abubakar Suleman, came after a civil rights organization, Stefanos Foundation, through its Executive Director of SF, Mark Lipdo, blew the lid off the alleged plot to force the teenager into marriage. 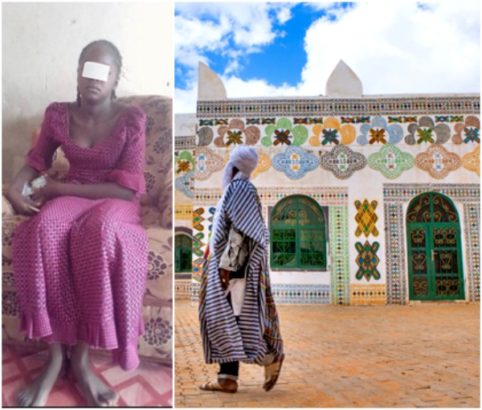 It was gathered that the Christian community in the Bade Local Government Area of Yobe State had been thrown into confusion, following the abduction of the teenager.

READ ALSO: Police Issue Statement On Girl, 14, Who Was Forcefully Married Off By Emir Of Katsina

”There was this boy who was said to have insisted on marrying the girl (Hauwa). They are in the same school. The matter was reported to the school management and the boy was punished and warned to stop harassing the girl.

Later, the girl was abducted and the boy was the prime suspect. The boy was arrested but claimed that the girl ran to the Emir’s palace because she wanted to convert to Islam.

We took the statement of everybody concerned. The Chief Imam said there was going to be a meeting on the matter.”

Hauwa’s mother, Deborah, had, in an interview, gave a detailed account of how the abduction plot was perfected.

”On Thursday afternoon, I had a meeting in ECWA Church, Gashua. Her twin brother, Zachariah, took wheelbarrow to fetch water for us. My daughter removed her uniform, put on her personal clothes and left.

When one of her sisters asked her where she was going, Hauwa said she was going to fetch water with Zachariah and disappeared.

But before the incident, there has been one boy who claimed to love her and wanted to marry her. He told her to convert to Islam.”

READ ALSO: “We Are Working To Legislate Against Early Marriages” – Emir Of Kano

Deborah said when she went to look for her daughter in the area, she heard that she had been abducted by her neighbours and was taken to the Imam of Gashua, Babu Alkali Mamman.

She then reported the matter to one Inspector Melody Habila at the Gashua Police Command.

But when Imam Alkali was invited to the police command, he pleaded to be allowed to take the Jumma’at prayers before coming but he never came.

Instead, the Imam’s lawyer later came to the police station and invited Deborah to the Emir’s palace.

When Deborah went to the palace, she was asked to come back, but on reaching there at 4pm, she was neither given her daughter nor allowed to see the Emir again.