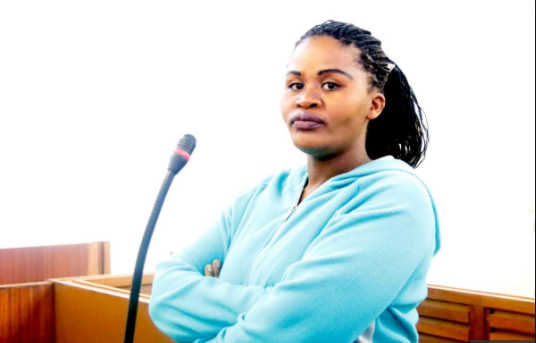 A woman has been arrested after she killed her 7 months old baby. Evelyn Jacobs was reported to have severely tortured the infant for 2 days in an attempt to perform an exorcism because she believed her child was possessed by demons.

In a report by IOL, some shocking details of how the baby was beaten to death were revealed in a South-African Magistrate’s Court on Wednesday during the bail application of the mother of the deceased.

Jacobs is accused of killing her baby after she and her co-accused, Emmanuel Welcome, apparently tried to perform an exorcism on the child. They claimed the baby was not human. . . but a snake.

Reports revealed that the court heard that the infant allegedly suffered ongoing abuse for about two and a half days in the hands of Jacobs and Welcome.
According to the testimony of the investigating officer, Detective Constable Kgositsile Taolo, the incident occurred after Welcome told the mother that her child was possessed by demons.
READ ALSO: ‘Witchcraft’ Mum Sentenced to 20 Years in Prison for Watching her 13-Month-Old Baby Drown

”According to the testimony of a witness who wishes to remain anonymous, on October 12, 2016, the accused (Jacobs) and a friend, Veronica, went to Welcome’s shanty on October 12 last year. Jacobs had her seven-month-old baby with her at the time,” Taolo told the court.
”When they arrived at the shack, Welcome said the child was possessed by evil spirits. The mother concurred and the two accused then beat the child with open hands across her body and head.
Welcome also took a Bible and started hitting the child with the Bible on her stomach. Later that night, the child could not sleep as she was in pain.

The witness said the next morning, she was woken up by the baby’s cries. When she looked at where the child and the mother, as well as Welcome, were sleeping, she saw them hitting the child with their open hands. She asked the two accused to stop, as they were hurting the child and could end up killing the baby.
They, however, continued and she (the witness) took the child. As she was about to leave with the child, Welcome grabbed the infant by the feet. A tug over the infant then ensued. The mother came and assisted Welcome and the two successfully managed to get the child away (from the witness).
The mother then placed the child on the bed and handed Welcome a rope, which she instructed him to hit the child with. Jacobs took off her slippers and hit the child with the shoes. The child was crying and the witness again tried to take the child, but was unsuccessful.”

READ ALSO:  Couple Arrested For Physically Abusing 11-Months-Old Son Over Alleged Witchcraft
According to Taolo, Jacobs took a sjambok (leather whip) and used it on the child. The witness could no longer witness the abuse and went out of the shanty and cried. 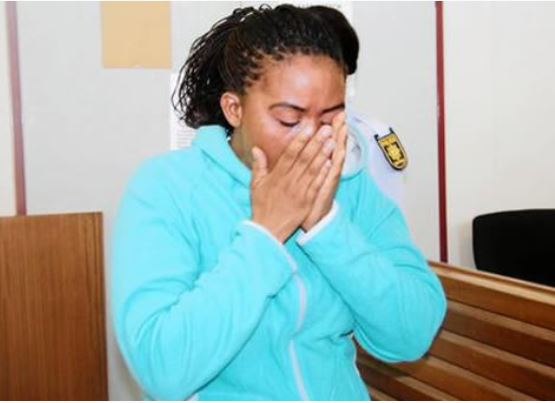 ”The mother followed her and told her not to worry about the child as they saw that the child was not human but a snake.”

Taolo said the mother returned to the shack and the abuse continued.

”The witness went back into the shack and saw the child lying on the floor. She again asked the accused to leave the child alone. She told the mother that they had to feed the child and tried to give it milk. As she was feeding the child, the mother took the bottle and poured the milk out.

She then mixed some salt and water and gave it to the infant. The child refused to drink the salt mixture. The mother again beat the child and Welcome took the jug containing the salt water mixture and poured it onto the child’s face.

The child then stretched out her hands and kicked as the water was poured onto her face. The mother said that it was a sign of evil spirits and that she was sticking out her tongue like a snake. The mother told the witness to step away from the child, warning her that she would suck her blood.

She then took the child by the feet and placed her on the stoep (a veranda in front of a house), close to a dog which was on a chain. The witness again took the child, fearing that the dog might bite the child. However, the mother grabbed the child and hit her over the head,” he said.

According to the witness, the situation got even worse after the child started crying again the next morning.

“The mother took a bucket with water and put salt, as well as cleaning agents, into the water. She mixed all the ingredients together and bathed the baby in it.

When she took the baby from the bucket, the child’s body was stiff and foam was coming from her mouth. The police and an ambulance were then called,” he said.

Jacobs’ legal representative, Meghan Kleinsmith, pointed out that the accused had already been in custody for a year and almost six months and argued that this was grounds for her to get bail.

The State, represented by Advocate Shareen Links, however, said that Jacobs had, during an earlier appearance, opted to abandon her bail awaiting the outcome of her psychiatric report. The results of the psychiatric report indicated that she was fit to stand trial.

The matter was postponed to later this month, awaiting a decision from the Director of Public Prosecutions on whether the matter will be transferred to a higher Court.