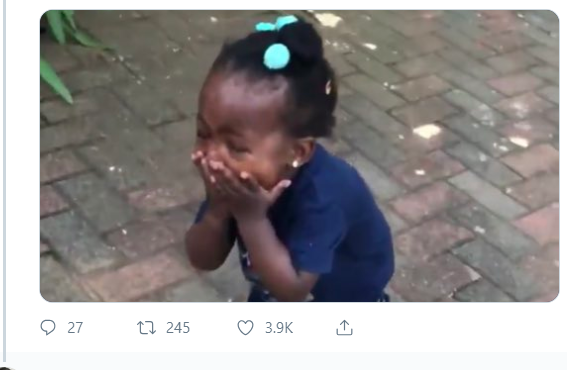 A two-year-old South African girl has warmed hearts on social media after a video of her surprise reaction to a birthday present from her dad popped up on Twitter.

The little girl was celebrating her second birthday and the parents decided to gift her a beautiful toy car. The youngster who was inside the house walked out from their compound to cheers from her father who wished her a happy birthday.

Not long after, the celebrant turned and saw the birthday gift sitting in a corner. The visibly surprised little girl bent down and held her mouth in excitement before she started talking to the dad.

The proud dad who was taking the video was excited by his daughter’s reaction and he was heard speaking to her in their local language.

The elated dad who posted the video on Twitter wrote: ”My daughters reaction to her 2 year birthday present was just priceless ❤️❤️.”

The video has since gone viral.

My daughters reaction to her 2 year birthday present was just priceless ❤️❤️ pic.twitter.com/SmAslUpmfk

READ ALSO: This Nigerian Mom’s Reaction To Her Surprise Birthday Gift From Son Is Hilarious And Heart-Warming| WATCH!