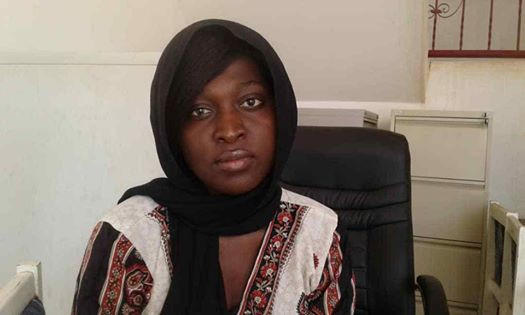 Two human trafficking victims Fatou Badjie and Amie Jobe have narrated their horrific experiences in Lebanon and Egypt respectively. The young women shared their tales of horror with The Chronicles to sensitize young girls about human trafficking and help combat it.

In the interview, 23-year-old Badjie (pictured above) revealed that immediately after she graduated from the university, she was approached by a close friend about employment prospects in Lebanon.

The friend told her that there were job opportunities and if she decided to go there she’d earn a decent salary. She felt strongly that the friend would wish her nothing but success. Badjie, a Gambian agreed to go to Lebanon. She recounted:

“So I just jumped into it without asking questions. He came with a document and I signed it without hesitation.”

In the signed document, Badjie agreed to pay D3,000 as deposit before her friend would process her travel documents. To her, this was an opportunity to get her family out of poverty. She said:

”I paid the money and the next day he brought my passport and visa. Everything was intact. The following week, I left for Senegal.”

Excited and hopeful, the young woman boarded a plane in the early hours of 26th June 2014, and flew more than 3500 miles to Beirut in Lebanon.

“I met an immigration officer who immediately took my documents and asked me to follow him. He took me to a small room where I found over 100 girls of different nationalities.”

One of the girls told Badjie that she was sold by human traffickers. She became scared and confused. She stayed awake the whole night wondering what would happen to her the next day. In the morning, she confirmed she was in trouble. She narrated further:

“Some women came and started touching me and the other girls. One of them touched me and asked me to follow her. She told me that she had bought me and that I was her slave. I started laughing because I thought it was a joke.”

This was when Badjie got to know that she was actually trafficked to be bought for modern day slavery. The woman took her to Hamra, a neighborhood in Beirut where she laid down the house rules.

“She told me that my job was to take care of her husband who had cancer.”

Bathing the sick man, changing his clothes, carrying him on her back and feeding him became Badjie’s daily routine.

”I’d wake up at 6am and I would not stop working or go to bed unless the old man managed to sleep. I was so frustrated. I never thought I could go through this kind of trauma in my life.”

When she got fed up, she approached her boss and told her she wanted to leave. She says:

“I told her that the contract I signed in The Gambia said I was coming to Lebanon to work in a restaurant and earn a living. She told me she spent a lot of money on me and I’d have to pay the money back before I could leave.”

Badjie was compelled to stay on even though she never received any salary for her work. But her conditions worsened after that conversation with her boss. She’d put a hot place of rice on badjie’s back and eat from there. Other times she’d face more severe punishment than that.

One day she accompanied the boss to the hospital not knowing there was a plan to do an operation on her. Badjie revealed:

“When we went to the operations room I was scared. She told me to sit and wait. As I was waiting, I dozed off and I didn’t remember anything. When I woke up I realised that I was operated and my left kidney was removed, without my consent.”

It would later emerge that the boss’ sick husband was in need of a kidney and Badjie’s kidney was given to him. Even with one kidney removed, Badjie’s nightmares continued.

She was arrested and jailed after cutting her boss with a knife in self-defense. In jail, she was regularly beaten and the guards made several attempts to sexually assault her.

After 18 months in jail, she escaped and ran away to a sea side. Through the help of a fisherman she met, she processed her documents and returned to The Gambia in April 2018.

Amie was trafficked to Egypt in December 2014 by a friend who worked for the immigration department. He told her that there were lot of job opportunities in Egypt and she’d earn up to $450 a month.

Once Amie, also a Gambian accepted the offer, the officer processed her passport and introduced her to a group of Sierra Leoneans based in The Gambia. They took her to Dakar and handed her over to another agent who helped her to get an Egyptian visa. She recounts:

“When I arrived at the airport in Cairo, my luggage was taken from me by two men who put me in their car and drove away. It was a 12-hour journey. When we arrived at our destination, they put me in a room and locked me in for about an hour.”

The men later confiscated her passport and told her that she was sold into slavery. For the next two weeks, she was locked inside the room. At the end of the two weeks, an Egyptian woman picked her from the agents’ house. She further narrated:

“The woman bought me. When I got to her house, she told me that my task was to take care of her three kids. From that day, the kids became my responsibility. She forced me to wake up as early as 5am to look after the kids.”

Three months later, Amie fell out with her boss after a heated argument which resulted to the boss hitting her. She wanted Amie gone, at 2am. Amie said:

“I told her I wasn’t leaving without the salaries she owed me for the three months I worked for her. She ended up giving me $50 instead of $450 a month. $400 went to the Nigerian agents who received me in Egypt.”

Amie had to walk 90 kilometers in the middle of the night. She stated:

“There was no car and I was imagining all kind of things. I could have been kidnapped, killed or raped.

Amie was indeed tortured by the police and sexually harassed by the Nigerian agents before she was able to return to The Gambia.

“There are so many issues that can’t be forgotten in this whole situation. I didn’t think that our own brothers and sisters would be so mean that they’d take us from our country and sell us out as slaves just for money. If you go through these things you can’t forget them.”

The Gambia is listed by the US State Department as a Tier 2 country, and its 2018 Trafficking in Persons Report, the State Department said the Government of The Gambia did not fully meet the minimum standards for the elimination of trafficking, though it was making significant efforts to do so.

“Gambian women are subjected to forced labor and sex trafficking in the Middle East, including Lebanon and Kuwait. Authorities have identified Gambian trafficking victims in Egypt, UAE, and Finland,” the US State Department said.