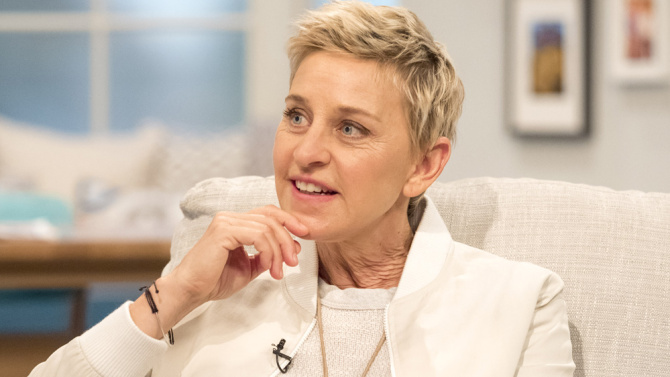 Every year millions of under-aged girls suffer sexual abuse in their childhood. The abuse can come from either family members or total strangers. While some report their abuser, some keep quiet about it for the fear of not being condemned or stigmatised.

Talk show icon, Ellen DeGeneres has spoken out in the past about being sexually assaulted as a teenager, and now, the 61-year-old is sharing heartbreaking details about how it happened.

In her upcoming interview on David Letterman‘s My Next Guest Needs No Introduction, the popular TV host reportedly spoke about how her mother, Betty, married a “very bad man” when she was a teenager.

According to Entertainment Tonight, ET DeGeneres explains that at the time, her mother had just been diagnosed with breast cancer and had one of her breasts removed. She said her stepfather used the scary situation to sexually assault her. She was only 15.

Again, ’cause I didn’t know about bodies, I don’t know that breasts are all different and … anyway, he convinced me that he needs to feel my breasts and then he tries to do it again another time, and then another time.”

SEE ALSO: 9 Ways To Prevent Your Child From Sexual Abuse

DeGeneres says at one point, he was trying to break down her bedroom door, so she escaped out her window, because she knew “it was going to go more to something.”

The American comedienne says she’s sharing her terrifying story now in the hopes that she can empower other young girls who are victims of sexual assault to come forward.

”I’m angry at myself because, you know, I didn’t — I was too weak to stand up to — I was 15 or 16. It’s a really horrible, horrible story and the only reason I’m actually going to go into detail about it is because I want other girls to not ever let someone do that.

We [women] just don’t feel like we’re worthy, or we’re scared to have a voice, and we’re scared to say no. That’s the only reason I think it’s important to talk about it because there’s so many young girls and it doesn’t matter how old you are.

When I see people speaking out, especially now, it angers me when victims aren’t believed, because we just don’t make stuff up. And I like men, but there are so many men that get away with so much. It is just time for us to have a voice. It’s time for us to have power.”

DeGeneres told her mother about the abuse but says that she didn’t believe her. She stayed married to him for another 18 years, eventually leaving him because he kept changing his story about the abuse. She still struggles with her mom’s reaction to the situation. She said:

“I always have taken care of her my whole life. So I just kept taking care of her. I didn’t really let it get to me. Until recently, I kind of went, ‘I wish I would have been better taken care of. I wish she would have believed me.’ And she’s apologetic, but, you know…”

When she first disclosed her assault in that 2005 Allure interview, DeGeneres, who came out publicly as gay in 1997, revealed that after her mother’s mastectomy, her stepfather told her:

“He thinks he feels a lump in (my mother’s) other breast, but he doesn’t want to alarm her so he needs to feel mine to make sure.”

DeGeneres, who did not name the man or specify how long the abuse lasted but told Allure he had since died, said he “made me lie down because he said he felt her breast while she was lying down.”

“I had to kick a window out and escape and sleep in a hospital all night long,” she recalled.

DeGeneres also clarified that the sad incident had no impact on her sexual orientation.

“People I’ve confided in about this before say, ‘Oh, that’s why you’re a lesbian. But I was a lesbian way before that. My earliest memories are of being a lesbian.”