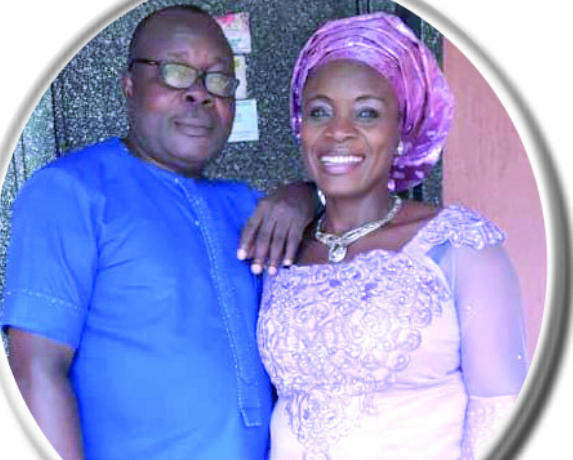 When the Onyenwekes tied the knot on July 28, 1990, they probably had imagined growing old together in a blissful union without a fight. In this interview with Daily Sun, the couple, Jude Kelechi Onyenweke and Silvia Chinonyerem Onyenweke, talk about surviving 28 years of being married to each other.

Read excerpts from the interview below…

Can you give us an insight into your background?

Husband: I am from Ahiara, Ahiazu-Mbaise in Imo State where I grew up before relocating to Lagos. I retired as a banker from Union Bank where I spent 30 years.

Wife: I am from Ezi-Udo, Mbaise, in Imo State. I grew up in the village before my elder brother who was a friend to my husband brought me to Lagos to stay with him in Surulere. I work with the Lagos State Ministry of Information. We got married in July 28, 1990.

Husband: As a young boy who got a job with Union Bank, then I was living alone in Surulere, Lagos State, I felt it was time for me to start a family, so I began the search. I spoke to a few persons and one of my friends gave me a tip that my best friend had a beautiful sister and I had never met her.

I was surprised because all the time I visited him in his house I never met her. So after the tip-off, I started patrolling their place until one day when I went to see my friend under disguise. I ran into her.

She was making her hair though but when I sighted her, I knew she was the one. I asked her if her brother was at home but she told me then that her brother had travelled and I explained myself to her that actually I came to see her.

SEE ALSO: Married For Over 3 Decades, The Odulana’s Share Secrets To Making A Marriage Work Despite Challenges And Obstacles

Wife: He was my brother’s friend and visited on a particular day. I went to open the gate when I heard a knock at the gate. When he saw me, he asked after my elder brother and I said he was not around and he said: “I came to see you actually, not your brother.” He said he wanted to marry me.

How did you propose?

Husband: The first time I visited and spoke with her, I proposed to her. I told her that I would like to marry her.

Wife: He was direct, the moment he saw me, he made his intention known.

What was her reaction?

Husband: She was shocked because I took her unawares but she told me to give her some time. Initially, she refused. She abandoned the street she normally took to work after I made my intention known.

Wife: I was surprised when he told me. I asked him if he wanted to kill two birds with one stone.

Husband: She was beautiful, homely and you know then the brother never allowed men to come looking for her, so it was difficult to woo her but I was determined because I knew them. He would scare men away who tried to admire his sister.

Wife: He was persistent. He knew what he wanted and did not give up until I accepted him.

Tell us some of the individual differences that your spouse had that didn’t change since you got married?

Husband: My wife is tender and soft-spoken, she was not the outrageous type. She knows how to cement a bond despite my shortcomings. Whenever I drink or smoke when I used to smoke and drink heavily, my wife would take care of me. She was very understanding, when it comes to my personality.

She spent her time studying me––my strengths and weaknesses ––and was able to work around them. She does not like going out or get together, among other activities. She prefers to stay at home. Also, she likes eating ‘swallow’. On the contrary, I was the last child of my parents and they pampered me to a fault. She had a lot doing just to make it work.

Wife: My husband smokes and drinks heavily, especially when he is upset, he is moody and has fits of rage, but I know how to stay away. I understood early enough that we all have shortcomings so that is his and I relate with  him based on that because it is a trait that won’t disappear easily even though we were married.

I have been able to use our friendship to stop him from smoking after he was hospitalised and the doctor’s report was scary. I maintained that he quit smoking as the relationship progressed and he did.

It’s 28 solid years and still counting. How did you come this far? Can you share your success story?

Husband: We made efforts to establish our relationship and ensure that we bond and reconnect to each other daily. Despite our differences, we balance things. My wife at the moment has a busy schedule; I am a retiree so we work around it. We have been able to work out a plan especially with other aspects of life that normally draw the attention of married couples. We are focused.

Wife: Other aspects of our marital life did not take away the romance in our relationship. We stand together no matter what – just my husband and I, no third party, including our five children. For instance, if my husband intends to discipline any of our children, I would support him.

My children watch us unite in the course of our parental duties and other issues. We don’t argue in the presence of our children. We dialogue over issues. He does not lord over me in his decisions. We agree on things. That is part of the reasons the love is still glowing. We gave the relationship enough time than other aspects. We did not centre our life on other things while the relationship suffers.

How do you resolve your conflicts?

Husband: Conflicts occur in any marriage but the ability of those involved to handle it right when it occurs is very vital. When we have issues or disagree, I would be angry but my wife would apologise, she tries her best to calm me by calling me my pet names. Even if I were angry, I would laugh. Marital relationships need effort from both parties if you want to enjoy marriage.

Wife: When there is a misunderstanding, I apologise to my husband. I use every means to calm him down so that the relationship becomes more productive. If he comes home and he does not smile, I ensure I find out what is making him frown rather than add to his trouble.

Sometimes, people can experience difficulties; they must learn to handle such challenges without fighting dirty and involving the whole neighbourhood. Every marriage has its challenges; the way it is handled makes or mars it.

There are many common problems in marriage and a lot of them can be avoided. Can you tell us some of the things that affect a marital relationship?

Husband: Cheating and extramarital affairs occur in a marital relationship for many reasons. These are some of the things that many couples are struggling to find a lasting solution to.  My spouse may prefer a particular meal due to her background but the longer we are together, the more likely we are able to share similar smell and taste preferences.

Over time, we tend to resemble each other in health, appearance and personality. I have been able to shift our eating habits and food choices as we go from being single to being married or living with a partner. Also, many people do not consider their life stages when it comes to a relationship.

In some cases, marriage issues occur simply because both spouses have outgrown each other and want more out of life from someone else. This is a common issue among married couples who have a significant age gap whether it is an older man or younger woman or vice versa.

Personalities change with time and couples might not remain as compatible as they once might have been. Couples with age difference, who are in different phases of life, face this problem in marriage.

Wife: Values and beliefs can differ in a marriage. One may have a particular religion while the other has a different belief. When I married my husband, we had the same faith, some cases might be different but couples must learn how to respect each other.

The wife must submit to the husband including his religion. The wife must follow his God; that will bring them closer. Most women do things that bring division in the homes. Again, the way people are raised and the things they were taught during their childhood can affect their core values.

Since everyone does not grow with the same belief system, morals and goals, there is a lot of room to dialogue rather than fighting. Moreso, when couples go through traumatic incidences, it just adds more challenge to their married life problems. Traumatic situations are other problems that couples may experience. A lot of traumatic events that occur are life-changing.

Tell us some marital recipes that can make a marriage last?

Husband: You should always see the best about your spouse, nothing else. You have to work together. That is both should have a team spirit. It seems obvious that it is imperative for a married couple to operate as teammates, but in reality, it’s hard to practise these days. One or the other would often think the other spouse was purposely trying to offend when they can actually share beautiful moments together.

Wife: Our lives are so busy, but my marriage is important and deserves time and attention. I ensure I spend time with my husband as well as my family, even if it’s only for 30 minutes. Everyday, I take some time alone with my husband simply to be together. I am extremely thankful to God for my husband.

I try to tell or show him that I appreciate him. I do this whenever I can, though I often forget–don’t we all? We have made a habit to do this every night. Before going to bed we tell each other one thing we appreciate about the other person and we share something we do that we are grateful for. It takes a few seconds, but it is a small way to strengthen our bond daily. It makes us feel good too.