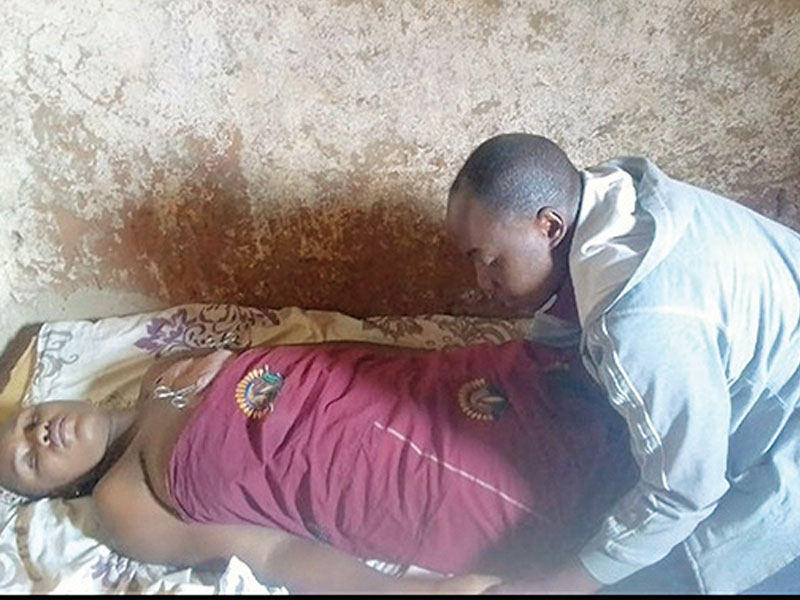 November 2018 will be an unforgettable month for mum-of-one, Gloria Chinyere Okwu; a beautiful and ambitious Nigerian woman, who had hoped to end the year fulfilling some of her dreams in good health. But life had other plans.

Gloria woke up one morning and noticed a lump under the skin of her breast. She didn’t know what to make of it rather than to approach her doctor for advice. She prayed it would be a mere lump or an insect bite. But she was wrong. Upon examination and a scan, the diagnosis showed it was cancer.

Apprehensive that orthodox treatment would cost a fortune among other fears informed by ignorance, the young mum opted for herbal treatment in Jos, but she escaped death by the whiskers. Gloria luckily retraced her steps on time, and she is presently accessing proper healthcare in Abuja, she shared her story with THISDAY.

As is typical with many other Nigerians, she went into panic mode. She knew cancers are expensive to treat, and the country does not have insurance policies that covers for cancer treatment for poor Nigerians. She went back home, not knowing what to do. She had no money. But cancers do not wait for its host, it grows nonetheless.

By the time Gloria went back to the hospital to see her oncologist, the lump had increased in size.

“I was scolded by my doctor for not following up the lump with treatment. I told him I had no job at the time of my referral and I only recently got one that wasn’t even going to foot the exorbitant bill,”

Nigerian oncologists hear this every day, especially considering that a huge number of the citizens cannot ideally foot the bill for the treatment of cancers. The oncologist picked up his phone, and called a nongovernmental organisation. But the NGO said it does not have money to fund her treatment.

Over two million Nigerians are currently living with various forms of cancers and over 80 per cent of them do not have the funds to treat themselves. While some NGOs have made efforts to help, there is only little they can do due to the high cost of treatment.

“That was how I started to cry. I was downcast the whole week. Christmas plans were officially suspended. I started making strategies on how to raise money for the treatment.”

“In the process of making enquiries on what options were available to me, someone told me about a herbalist in Jos. My informant said the guy curses cancer from its roots.

I was told he does not cut out the breast, he does not do mastectomy and radiotherapy. That all he does was remove the lump and offer concoctions, and that I will be healed.

My aunt was a testimony to his prowess. He had operated her cancerous breast and ‘took’ out all the lumps from her breast…so we thought.”

That was perhaps the best news Gloria has had in a while. As someone ready to fight the disease to a standstill, and considering she had limited options due to funding, she, along with one of her friends, hit the road to Jos.

“We left Abuja very early, and by 12:15pm, we alighted from the bike. The place is Kerang, a beautiful, hilly village, where bottle water is produced.

At the herbal home, I saw many patients, mostly women. Some had undergone the crude but often termed ‘successful surgery’.”

Gloria was excited. She saw people who told her they were recovering. In her mind, hospitals, chemotherapy and huge treatment cost can go to blazes. She told herself she was going to defeat cancer in that mountain.

“The man performed a minor cutting on me, and asked I go prepare for the main surgery.

I consulted and was convinced. I returned back to Abuja the same day and prepared in earnest for my second surgery. By December 27, 2018, I hit the road again, with my stove, small pot, blankets, wears, foodstuffs, some cash, my son and my care giver-my steadfast, patient friend.

The cold was unforgiving. We were given a small hut with no curtain, no electricity, no water, no toilets, just a small foam. But none of us cared. We just want to be fine.

I went in for the surgery the next day and was injected two doses of a certain drug. I didn’t sleep into oblivion like my first surgery, I just drifted. See, I was somewhere I can’t describe through the surgery. I still get scared when that memory surfaces.

While the herbalist was performing the surgery, I was conscious in my subconsciousness and I felt like my soul was literally being ripped out of my body.

I felt an unearthly pain as the knife cut through me and I heard myself scream. I was pressed through walls, twisted and stretched.

In my subconsciousness, I saw myself fall from scary heights into abyss. I even saw a coffin and was told I died. There were four faces in the “theatre” and I heard my friend’s voice: “Ndo nne, Ndo Gloria”. Then I heard him talking gibberish. He had four eyes and seemed to loom over me,”

She told THISDAY, that her friend said her eyes were open all through the surgery.

“When I came back to reality, I woke up and was held down to avoid hitting the two pairs of scissors on my chest. It was their local way of preventing bleeding from post-surgery.

‘After two days, the plasters on my chest were removed and four rough, deep holes stared back at me. Jesus!! I cringed at the sight. I could swear the herbalist touched my rib bones as he cleaned one of the holes.

“People checked in at the center everyday with all kinds of cancer. When the huts were filled, we shared rooms. Some were discharged before the New year… ‘lucky people’. My son and I spent the new year there with tasteless rice and sour gruel to wash it down.”

For post-surgery management, she was told to avoid pepper, goat meat and groundnut oil till the herbalist certifies her okay to take them. After eight days, Gloria returned home armed with herbs to drink and clean the wounds for proper healing. She was sure the herbal concoction will destroy the cancer cells still remaining in her.

When she got to Abuja, one of her friend even suggested they organise a small party to to celebrate her defeat of cancer. Under the deep cuts in her breasts were plasters, which she covered with clothes.

A month after, Gloria noticed another lump. By the time she went back to Jos to get more herbal medicines in January, the ‘clinic’ was wearing a new look. Everything was no longer right with the atmosphere. Some patients presented very scary conditions.

Some cried through the night. A patient she had met there earlier, died after lumps were removed from his back.

“A boy operated for mouth cancer returned with an aggravated sore and was rejected. I was scared. Then my aunt, who referred me to the herbalist; whom I thought was recovering well, slipped into coma and died! Her breast cancer had spread to other vital organs.”

It was at this point; Gloria came to her senses. She knew she was moving on a high way to the grave with the decision of jettisoning orthodox treatment for herbal treatment.

“I asked myself what I was thinking. I returned to National Hospital, Abuja and the doctors just shook their heads at my story. They questioned why I took such decisions and submitted myself to herbalist for surgery?

They asked if the herbalist did histology on me. I didn’t know what to say. I just sat there mute and looking at my feet. I was back to square one. They told me I must do chemotherapy and radiation.

I nodded sheepishly because I was finally convinced that if there was a herbal remedy for cancer, it wasn’t in Jos.

Some of the women I met there are going through treatments now. We wasted valuable time! I hope we are alright eventually.”

While Gloria is currently doing well with her treatment, even though she said it was costing her a lot of money she doesn’t have, she said she will continue to tell cancer survivors that there was no herbal cure for the disease.

“Every day I see people ask for other alternative treatments for cancer, and I hear weird responses and ill-advised measures.

Take it from me, I have been there! Don’t waste your time and money on treatments you can’t measure. Do the right thing and do it quickly,”

She also called on Nigerians to support persons fighting cancers financially and emotionally, as the treatment was expensive. The World Health Organisation (WHO) said between 30-50 per cent of all cancer cases are preventable, noting that prevention offers the most cost-effective long-term strategy for the control of cancer.

It called on countries to implement national policies and programmes to raise awareness, reduce exposure to cancer risk factors and ensure that people are provided with the information and support they need to adopt healthy lifestyles. It also advised persons fighting the disease to present early in hospitals for treatment or management.